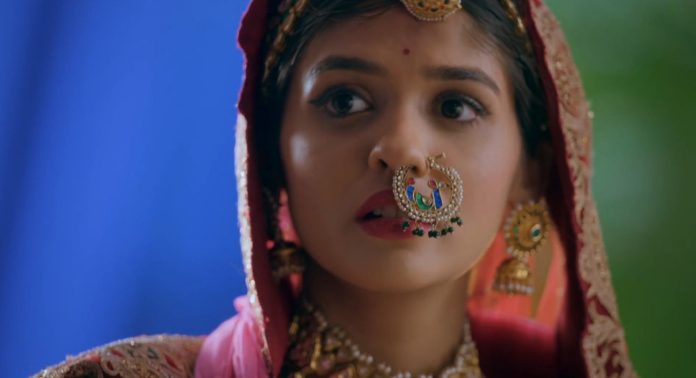 He tells Akshara that they will live 4 days in Birla house and 4 days in Goenka house. Abhimanyu asks Goenkas if they have any problem, if he will stay 4 days at their house. Everyone smiles with teary eyes. Abhimanyu tells Akshara that if she will still miss Goenkas then they will call them to their home. He says it’s not the old time, when a girl’s parents did not even drink water from her in-laws house. Abhimanyu asks Manish if he is right. Manish says he will have champagne as well as kachori prepared by Akshara. Abhimanyu asks Akshara if her fear and worries got sorted now. Akshara says yes.

Abhimanyu tells Akshara if she still has any concern, then they can perform Suhasini’s explained, “pher badal” ritual. He asks Akshar to go and live for 11-12 days with Goenkas. Akshara immediately says that she doesn’t have any problem nor is she crying. Vansh asks Akshara to directly say that she wishes to go with Abhimanyu now. Akshara gets shy. Abhimanyu tells Goenkas that farewell (bidaai) is just a ritual and he is just taking Akshara with him. He also tells Goenkas that Akshara will always be their daughter. Abhimanyu says only a plus one (man) has got added to Akshara’s life.

Suhasini and Goenkas fold hands in front of Birlas and request them to forgive them if they made any mistakes. Suhasini says the girl’s relatives/family may try hard but mistakes are bound to happen. Manjiri tells Suhasini that they are one family now and there is no discrimination between a bride (girl’s) or groom’s (boy’s) family. Manisha says he agrees to Manjiri’s words and wishes to start afresh with Birlas. He tells Harsh that he isn’t a father to a daughter and thus it might be difficult for him to understand him. He folds his hands and requests Harsh to take care of Akshara and her wishes as she is very precious to his heart. Harsh doesn’t properly assure Manish of fulfilling his request.

Neil requests Akshara to not ruin her makeup by crying more. Everyone laughs as Akshara starts checking her make-up. Abhimanyu jokes with Akshara in medical terms. Parth asks Akshara to learn not to cry from them as now even they will have to share their brother with her. Akshara cheers up a little. Shefali feels a little jealous. Both Abhimanyu and Akshara stand up. Abhimanyu thanks Goenkas for trusting him and giving him Akshara, who is a precious piece of their heart. Goenkas smiles with teary eyes. In a lower voice, Harsh asks Manjiri if Abhimanyu will for lifetime stand with folded hands in front of Goenkas for giving him Akshara. He says Goenkas didn’t do any favor to them by giving them Akshara as their son is the best (one in a million) and could get any best girl.

Manjiri says that Abhimanyu has chosen Akshara, who is the best and one girl in a million. This shocks Harsh. Abhimanyu asks Manish to not think that he lost a daughter but to think that he found and got a son. Goenkas feels proud of choosing Abhimanyu for Akshara. Manish and Neil joke. Parth says they will take Akshara with a pomp as they aren’t stealing her but has got her married to Abhimanyu. Abhimanyu and Akshara dance with their siblings on the drum beats. Later, Kairav makes Akshara sit behind Abhimanyu on the bike. Kairav asks Abhimanyu to take care of his sister. He kisses Akshara’s forehead and waves her bye.

Abhimanyu addresses Akshara as Mrs. Akshara Abhimanyu Birla. He seeks her permission to take her with him. Akshara sings in yes. She waves bye to her family. Everyone also waves bye to Akshara with teary eyes. Abhimanyu and Akshara stop near a holy tree. They tie a chunri to a tree’s branch and pray for their happy married life. Abhimanyu goes a little naughty with Akshara. Even Akshara acts naughty with Abhimanyu. Abhimanyu acts a little stunned seeing a drastic change in Akshara. Akshara shows her excitement about post marriage rituals and daughter-in-laws/home ritual tests to Abhimanyu. She explains to Abhimanyu the household chores tests that daughter-in-laws go through post their marriage.

Akshara tells Abhimanyu that he is very lucky as he won’t have to give any tests. Abhimanyu pulls Akshara towards him and asks her to take any test of his, like a romance test. Akshara gets shy. At Birla house, Neil and Manjiri are seen preparing for Abhimanyu and Akshara’s arrival, griha pravesh. On the other hand, Abhimanyu and Akshara make a video call to Goenkas. Goenkas explains to Akshara to perform every post marriage ritual properly. Akshara assures them that she understood everything. Goenkas teases Abhimanyu telling him that he won’t win from Akshara in finding the ring from milk.

Abhimanyu asks Goenkas what problem they have with his win. Swarna tells Abhimanyu that they have sent Akshara by giving her proper training. Suhasini tells Abhimanyu that it’s better if he loses in the first round itself. Kairav says Abhimanyu will get habituated. Abhimanyu teasingly tells Goenkas that he will give them thick injections, when they will meet next time, without any reason. Everyone laughs. Akshara shares her changed feelings with Suhasini. Suhasini explains to Akshara that God has given boons to women that they can hold on to one thing and leave the other at the same time, that too without losing balance. She tells Akshara that she very well understands her feelings.

After a small discussion, Abhimanyu and Akshara walk towards the main door/gate of Birla house. At Goenka house, Swarna and Kairav think about video calling Akshara. They wish to see Akshara’s welcome at Birla house. Suhasini stops and explains to them that Akshara went to her in-laws house, not school. Akhilesh asks Vansh to ask Neil to take Akshara’s welcome and post marriage rituals, so that they can watch it later. He says Akshara might not be remembering all of them. Swarna asks if Akshara will see her happiness at Birla house or their fondness. Vansh asks Goenkas to not take tension as he also already asked Neil to make a video of Akshara and Abhimanyu’s post marriage rituals.

On the other hand, Akshara fixes the flower rangoli outside Birla house. Abhimanyu and Akshara get shocked seeing the main door of Birla house closed. Akshara says it must be Neil’s plan. She caresses Birla’s name plate placed outside Abhimanyu’s house. Akshara rings the doorbell and excitedly waits for her in-laws to welcome her. Abhimanyu stares at Akshara with love. Main door opens up and Abhira gets shocked and confused seeing only Manjiri and Neil standing for their welcome/griha pravesh. Neil and Manjiri try to smile even being upset.

Reviewed Rating for Yeh Rishta 12th May 2022 Written Update Jaunty Akshara: 3/5 This rating is solely based on the opinion of the writer. You may post your own take on the show in the comment section below.