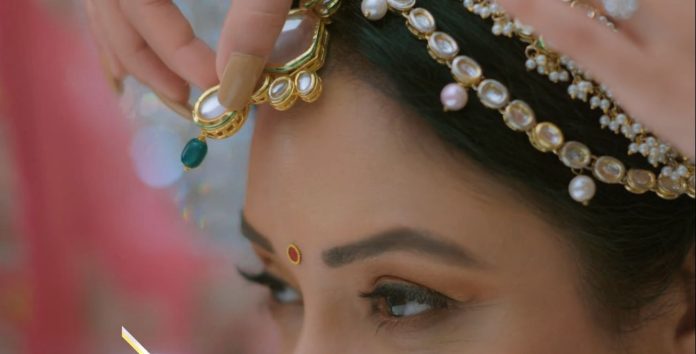 She says everyone knows that she doesn’t step back from her responsibilities. Anupama hugs both Pakhi and Kinjal. Kinjal and Anupama get over-emotional thinking about Anupama’s wedding farewell (bidaai). Pakhi stops their tears saying that their eyes will swell. Bapuji is seen sleeping in his room. Baa comes and makes noises in anger. Bapuji asks Baa why she doesn’t hug Anupama, if she is getting restless for her. He explains to Baa that good people’s goodness always wins over bad/evil people’s evil tricks. Bapuji tells Baa that Anupama’s just happiness will remain incomplete if she will leave without her blessings. He also tells Baa that her whole life will remain incomplete if she will bid farewell to Anupama without blessing her.

Bapuji sleeps telling Baa that her every breath will prick her like a glass piece and every moment will feel heavier. Baa will stand angry and shocked. On the other hand, Anuj and Anupama feel excited about marrying each other. Both of them dance excitedly seeing their wedding outfits. Later, Devika is seen confused and thinking what to wear during MaAn wedding. GK and Anuj ask her to take suggestions from Malvika. Malvika comes crying. This makes Anuj, GK and Devika tense. When Anuj says that Malvika might be pranking, the latter tightly hugs the former and cries hard.

Anuj says he won’t get married without Malvika’s presence/attendance. This shocks everyone. On the other hand, Kinjal, Paritosh, Pakhi and Samar are seen making preparations for Anuj and Anupama’s wedding. Paritosh and Samar tease Pakhi. Paritosh then teases Kinjal and Samar too. All of them wish they could get cold shikanji to drink while working in such hot weather. At the same time, Anupama reaches there with snacks and shikanji. Everyone asks Anupama why she got out in such hot weather, when it’s her wedding today. Anupama tells her children that she can sit in a shade and cool temperature room, when her hungry and thirsty children are working in such hot weather.

Pakhi asks Anupama how she got to know that they are hungry. Anupama tells her children that mother gets to know everything. She also tells her children that she won’t ever stop being their mother in any condition. Anupama’s children smile in happiness. Back at Anuj’s house, Anuj refuses to get married in Malvika’s absence. Malvika reminds Anuj that his dream of marrying his love Anupama is going to be fulfilled after so much struggle. She requests Anuj to not do this and understand her helplessness. GK and Devika try to make Anuj understand the situation. Anuj says he can get married after Malvika returns dealing with their parents’ dream house’s hearing.

Malvika requests Anuj to understand that Anupama will have to face backlash from many people, society and especially Baa and Vanraj if MaAn’s wedding gets postponed. She asks Anuj to at least think about Anupama as she might suffer a big shock hearing that her wedding is getting postponed. Anuj says he will call and directly tell her everything. He says Anupama will understand everything. Anuj tells Malvika that he will get married in her presence only after her return. Malvika shocks everyone by telling Anuj that she won’t ever return to him/India or show her face, if he will cancel his wedding. She says she knows that it’s unfortunate that she won’t be able to attend her own brother’s wedding.

Malvika explains to Anuj that everything doesn’t happen in people’s lives according to their wishes. She says life just runs like a train and doesn’t care about who boards it and who doesn’t board it or if someone’s station gets left behind. Malvika explains to Anuj that they can’t stop living and have to travel in the same (life’s) train. She says the show must go on. Anuj tells Malvika that he understands all this. He says he wants his full family in his wedding as he already has a small family, comprising just 3 people (Devika, GK and Malvika). He asks Malvika who will perform rituals in his wedding and dance like a crazy happy person.

Malvika asks Devika to handle everything in her absence. She asks everyone to take her leaving positively. Malvika wards off the bad sight/evil eye from Anuj. She requests Anuj to understand that Bapuji has put his surgery on hold for his and Anupama’s wedding. Malvika says Bapuji won’t be able to handle postponement or cancellation of MaAn wedding. She says she won’t ever be able to be happy if MaAn’s wedding gets canceled or postponed. Malvika tells Anuj that she will herself talk to Anupama and make her understand. She says she is sure that everyone will understand their helplessness.

She holds her ears in apology and requests Anuj to let her go. Anuj hugs Malvika. Anupama’s children on the other hand say that soldiers get leaves as well breaks but mother’s don’t get any day off. They say that a mother is never off duty. Malvika asks Devika to record her dance as she was going to dance on the same song during MaAn’s wedding. Malvika dances on the song “Pyara Bhaiya Mera” and tries to cheer up an upset Anuj. Devika records brother-sister. Anuj and Anupama share an emotional moment and Malvika leaves upset. GK tries to make Anuj understand and handle him. He tells Anuj that Malvika will talk to Anupama but he will have to handle Anupama in the end.

Anupama notices tension on her children’s fear about her farewell (bidaai). She explains to her children that she will get connected to new relations and responsibilities but they will always be most important for her as mother- children’s relation is above every relation. She says mothers wish for an extra 1 hour for spending time with their children but unfortunately have to take out time for her children from within days 24 hours only. Anupama promises her children that she will take out time for them anyhow even after getting indulged in new responsibilities and relations after her wedding.

In the next episode, Anupama and Anuj will be seen happily and excitedly getting ready for their wedding. Kavya will explain to Vanraj that Anupama saved them and especially him by not sending them to prison and instead helped them to marry each other. She will request Vanraj to pay off Anupama’s debt. On the other hand, Anuj will reach the wedding venue with the wedding procession. Paritosh and Samar will be seen dancing with Anuj on the song “Shadi Karvado” from the film “Jis Desh Mein Ganga Rehta Hain”. Anupama will get completely ready in a beautiful bridal attire for her wedding.

Reviewed Rating for Anupama Biggest Wedding twist 17th May 2022 Update: 3/5 This rating is solely based on the opinion of the writer. You may post your own take on the show in the comment section below.