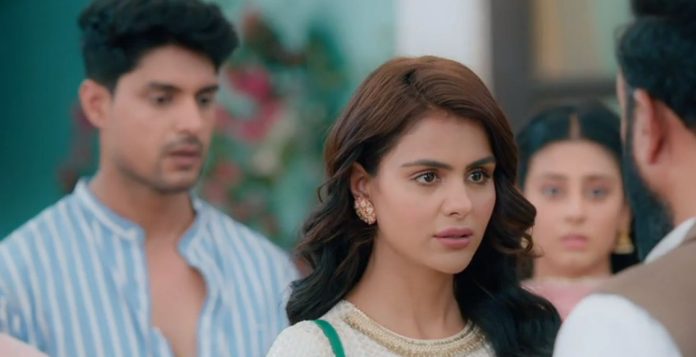 Udaariyaan New Tejo entry 18th May 2022 Spoilers Udaariyaan episode spoiler – Tanya becomes Tejo Fateh asks Tanya why has she come here. He taunts her if she has come to do her duty or trouble them. Tanya says that she is ready to be Tejo. Jasmine and Fateh are stunned. Tanya says that she knows a lot of Tejo but is scared that she might get caught. The Virk and Sandhu families are shocked to see Tejo with Jasmine and Fateh. Rupy declares that she is not his beloved Tejo.

Naveli and Agastya are playing with a ball. He informs Bulbul that a tiktok sound is coming from the ball. She is stunned. Meera tells her that the sound is not only a timer but there is a bomb inside it. She threatens Neelima and warns her to convince Bulbul to be Pakhi completely. Meera asks them to do as she says if they love Agastya and want to save him. Pakhi is in a fix.

Dhanraj makes Krishna ready for the wedding. Krishna feels that what kind of marriage it is in which there is neither love nor any hope. Sayuri thinks that there is no happiness or any possibility. He says that this is a marriage of duties and responsibilities. She says that it is a marriage of need and helplessness. Kusum informs Saroj that the marriage is done. She becomes furious.

Jeeto shouts at Mannat for coming out of her room and touching her son Gullu. She goes on talking ill about her and says that her existence is fake like her. Jeeto declares that she doesn’t want an unwanted illegitimate girl in her house. She says that no one wants her and asks her to get out of their lives. Zoravar breaks the glass tepoy in anger. Mannat is shocked.

Reynaksh asks Chanda to direct him towards the Amrut vessel. She makes an Om on the sand. Pratha informs Seema that the mahasangam she had started in the temple will finish here. She attacks Reynaksh with a Trishool. Seema declares that Pratha has defeated her in the first level but she will not accept defeat so easily. She is determined to do something. Reynaksh calls for Bannu and he comes with a gang of Nevlas.

In the flashback Chiranjeev is seen giving Sayuri’s hand in Krishna’s hand. Krishna puts mangalsutra in Sayuri’s neck. She cries and tells him that she will never consider him her husband. Krishna is alarmed. He remembers the promise he had given to an injured Chiranjeev that he will always take care of Sayuri. Krishna says that he has promised his brother that he will fulfill his every responsibility.

Banni Chow Home Delivery upcoming track – Banni-Yuvan’s bond:
Yuvan plays violin in the rain. He is the prince of a big mansion but his brain is equivalent to that of a small child. He refuses to eat food and throws tantrums, gets beaten up and hides under the table, and cries. Banni is a very badass girl of her colony, a great chef, and teaches lessons to goons. Yuvan and Banni meet each other in a temple. Yuvan doesn’t search for the taste in the food but for his mother’s love. His stepmother Maanvi is wicked but Banni stops her from beating him.

Muskurane Ki Wajah Tum Ho upcoming track – Katha’s depressive questions: Katha asks why a child needs a father’s name associated with them. She touches her stomach and asks if a mother’s name cannot be used. She sheds tears and asks to think about it. She declares that she is putting forth such questions because she has to make a decision. Will Katha get answers to her questions?

Radha Mohan upcoming track – Radha’s positive manifestations:
Radha tells that Mohan taught her a very difficult english word. She has written it on a paper and says that it is positive manifestation. She says that it means if we think good then good will happen. Radha says that the britishers have just learned about it but the ancient Ved purans have already told to think good and talk good. She says that the goddess Saraswati sits on our tongue once a day and it becomes true.

Sejal does her own Griha Pravesh and enters as the Nanda family’s younger daughter-in-law. She declares that when the goddess is there with her no one can do anything. She congratulates all the family members on her Griha Pravesh. Minal slaps Sejal. She reveals that Minal and Saras are not her parents from today. They both are shocked. 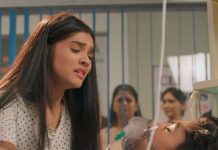