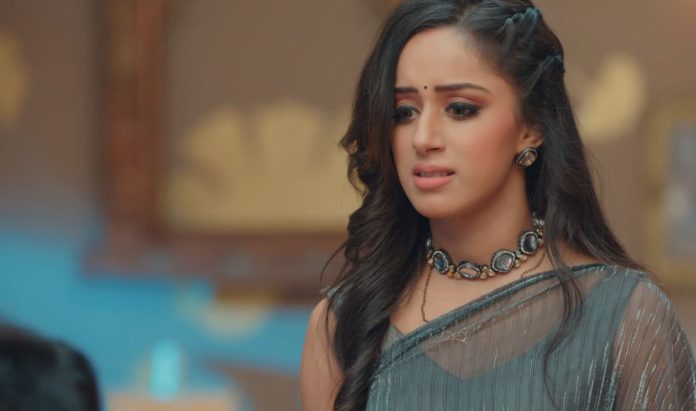 Yeh Hai Chahatein 19th May 2022 Written Update Prisha in danger Prisha tells GPS that Rudra us angry on her for hiding about Rajiv’s murder and murderer. She says she is ready to give time to Rudra to get normal and forgive her. Prisha tells GPS that Vasudha crossed her limits today and hurt Sharda badly. She says Sharda has always supported her even at times, when Rudra didn’t. GPS tells Prisha that even she knows that Vasudha doesn’t really mean whatever she blurts out in anger. He leaves saying that he will talk to Vasudha.

Sharda tells Rudra that Vasudha’s way of talking to her was wrong but not whatever she said about Prisha’s sacrifices for them. She tells Rudra that for one fault, they can break their relations with Prisha. Sharda asks Rudra, till when he will remain angry with Prisha. Rudra tells Sharda that for now, he is tense about something else. He reveals to Sharda that he saw Vasudha keeping her phone on charge and talking to someone on it during engagement ceremony preparations , through CCTV footage. Sharda asks Rudra why Vasudha will use her phone, instead of her own. Rudra tells Sharda that maybe Vasudha planned to trap her in the moon prop accident.

He says maybe Vasudha did this to save herself. Rudra tells Sharda that Vasudha can’t even think of hurting him and Prisha. Sharda agrees to Rudra and says it’s a big misunderstanding. She asks Rudra to forget all this and focus on functions and their family’s happiness. Rudra agrees and leaves behind a confused Sharda. Next morning, Revati meets Vasudha outside the temple, the latter often visits.She is relieved thinking that Vasudha did not see her with the man with whom she was plotting against Rudra-Preesha and their families. Later, Sharda is seen instructing the decorators about how to make decorations for Rusha’s haldi ceremony.

This shocks everyone. Prsuah starts sneezing due to her flower allergy. Seeing Prisha continuously sneezing, Rudra asks the staff to stop. He picks up Prisha in his arms and takes her to their room. Ruhi and Saaransh say they asked the decorator to bring haldi, not flowers. Sharda asks kids to discuss this later and see unwell Prisha for now. Rudra makes Prisha lie on the bed. He gives an anti-allergy shot to Prisha. Prisha gets better in some minutes. Sharda, Kids, GPS and Vasudha reach Rudra-Prisha’s room. Sharda asks if Prisha is fine. Rudra signs in yes. She says how flowers came instead of haldi. Vasudha asks Sharda to answer it instead of questioning.

This shocks everyone. Vasudha reminds Sharda that she saw her talking to decorators in the morning. Sharda asks Vasudha if she means that she intentionally did this. She says why she will do this to Prisha as she very well knows that Prisha is allergic to flowers. Sharda reminds Vasudha that she also saw her talking to the decorators and says that maybe she would have asked the decorator to keep flowers instead of haldi. Vasudha asks Sharda how she can even think that she will put her own daughter’s life in danger. Sharda asks Vasudha why she is doubting her then.

Vasudha tells Sharda she could harm Prisha as she is Prisha’s mother-in-law, not real mother. She also tells Sharda that she can for sure harm Prisha as Prisha hid about Rajiv from her. This shocks and worries everyone, especially Saaransh. Rudra sends Saaransh to another room with Ruhi. Sharda asks Vasudha why she took out Rajiv’s topic in front of kids, without thinking of the consequences. Vasudha remains adamant on her words and talks rudely to Sharda, shocking everyone. Rudra and Prisha stop their argument. On Rudra’s call, the supervisor comes. Rudra questions him who asked him to shower flowers instead of haldi.

Before the supervisor could say anything, Revati comes and says she exchanged haldi with flowers. She apologizes, saying that she just wanted to surprise Rusha and wasn’t aware of the fact that Prisha is allergic to flowers. Rudra and Prisha forgave Revati, unaware of her evil reality. Rudra and Revati ask Prisha to take a bath as she will feel better after it. Vasudha and Sharda again start arguing for blaming each other, earlier. Revati smirks seeing all this. Sharda tells Vasudha that Rudra saw her talking to the decorator, using her phone on CCTV footage. This shocks everyone.

Sharda accuses Vasudha of trapping her in the moon accident. Vasudha tells Sharda that she just went to charge her phone and received a call on it, which turned out to be a wrong number and then again put her phone on charge. She says she didn’t know that she would get so humiliated for just receiving a phone call. Sharda refuses to believe Vasudha’s justification. Vasudha asks why she will do this to her own daughter and son-in-law. Prisha and GPS asks Vasudha to stop and get quiet. Vasudha leaves angrily seeing no one supporting or believing her. Revati enjoys Khuranas and Srinivasans serious argument. Rudra asks GPS to tell Vasudha that they weren’t accusing her of anything.

GPS leaves asking Prisha to not take tension, as he will handle Vasudha. Rudra asks Sharda why she said so much ill to Vasudha. Sharda angrily leaves saying that Vasudha started it and she isn’t at fault. Revati feels happy seeing her plan getting successful. She thinks of doing something different, big and dangerous to Prisha. Revati recalls overhearing Vasudha and Decorator’s supervisor’s conversation. She angrily orders and threatens the supervisor to shower flower petals instead of haldi on Rudra and Prisha. Flashback ends. Revati smirks thinking about her next dangerous plan she made for Prisha.

In the next episode, Ruhi and Saaransh will send Rudra and Prisha in the same bathroom, shutting the other bathroom’s water. Rudra and Prisha will get stunned seeing each other. Later, Prisha will run and save Sharda from a snake bite. In the process of saving Sharda, Prisha will herself become the snake’s victim and will fall unconscious. Everyone will get worried seeing poisonous foam coming out of Prisha’s mouth.