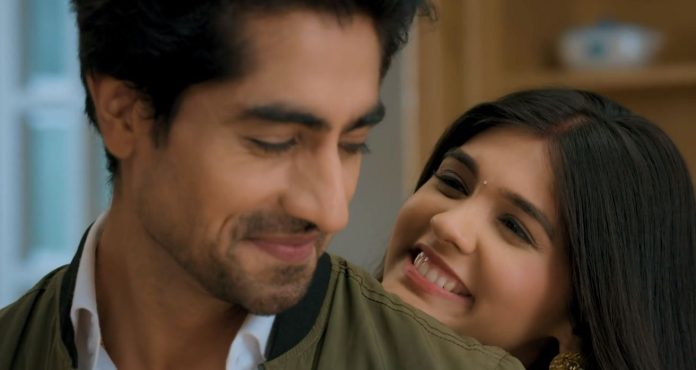 Abhimanyu feels tense about Akshara and her interview. Akshara video calls Abhimanyu with teary eyes. She tells Abhimanyu that he won’t believe that such people exist in this world. Abhimanyu reminds Akshara that he told her that the world is full of weird people, but she simply doesn’t believe it. Akshara tries to tell her experience to Abhimanyu but fails due to a lot of noise around her. She disconnects the call telling Abhimanyu that she will tell him everything on returning home. Abhimanyu feels worried for Akshara saying that she deserves to work at a better place than where she went to give an interview.

Abhimanyu gets an idea and decides to help Akshara secure a job at a place where she will enjoy working, be happy and have respect as well. He says even he will be at peace if Akshara will work at the place he has thought about. Abhimanyu calls someone named Doctor Vineet. Angry Aarohi enters Abhimanyu’s cabin at the same time. Abhimanyu sees Aarohi and asks her to wait for his call to end. This increases Aarohi’s anger. Abhimanyu reminds Dr. Vineet, that a new alternative therapy department was added in his hospital last year. Abhimanyu again signs Aarohi to wait for him outside his cabin. He asks Dr. Vineet how his new department is going/working.

Shefali, Neil and Parth notice the tension between Abhira. On the other hand, Kairav makes everyone have sweets, saying that he has good news for them. Everyone gets happy thinking that Anisha said yes to Kairav for their wedding. Kairav clears everyone’s doubt telling them that the good news is that Akshara got a job. Swarna tells girls and boys both should be independent. Kairav tells everyone that Akshara’s value will be maintained at in-laws home, if she will work somewhere else than Birla hospital. He says, otherwise it seems as if she got an undue favor. Swarna says Akshara and her work will remedy this thought forever.

She says that Akshara will make herself and her family proud. Aarohi feels irritated and more angry hearing Akshara’s praises from Goenkas too. At Birla house lawn, Parth asks Akshara, if she will work at two hospitals together. Neil says there is some confusion. Shefali says according to her Akshara should work at, “Sunlight Hospital” as it’s good and it’s CMO, Dr. Vineet is Abhimanyu’s good friend. She asks Abhimanyu if Dr. Vineet signed Akshara’s appointment letter. Akshara gets shocked knowing that Abhimanyu got her a job through his reference. Neil asks Akshara, what she wants to do. Shefali says there is nothing to think about here as Akshara will choose a hospital, where there will be someone, whom she knows.

She says that she is sure that Abhimanyu would have talked to Dr. Vineet thinking about the point she said. Neil says let Akahara make a decision herself. Parth says, everything seems nice at the interview time. He says Akshara will be able to make a right decision only after working at one of the hospitals for a few days. Shefali says Abhimanyu must have taken care of their family standards but maybe it wouldn’t have striked Akshara. Abhimanyu throws the “Sunlight Hospital” appointment letter on the ground and leaves angrily. Neil safely takes it out of the mud. Parth and Shefali ask Akshara if she and Abhimanyu didn’t discuss it till now.

Shefali tells Akshara that she thought that just the final decision is left to be taken/made. She also tells Askhara that it’ isn’t fair, if Abhimanyu made a decision for her, without considering her thoughts and opinion or without asking her. Shefali tells Akshara that it would be an act to control her. Akshara tells Shefali that everyone knows that Abhimanyu isn’t like what they are thinking. She requests Shefali to not give Abhimanyu’s concern, the name of control. Akshara says it’s not fair to call males’ concern for females as controlling. She explains that when male members of a family ask female members of the family to not go outside at night or to be careful and alert, they don’t want to control females but just care about females safety from wrong people outside.

Shefali tells Akshara that females can deal with wrong people as they are not less stronger than males. Akshara tells Shefali that it’s necessary to be alert and careful, while being strong. She explains that whatever Abhimanyu did was because he cares about her. Akshara says she feels lucky knowing that Abhimanyu takes out time to think about her and for her from his busy schedule. Neil and Parth feel good hearing out Akshara’s beautiful thought process. On the other hand, Aarohi once again recalls Rudra’s lies and grows angrier. At Birla house, Akshara stops Abhimanyu from screaming out his anger at the food processor, by switching it off. Abhimanyu makes a face after drinking his own handmade juice.

Abhimanyu respects Akshara’s wish to work at Trust Hospital. Happy Akshara jumps in Abhimanyu’s arms. Abhira drinks the juice together. They enjoy a romantic time in the kitchen. Hearing a servant entering the kitchen, they hide behind the counter. Abhira comes closer and plays a game. Abhimanyu wins and demands a kiss from Akshara. Akshara feeds different things to Abhimanyu. After eating green chillies, both of them feed ice cream to each other. Naughty Akshara secretly puts ice cubes inside Abhimanyu’s shirt. Abhimanyu runs behind Akshara and gets romantic with each other. As Akshara leaves to meet Manjiri, Abhimanyu seems disappointed with Akshara’s choice of workplace.

Akshara tells Manjiri that courage and dreams never catch rust. She says dreams and courage just get a layer of dust on them which can be easily cleaned. At the same time, Harsh rudely asks Manjiri to serve him tea. Manjiri runs to serve tea to Harsh. Akshara feels weird and strange seeing a fear in Manjiri’s eyes because of Harsh.

In the next episode, Abhimanyu will be seen apologizing to Akshara. Harsh on the other hand will be seen scolding Neil for signing some important hospital papers without anyone’s permission. Neil will tell Harsh that the manager requested him to sign, saying that he is also from the Birla family. Harsh will rudely tell Neil that he isn’t a Birla. Manjiri and Akshara will get shocked seeing Harsh’s harsh behavior with Neil. Akshara will tell Manjiri that she was kind of aware about Neil’s adoption. This will shock Manjiri. Akshara will decide to hide something important from Abhimanyu to stop him from being angry at his family/Harsh.

Reviewed Rating for Yeh Rishta 27th May 2022 Written Update Abhimanyu’s approval: 4/5 This rating is solely based on the opinion of the writer. You may post your own take on the show in the comment section below.