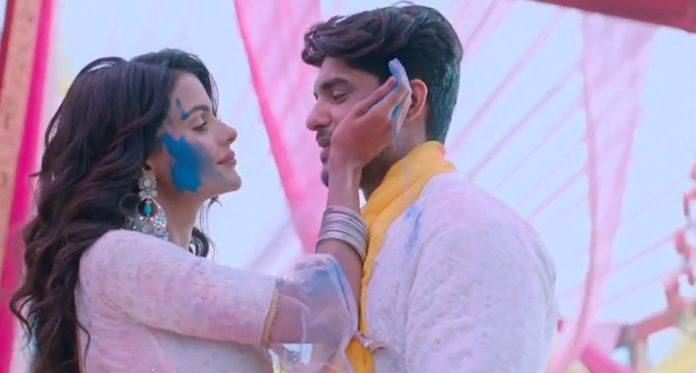 Udaariyaan 8th June 2022 Written Update Fateh Tejo meet Jasmine hands over Amrik’s stuff to Gurpreet and asks her to keep Amrik’s signs safe with them. Gurpreet tells Jasmine that she has Amrik’s biggest sign inside her (Amrik’s child). Gurpreet asks Jasmine to not say like that. She also asks Jasmine to give her some time, she will convince Fateh to marry her. Jasmine, knowing that Fateh is overhearing her, tells Gurpreet that she doesn’t want a forced marriage. She also tells Virks that she doesn’t want them to put any pressure on Fateh to marry her. Jasmine smirks, noticing Fateh getting pressured by her fake drama.

Fateh overhears everything and asks Tejo to see how helpless he has become. In Barnala, Tejo tells her friend that she won’t play hide and seek with Fateh as he will be her groom. She says Fateh will marry her and take her far with him. Tanya meets her mother. She gets hurt knowing that her mother doesn’t remember her. Tanya makes her mother eat food alone with her. She tries to make her mother remember that she has a daughter named Tanya. Tanya’s mother tells Tanya that she is lying. She also tells Tanya that if she would have had a daughter, then her daughter wouldn’t have left her alone in the ashram. Hurt Tanya thinks that she is helpless and will take her mother back with her in a few days.

Tanya’s mother asks Tanya tqo bring some water for her. Tanya happily goes outside to get drinking water for her mother. There, Tanya and Tejo again have a hit and miss. Tanya fails to see Tejo playing hide and seek with her friends. She once again fails to see that it’s Tejo who asked for water from her. Tejo’s earrings get stuck in Tanya’s dupatta. Fateh thinks about how he can marry Jasmine, when he still feels that his Tejo is alive. After this, Tanya receives Jasmine’s call. Jasmine instructs Tanya to call Fateh and tell him exactly what she tells her in a different way. Jasmine disconnects the calls as Tanya agrees to do what she said. Jasmine smirks very evilly. Tanya returns to her mother and leaves, finding her asleep.

Later, Tejo apologizes to her ashram caretaker for losing her earrings. Caretaker lovingly tells Tejo that she will make her wear another one. At Virk house, Fateh overhears Gurpreet telling her father-in-law that she is keeping Amrik to show them to his upcoming child. She says she will anyhow convince Fateh to marry Jasmine. Fateh feels hurt. He gets Tanya’s call and receives it. Fateh starts scolding Tanya for manipulating his mother to make him marry Jasmine. Tanya asks Fateh to stop getting angry and run to the hospital. She informs Fateh that Jasmine went to hospital to abort her child. This shocks Fateh and he disconnects the call.

Tejo in Barnala tells her friends that Fateh will get breathless while running to arrive and take her. Fateh runs outside the house to his car. Mahi stops Fateh and asks him what happened. Fateh tells Mahi that he is running to hospital as Jasmine is going to abort her child. This information shocks Mahi. Fateh starts leaving and asks Mahi to not let anyone know about Jasmine going to abort her child, especially Gurpreet. On the other hand, Tejo’s friends discuss with Tejo about Fateh. Tejo tells her friends that Fateh will surely come to take her and marry her. Fateh on the other hand, reaches the hospital and sees Jasmine talking to her doctor. He overhears Jasmine telling the doctor that she for sure wants to abort her child.

Jasmine gets angry at Fateh, when he tells her that they can find any other solution to her problem by peacefully talking to each other. She asks Fateh to ask Tanya and Gurpreet what other solution they have to solve her problem. Jasmine also asks Fateh if he will accept her upcoming child. She turns her face and hopes that Fateh will stop her from aborting her child. Fateh tells Jasmine that he has no way to stop her and it’s her decision at last. He also tells Jasmine that he can’t give her what she wants from him. Jasmine doesn’t show but feels irritated and angry with Fateh’s words. She angrily calls the doctor to take her for abortion procedure. Doctor asks Jasmine if she is ready. Jasmine replies yes.

Doctor instructs the nurse to make preparations in OT. Jasmine stops the doctor and requests the doctor to let her see her baby and hear his/her heartbeat one last time. Doctor asks Jasmine why she wants to do this, when she made the final decision of abortion. Jasmine tells the doctor that this abortion is happening became of her helplessness, not by her wish. The Doctor agrees to Jasmine’s request. Jasmine hopes Fateh stops her soon. Fateh overhears everything and feels bad. At Virk house, Gurpreet gets to know that Jasmine went to abort her child. Mahi and her grandfather try to stop Gurpreet from panicking. Fateh’s Grandfather tries to calm Gurpreet. He asks Gurpreet to trust Fateh as he won’t let Jasmine take any wrong step.

At the hospital, Fateh recalls Gurpreet’s requests to marry Jasmine for Amrik’s child’s sake. He also recalls Amrik requesting him to take care of Jasmine after his death. Fateh further recalls Gurpreet yearning for Amrik’s child. He also recalls Jasmine telling doctor that abortion is happening because of her helplessness, not by her wish. Fateh recalls Jasmine asking him if he will accept her child now. Jasmine gets worried thinking when will Fateh stop her abortion and agree to marry her. Fateh sees Amrik’s child’s scan from outside the ward and feels worried. Jasmine notices all this and smirks evilly.

In Barnala, Tejo tells her friends that she and Fateh will make halwa in the big kitchen of their big house after their wedding. Tejo’s friend asks Tejo to just call her to her house as she is like her sister. Tejo gets angry hearing the word “sister”. She starts screaming that sisters are bad/evil. Everyone gets shocked seeing Tejo’s condition. In the hospital, Jasmine tells her child that his/her mother is very bad. She also tells her child that she doesn’t want him/her to get alone in this world and thus is sending him/her to their father (Amrik). Fateh gets shocked hearing this. Jasmine apologizes to her child and takes a look at the guilty Fateh. Doctor tells Jasmine that she can once again think about her abortion decision.

In Barnala, the caretaker asks Tanya to bring some clothes with her next time. Tanya tells the caretaker that she will bring clothes tomorrow only. Caretaker runs to Tejo hearing her getting panicked. Tanya also tries to see who is beating thali in panic. Tejo keeps beating Thali and screaming that sister are evil/bad. Caretaker tries to calm Tejo. At the hospital, Jasmine tells the doctor that her decision is final and asks the doctor to take her to OT, before she falls weak. Fateh recalls everyone’s words, suggestions, requests and wishes. He stops the doctor and takes Jasmine with him to talk to her.

On the other hand, the caretaker keeps trying to calm panicked Tejo. At hospital Fateh tells Jasmine that if Amrik’s child’s life can get saved by his and her marriage, then he is ready to marry her. With her face already turned to the other side, Jasmine smiles in victory. In Barnala, the caretaker calms Tejo to some extent. At the hospital, Fateh tells Jasmine that he is ready to marry her and take Amrik’s child’s responsibility. Jasmine tells Fateh that it’s not about 2-4 days but a decision about lifetime. She also tells Fateh that she can tolerate her pain but won’t be able to live if he leaves her child in between.

Jasmine asks Fateh to make a decision by thinking wisely, not by getting forced by situation or other people’s pressure. Fateh tells Jasmine that his decision is final and he will do anything and everything for Amrik’s child. Jasmine hugs Fateh and smiles evilly. Fateh feels helpless. In the next episode, Jasmine will get worried when Fateh will say that they will have to reveal Tanya’s real identity to their families before their wedding. On the other hand, Tanya will be shocked to see Tejo alive in Barnala. She will get confirmed that Heer is Tejo as she will hear Tejo screaming Fateh’s name in panic.