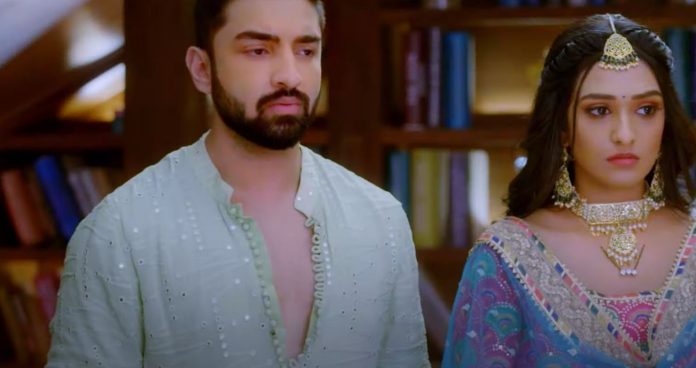 Bhagya Lakshmi 17th June 2022 Written Update Lakshmi accused Rishi asks Lakshmi to answer. She asks him if he wants to know the truth. He replies with a yes. She tells that she can’t tell him the truth. Rishi tells Malishka that the baby isn’t of him, he never had any relation with Lakshmi. Malishka is stunned to know about Lakshmi’s lie. She goes to the family and reveals the truth that Lakshmi is lying, the baby isn’t of Rishi. She asks Lakshmi to answer them, who has fathered her baby, to whom does the illegitimate child belong. Karishma asks about the baby’s father too. Everyone wants an answer from Lakshmi, who is totally caught up by their questions. Malishka accuses Lakshmi for naming someone’s sin as Rishi’s child. Will Lakshmi’s lie bring more problems for her? Keep reading.

Earlier in the show, Lakshmi collides with Malishka. Malishka insults her once again. She asks why did she get pregnant when she was getting divorced in two months. She questions the motive, if she got pregnant to get the property from Oberois. She tells that nobody can accept her, after all she has done a disgusting thing to separate Rishi and her. Lakshmi calls it enough. Rishi finds Lakshmi warning Malishka. Ahana asks Lakshmi to help her. Malishka asks Rishi to go and talk to Lakshmi if he wants. He asks her to listen to him. He asks her if she can fix the kurta button. She tells that she will not let him use her further, she will find a new life partner for her. Ayush tells Rishi that Malishka has a reason to get angry on him. Rishi asks hom to take his side. Lakshmi wishes Ahana to get lots of happiness and love. Ayush taunts Lakshmi that she doesn’t have a pure heart. He asks Ahana to maintain distance from Lakshmi.

Ayush humiliates Lakshmi, who has ruined their faith. Ahana asks him to stop it. She doesn’t want to hear a word against her. He applauds Lakshmi for using her magic on Ahana. He tells that he had threatened Malishka because of Lakshmi, but now he doesn’t trust Lakshmi now. Lakshmi asks him if he really did this. He tells that Lakshmi proved her wrong. Ahana asks him not to misbehave, he has no idea how much Lakshmi helped her. Neelam and Sonia come there to meet Ahana. Lakshmi asks Neelam how is her foot now. Neelam tells that she has come to talk to Ahana. She tells Ahana that she is better now, she will always protect the family. She blesses Ahana. She tells that Sonia and Ahana are equal for her.

Ayush doesn’t want to talk to Lakshmi. Lakshmi doesn’t lose heart. She wants to look after Neelam. Neelam meets Gautam and his family. She tells them that she is okay now. Lakshmi gets a chair for Neelam. Neelam sits to keep calm in front of the guests. Malishka leaves in anger. Kiran finds Rishi going after her. Karishma asks Sonia if Neelam doesn’t know about Lakshmi’s pregnancy. Sonia tells that Neelam has no idea about it. Ayush goes to call Virender. Malishka talks to some guy, but Rishi stops her. Rishi tells that she doesn’t need to do such things. She asks him by what right is he saying this.

He asks Kiran to talk to Malishka. Kiran tells that she has seen his act as well, he has no right to stop Malishka. She doesn’t want to help him this time. Gautam likes the decorations a lot. He tells that Lakshmi is the best in everything. Rishi is fed up hearing her praise. Gautam calls for a rocking celebration. He tells that he will be performing with Ahana on a folk song. The family applauds Gautam and Ahana. Rishi, Malishka and Lakshmi also join the couple. Rishi wants an answer from Lakshmi. Her silence troubles him. Virender asks Dadi to sit with Neelam.

Neelam asks pandit to start the roka rituals. Virender wants Neelam to perform the rituals. After the Roka rituals complete, the family elders congratulate Gautam and Ahana. Gautam tells that the roka has happened pretty soon. He proposes Ahana with a ring. Ahana gets excited. She accepts his proposal. He makes her wear the beautiful ring. They hug happily. Karishma blesses them. Gautam’s mum invites Ahana home to see if she wants to make any changes in the house. The family finds Gautam madly in love with Ahana. Neelam permits Ahana to go with Gautam’s family.

Rishi asks Malishka to listen to him once. She blames him for impregnating Lakshmi. He asks her not to accuse him. She calls him brave to lie. She asks him how can he lie. He tells that its not his baby, he had no relation with Lakshmi till now. He asks her to believe him. She asks him to swear on her. He swears that he didn’t even touch Lakshmi till now. She goes to tell the truth to everyone. He calls Lakshmi. She asks Lakshmi about the big lie of her pregnancy. Neelam and Virender ask the matter. Malishka tells that Lakshmi has cheated the entire family, they will be shocked knowing her misdeed.

She calls it unbelievable. She keeps the suspense high. Everyone asks her to just speak out. Neelam asks her what is it about. Malishka tells that they were accusing Rishi after Lakshmi’s pregnancy reports came. Neelam is shocked to know this. Virender asks Malishka why is she telling this to Neelam. Malishka tells them that the truth is something else. Neelam is confident that her son is innocent, the baby isn’t of Rishi. Malishka tells that Neelam can never be wrong about Rishi. She clears that Lakshmi is pregnant, but its not Rishi’s child, Rishi and Lakshmi had no such relation. Karishma and Malishka question Lakshmi about the baby’s father. Rishi tells that it can’t be his baby.

Malishka asks Lakshmi about her illegitimate child. She humiliates Lakshmi. Sonia asks Lakshmi how can she carry someone’s child and blame Rishi. Ayush also finds this disgusting. Karishma asks the family to see Lakshmi’s real face. Neelam asks Lakshmi to at least have some shame and not ruin their respect. Karishma tells that Lakshmi is low-grade and shameless. The entire family gets against Lakshmi. Lakshmi stands quiet while everyone gets against her.

Reviewed Rating for Bhagya Lakshmi 17th June 2022 Written Update Lakshmi accused: 4/5 This rating is solely based on the opinion of the writer. You may post your own take on the show in the comment section below.