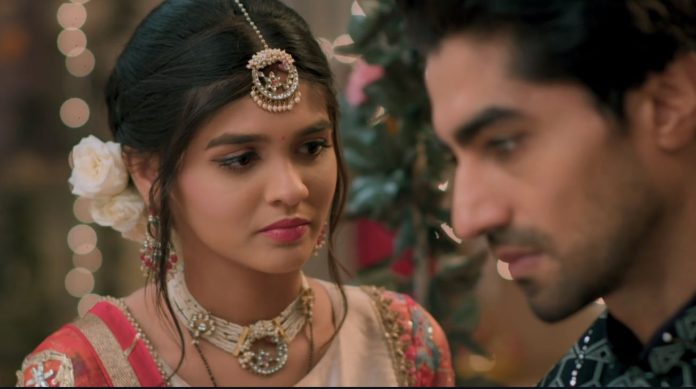 Yeh Rishta 22nd June 2022 Written Update Tensed ties Abhimanyu tells Manish that Akshara is taunting him for arriving late, even after knowing that he remains so busy at work. Everyone relaxes a bit. Manish and Swarna tells Abhimanyu that he scared everyone badly. Abhimanyu says Akshara is taunting him for real. They sit on the swing on Swarna’s instructions. In a low voice, Akshara thanks Abhimanyu. Abhimanyu thinks that it’s not easy for him as well. He also thinks that he doesn’t want to ruin anyone’s mood. Swarna performs Abhira’s veneration as per Sawan Milni rituals.

Suddenly Abhimanyu and Akshara fall off the swing. This shocks everyone. Both Abhimanyu and Akshara get worried for each other. They come into reality and tell each other that they are fine. Everyone starts laughing. Swarna tells Akshara and Abhimanyu that now in real sense, evil sight got warded off from them. Abhimanyu stands up and makes Akshara stand by giving his hand to her. On the other hand, Anand receives Harsh’s call and tells him that it’s the 12th time he called him up asking about hospital work. Anand disconnects the call asking Harsh to let him work.

Angry and irritated, Harsh is seen getting angry at staff and making them clean the couch properly. Staff stands stunned. At Goenka house, everyone asks Akshara and Abhimanyu to quickly clean up the glitter stick on their bodies. Swarna says now they will enjoy a lot as happiness has increased with Abhimanyu’s arrival. Abhimanyu gives an angry glare to Akshara. Akshara pretends to be happy and smiling. Abhira leaves to get cleaned up. Aarohi and Neil are standing alone somewhere in Goenka house. Aarohi asks Neil if he felt good after coming to Goenka house. She also asks Neil if his mind diverted a little.

Neil tells Aarohi that if he is sharing everything with her doesn’t mean that she could say anything. Aarohi tells Neil that jealousy issues arise between the step siblings most of the time. She also tells Neil that she hopes the same thing doesn’t arise in his case. Aarohi leaves telling Neil that a person can’t predict what will happen with him/her in future. She turns and smirks, noticing that Neil is getting affected and manipulated by her words. On the other hand, Akshara and Abhimanyu are seen trying to remove glitters from their own bodies. Akshara and Abhimanyu try to brush away the glitter from each other’s bodies and clothes.

Aarohi notices that there is some tension going on between Abhimanyu and Akshara. She gets interested in knowing what tension is going on in between the star dust fairy tale of Abhira. On the other hand, Manjiri tells Akshara that her maternal family is very nice and not even for a moment let her feel disrespected or humiliated. Akshara tells Manjiri that respect for her has increased in Goenkas eyes. Manjiri thanks Akshara for understanding her and for giving her advice and suggestions. She apologizes to Akshara for her past ill behavior with her. Manjiri tells Akshara that she felt and noticed the misunderstandings, differences and distance growing between her and Abhimanyu.

She tells Akshara that her and Harsh’s relation is the reason behind differences between her and Abhimanyu’s relationship. Manjiri requests Akshara to handle, take care of her and Abhimanyu’s relationship and keep it safe. Manji tells Akshara that she is at fault as she hurt her and Abhimanyu a lot. Akshara tells Manjiri that she has gone through a very difficult situation and did nothing wrong. She also tells Manjiri that she didn’t feel even a little bad about any of her bitter words. She wipes Manjiri’s tears and asks her to enjoy the function. Manjiri gives a handkerchief to Akshara with “Sorry” knitted on it.

Manish introduces/announces the bangle game of bangles and couples. Vansh and Neil ask what about single people. Mahima says even she and Manjiri are single for today. Parth says they should get Vansh married this year to make him eligible for couple games for next year. Vansh says Parth is saying the right thing. Aarohi asks Akshara shouldn’t they get even Kairav married now. Everyone, especially Kairav gets awkward. Akhilesh changes the topic and starts counting the couple participants for the game. Aarohi smirks, noticing the tension between Abhira. As every couple gets teamed, Kairav chooses Manjiri as his partner or teammate for the game, Vansh choses Mahima and Neil convinces Aarohi to be his partner.

All teams and players sit at their designated places. Akhilesh explains the rules of the game to everyone. Neil and Aarohi have some nok-jhoks between each other. Kairav and Manjiri have some mature and mother-son conversations with each other. On the other hand, Abhimanyu taunts Akshara for excellently pretending/acting to be happy. He says he doesn’t like playing games with his family. Akshara explains to Abhimanyu that they are playing for their families, not playing with their families. She says there is a big difference in both. Akshara asks Abhimanyu to not spoil the game mood by keeping an angry face as they have to win.

Abhimanyu asks why. Akshara explains to Abhimanyu that their families think they are made for each other. She explains to Abhimanyu that their families will get hurt with their defeat and after knowing about their differences. Akshara requests Abhimanyu to atleast play like a team if not a couple. Abhimanyu gets angry and asks Akshara to get ready to witness his competitive side. Akshara gets tense hearing this. In the next episode, Manish-Swarna, Aarohi-Neil, Abhimanyu-Akshara, Kairav-Manjiri, Shefali-Parth and Vansh-Mahima will be seen sitting together as teams. “Bole Chudiyan” will start playing. Abhimanyu will make Akshara wear bangles angrily. This will hurt/injure Akshara but she won’t let Abhimanyu or anyone else realize it. Later, Abhimanyu will see Akshara’s arm bleeding because of the broken bangle.

Reviewed Rating for Yeh Rishta 22nd June 2022 Written Update Tensed ties: 2/5 This rating is solely based on the opinion of the writer. You may post your own take on the show in the comment section below.