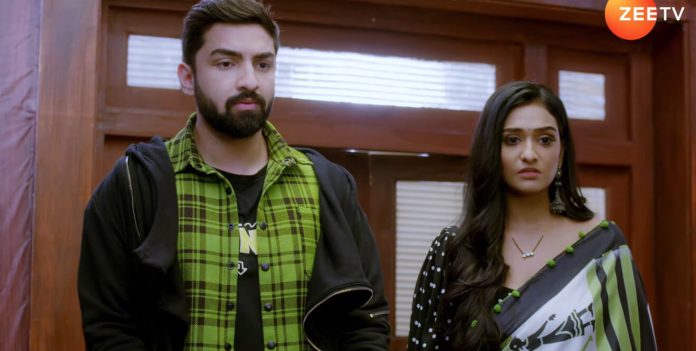 Bhagya Lakshmi 28th June 2022 Written Update Divorced Lakshmi tells Rishi that she has accepted him forever, for every birth. She confesses her feelings to Rishi. Ahana is deeply influenced by Lakshmi. She tells Neelam that she wants to make a new start with simplicity, not grandeur and showoff. She praises Lakshmi. Malishka asks Ahana is she saying this about Lakshmi, who is a fake girl. Ahana takes a stand for Lakshmi and silents Malishka by asking her who is she to voice such an opinion. She doesn’t want to listen to Malishka. Ahana rushes to puke. Karishma grows worried for Ahana, and asks her the reason for the sudden vomiting. Rishi and Lakshmi finally reach the court and meet the judge.

Judge tells them the final decision, that they are now divorced, their relation was just till now. She stamps the divorce papers, leaving Rishi and Lakshmi shocked and in tears. Ahana reaches there in the last second. She stops the divorce and tells the truth of her pregnancy. She tells Rishi that Lakshmi isn’t pregnant. She adds that she is pregnant, and Lakshmi was just covering up for the sake of her alliance. Rishi is shocked by this truth. Lakshmi asks Ahana why did she come. Ahana tells that she can’t break Lakshmi’s relation to make her own relation. Rishi realizes Lakshmi’s truth. Ahana returns Lakshmi’s lost respect. What will Rishi decide now?

Earlier in the show, Neelam calls Gautam’s mom and asks her to come soon. Gautam’s parents are ready to meet Ahana. Gautam’s mom tells that Gautam isn’t ready till now. Neelam asks them to come soon. Gautam isn’t ready yet. He meets his parents with a tensed face. They realize something is wrong and ask him the matter. Gautam scares them by his silence. He then tells that he has to tell them something. The aarti plate falls down. His mom calls it a bad omen. Gautam gets worried for Lakshmi. Rishi tells that Lakshmi doesn’t matter to him. She asks him to look into her eyes and say that he doesn’t worry for her. He repeats his words. She doesn’t want to believe him. He meets her eyes and repeats it one more time. She wants him to not lie and just say the truth.

Rishi tells Lakshmi that he never cared for her. She sees him walking in the middle of the road. She shouts on seeing a car speeding towards him. She runs and saves Rishi. She scolds him for being so careless. He asks her why does she care. She tells that she cares for him, because she regards him her husband for every birth. Rishi goes away. Neelam and Ayush compliment Malishka. Malishka tells that Lakshmi is so cunning to come up with such tricks. Ayush tells that Malishka is the best, Lakshmi has no match with her. She thanks Ayush. Neelam tells that she will call Rishi and get the good news that Lakshmi is leaving from his wife. He wants their divorce news.

Dadi tells that she just wants to dance. Ayush pulls her leg. They look for Ahana, who comes downstairs, wearing a traditional saree. Neelam compliments Ahana. Karishma asks Ahana is she wearing Lakshmi’s saree. Malishka and Neelam question Ahana about her dressing sense. Ahana tells that she is making a new start, she wants simplicity, she wants to follow Lakshmi who is so real. Malishka tells that Lakshmi is full of pretence. She doesn’t think Lakshmi deserves them. Ahana asks her to stop it. She tells that she respects Malishka, but she regards Lakshmi as her Bhabhi. She doesn’t want to hear any word against Lakshmi. She asks Malishka who is she, she isn’t a family member.

Ayush and Karishma stop Ahana from hurting Malishka’s heart. Karishma tells that Lakshmi isn’t deserving of this family and their love, she is a stain on their respect. Ahana wishes to tell them that Lakshmi has saved their respect. Malishka gets upset and leaves. Karishma asks Ahana why is she thinking good about Lakshmi. Dadi supports Ahana. She tells that Ahana wants to start her life without any pretence, it’s a good thing. She asks Ahana not to follow Lakshmi in her relations. Neelam tells that Lakshmi won’t be forgiven for her sins.

Neelam tells that Lakshmi’s real face and real character got known to everyone, now Rishi and Lakshmi’s relation is over. Ahana gets worried. She asks Karishma to give her phone. The family finds Ahana so tempered. Neelam tells that Ahana is getting angry because of Lakshmi’s divorce. She feels Lakshmi has brainwashed Ahana, Lakshmi can cheat anyone. Virender doesn’t think Ahana will blindly follow Lakshmi. Ayush can’t digest Ahana’s behavior. Karishma tells that she doesn’t know what’s going on. Ahana calls Lakshmi. She tells that she will just call in two mins after reaching her room.

Lakshmi wishes the truth comes out in front of everyone. Rishi thinks he doesn’t know why he lied to Lakshmi, he feels glad when Lakshmi held his hand, he feels love for her. He recalls their sweet moments. He doesn’t want to forget what she did with him. He thinks if Lakshmi has forgotten everything. He wanted to think good about her if she didn’t play this game. Lakshmi is silent because of Ahana. She prays that the truth comes out and the relation gets saved. She doesn’t want to lose Rishi. She thinks she can’t see Ahana in pain. She prays that Gautam’s family accepts Ahana happily. Rishi and Lakshmi see each other. Lakshmi knows Rishi wants to say sorry for the lie that she doesn’t mean anything to him.

He tells that he forgot the file in the car. He goes to get it. Ahana fails to call Lakshmi. She calls Rishi and thinks to tell him the truth. She remembers Lakshmi’s words. She doesn’t want Lakshmi’s sacrifice to go in vain. Karishma asks Ahana what happened to her, is the matter concerning Gautam. She tells that they will call off the engagement if Ahana doesn’t like Gautam. Ahana tells that Gautam is a really nice guy. Karishma asks her what’s bothering her. She tells that Gautam and his parents are really good people. She asks Ahana not to worry. Ahana runs to the washroom to puke.

Karishma asks her is she okay. She checks Ahana’s phone and wonders why is Ahana calling Lakshmi. She asks Ahana not to take Lakshmi’s name. She wants to know what’s wrong, why is Ahana vomiting. Ahana lies that she had much of the junk food. Sonia comes to call Ahana. She tells that Gautam’s family has come. Ahana wishes that Gautam told everything to his parents and they accepted her with the truth. Gautam and his family meet Oberois. Dadi tells that she will give a dance performance now. Dadi boasts of her good health. Neelam asks the guests to have food. Gautam’s parents miss the food prepared by Lakshmi. They question about Lakshmi. Virender tells that Rishi and Lakshmi have gone for some important work.

Karishma tells that Ahana is nervous since morning, she will just come. Gautam’s parents tell that Ahana will have the same life after marriage. They feel even Gautam is looking tensed since a few days. Ahana meets them. She wants to know from Gautam if he told the truth to his parents. Gautam’s parents praise Ahana’s simple look which reminds them of Lakshmi. Rishi and Lakshmi meet the judge. The judge asks them if they had a talk. Rishi tells that Lakshmi has nothing to say. Judge tells that there is no scope left for them. She gets ready to tell the decision.

Reviewed Rating for Bhagya Lakshmi 28th June 2022 Written Update Divorced: 5/5 This rating is solely based on the opinion of the writer. You may post your own take on the show in the comment section below.