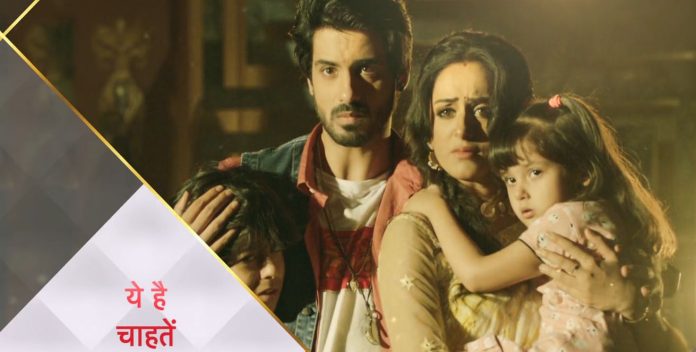 Yeh Hai Chahatein 2nd July 2022 Written Update Saaransh finds Ruhi crying inside the room. He asks Ruhi why she is crying. Ruhi tells Saaransh that she is crying because Prisha didn’t recognise them even when he was with her at the party. Saaransh explains to Ruhi that maybe Prisha is testing them. He tells Ruhi that maybe Prisha doesn’t want them to tell Rudra about her being in Delhi as she might still be angry with Rudra. Ruhi and Saaransh decide to meet Prisha by waiting for her outside the hotel, even if it may take the whole day. Saaransh tells Ruhi that after meeting Prisha, they will convince Prisha to return home with them.

Ruhi and Saaransh hope to meet Prisha and get her back home soon. On the other hand, Pihu goes to see Prisha’s condition. Armaan tells Pihu that Prisha is fine now and is sleeping. Pihu asks Armaan if Prisha saw Rudra at the party, which is why he ran away with Prisha from there. Armaan tells Pihu that he couldn’t have stayed at Party with Prisha, where Rudra was present. He tells Pihu that according to Rudra’s history, Rudra can do anything to get Prisha back and torture her. He lies to Pihu that he can’t see anything wrong happening with Prisha, which is why he brought Prisha home from the party.

Armaan tells Pihu that this is why he didn’t wish to come to Delhi with Prisha. He also tells Pihu that Rudra has many powerful contacts in Delhi, which is why he never wanted to return to Delhi. Armaan makes Pihu feel guilty using his lies. Pihu believes Armaan’s lies and promises Armaan that she will soon send Prisha to Mumbai with him as soon as possible. Armaan thanks Pihu. He thinks that meeting Rudra helped him a lot. Evil Armaan further thinks to take Prisha away from Rudra and Delhi once again. Next morning, Prisha and Thakurs leave the Cupola hotel for their new home in Delhi.

Armaan secretly gives money to the hotel receptionist and asks her to not let anyone know where he and his family went. Receptionist agrees and takes money from Armaan. As Armaan and his family’s car leaves from Hotel Cupola, Ruhi and Saaransh arrive there. They start waiting for Prisha to come outside of the hotel. On the other hand, while getting ready, Rudra sees his and Prisha’s photograph. He recalls his past happy and romantic moments that he spent with Prisha. Rudra also recalls Prisha teaching him how to stitch clothes and buttons. Flashback ends.

Vanshika comes there. She asks Rudra to quickly get ready as they need to go to sign a contract at Mr. Oberoi’s place. Rudra sends Vanshika outside and starts stitching the button of his shirt. He gets ready and tries calling Anil. When Anil still doesn’t pick up his calls, Rudra wonders where Anil disappeared suddenly in one night. Rudra leaves his room, as Vanshika calls him outside. On the other hand, Thakur’s and Prisha reach Thakur’s new home. Pihu tells everyone that she liked the house very much. Pihu leaves for her college. Armaan and Digivijay leave for their official meeting.

After informing Kanchan, Prisha leaves to buy some shirts for Armaan. On the other hand, The guard of the Cupola hotel sees that Ruhi and Saransh have been standing outside the hotel for a long time. Saaransh asks Ruhi to stop crying. He asks Ruhi to believe him that Prisha will surely come outside. Guard notices that Ruhi and Saaransh are upset and waiting for someone. On the other hand, Pihu, Vidyut and Raj’s college announces Romeo-Juliet play. Announcer asks interested students to come to the auditorium for auditions after lectures.

Vanshika sends Rudra to shop for himself on his own. Rudra decides to choose shirts for him, recalling Prisha’s taste. Rudra and Prisha walk and shop near each other only but fail to see each other. “Teri yaad sath hai” plays in the background. The salesman tells Prisha that she has an excellent choice/taste. He asks Prisha to check out their female new collection too as he is sure that she will like that too. Prisha says sure. Rudra doesn’t find anything good for himself. Prisha and Vanshika also fail to see each other even when they shop near each other in the female section.

Vanshika goes to the trial room, to check out and try out some clothes. Prisha passes from behind Rudra and asks the store owner to pack the shirts she selected for her husband. She leaves towards the trial room to try out an outfit for herself. At college, auditions for Juliet’s role starts. When Pihu starts giving the audition, Raj and Vidyut keep staring at her in awe. Everyone claps as Pihu ends her audition performance. Professor says now Romeo’s auditions are going to start. Vidyut comes on stage and confidently says that only he will become Romeo. He starts giving the audition. Everyone claps for Vidyut as he completes the audition.

Professor asks Vidyut to sing a song written in the script. This shocks Vidyut. Professor says singing is necessary as it’s a musical play. Everyone laughs as soon as Vidyut starts singing. Pihu shows Vidyut a loser sign, which makes him feel more angrier. At the RR store, Rudra finds some shirts kept at the billing counter. He asks the store owner why he hasn’t kept such amazing shirts on display. He feels that amazing shirts are chosen by Prisha.

In the next episode, Rudra will throw a dupatta in Prisha’s trial room. Prisha will walk behind Rudra to thank him. Ruhi and Saaransh on the other hand will get tired waiting for Prisha outside the hotel. Guard will ask disheartened Ruhi and Saaransh, whom they have been waiting for since morning. At the RR store, Prisha will get to know that the store owner by mistake took Rudra to be her husband and sold the shirts to him. She will run behind Rudra to stop him and get shocked.