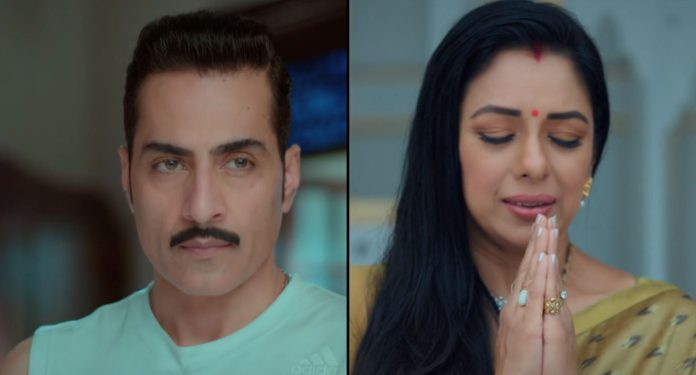 Anupama 4th July 2022 Written Update Vanraj Anupama clash Anuj, Anupama and Barkha start dancing on the song, “Didi Tera Devar Deewana”. Everyone enjoys the song and dance performance. Others also start doing the song steps. Mamaji starts dancing and troubling Rakhi. In between the song, Anuj and Anupama play dog in the pond. Anuj intentionally makes Anupama win the game. One by one everyone joins the dance. Pakhi and Adhik dance together, near each other. Seeing everyone busy, Adhik takes Pakhi to Vanraj-Kavya’s room. Anupama gets worried seeing Pakhi and Adhik missing from the function.

Adhik apologizes to Pakhi for bringing her away from her family secretly. Pakhi and Adhik tell each other that they wished to tell each other something for a long time. Anupama excuses herself and goes to find Adhik and Pakhi. Adhik first goes close towards Pakhi but steps back. Pakhi moves towards Adhik. Anupama finds Pakhi and Adhik holding each other’s hands and moving closer to each other. She gets shocked and worried. Before Anupama could stop them, Vanraj comes there and asks Adhik how dare he. He grabs Adhik’s collar and asks him how dare he get closer to Pakhi.

Pakhi and Anupama try to make Vanraj leave Adhik. Vanraj reminds Anupama that he asked her to keep Shahs and Kapadias away from each other. He blames Anupama for letting Adhik and Pakhi get closer. Vanraj takes Adhik outside by grabbing his collar. Worried Anupama and Pakhi run behind Adhik and Vanraj. Adhik, Vanraj, Pakhi and Anupama’s voice grabs everyone’s attention. Vanraj slaps Adhik hard in front of everyone. Adhika falls on Anuj’s shoulder. This shocks everyone. Angry Anuj asks Vanraj, what is all this? Barkha asks Vanraj why he did/how dare he slap Adhik. Vanraj asks Barkha to ask her brother about it.

Angry Ankush asks Vanraj what happened that made him slap Adhik. Vanraj asks Adhik to tell his sister why he slapped him. Barkha says it doesn’t matter what happened. She asks Vanraj how dare he touch her brother. Vanraj asks Barkha how dare her brother touch his daughter. This shocks everyone. Vanraj says Shahs and Kapadias family relations stopped him from thrashing Adhik badly. Vanraj asks Anupama how dare her relative take Pakhi to his room and try to get closer to her. This shocks everyone. Anupama asks Vanraj to calm down. Hearing Vanraj’s screaming, Kavya runs inside the house.

Shocked, Kavya asks what happened. Bapuji asks Vanraj the same question. Vanraj tells Bapuji that he thought of surprising everyone. He says when he went towards his room to change his clothes, he found Adhik getting closer to Pakhi. Barkha defends Adhik. Baa defends Vanraj. Anuj asks Anupama to tell what happened. Vanraj tells everyone that he found Adhik getting closer to Pakhi in his room. Everyone gets shocked hearing this. Paritosh says he failed to understand that Adhik tried to get closer to Pakhi in the music fest too. Samar tells Paritosh that the music fest situation was different. Paritosh says for sure Adhik would have bribed the goon to harass Pakhi, so that he could act to save her and become a hero in her eyes.

This information shocks everyone. Samar requests Paritosh to first try understanding what is happening at present. Anupama and Kavya shuts Rakhi from putting fuel in the fire. Rakhi agrees to stay quiet for sometime. Anuj tells Anupama that he will trust only her words. He requests Anupama to tell everyone what she saw. As Anupama fails to say anything, Vanraj taunts Anuj. Ankush asks Adhik and Anuj asks Pakhi to tell everyone whatever happened. Vanraj asks Anuj if he wants Pakhi to tell how Adhik harassed her in a locked room. Anuj tells Vanraj that he is taking Anupama’s swear that he won’t spare Adhik, if Adhik will be proved wrong.

He says they have to first know what happened in between Pakhi and Adhik. Vanraj angrily says Adhik is surely wrong as he is saying this. Rakhi enjoys the family drama. Anuj asks Adhik to tell him what actually happened. Adhik says it was very noisy in the hall, so he and Pakhi went to just talk to each other. Vanraj says Adhik is lying. Before Vanraj could attack Adhik, everyone stops him. Baa asks Adhik what he wanted to talk to Pakhi in alone. She tells Adhik that Pakhi isn’t even his friend. Adhik says he and Pakhi are friends. This angers Vanraj. Everyone again stops Vanraj from attacking Adhik.

Ankush and Barkha argue with Vanraj angrily. Anuj asks Vanraj to let the truth come in front of everyone before accusing anyone of anything. Baa asks Anupama to see the consequences of trying to bring Shahs and Kapadias closer. Bapuji stops Baa and asks Vanraj to let the children speak. Kavya asks Adhik to honestly tell whatever happened. Adhik says he can’t understand why everyone is panicking. He says he and Pakhi are just friends and went to talk to each other separately because of function noises. Adhik says he never knew that if two people will just talk to each other, this will lead to such a big issue.

He tells everyone that Vanraj misunderstood him and slapped him in front of everyone. Vanraj shouts saying that Adhik is lying. Baa and Rakhi ask Adhik what type of conversation is done inside a locked room. Vanraj shouts and says that Adhik was trying to mislead his daughter. Adhik tells Vanraj that Pakhi isn’t a kid, whom he will mislead by giving a chocolate. Vanraj asks everyone to see Adhik’s attitude and how he is arguing with him, eye to eye. He asks someone to shut Adhik, otherwise he will beat Adhik black and blue. Ankush asks Vanraj if he would sit here quietly. Both Vanraj and Ankush get into a bitter argument.

Anupama tries to calm down Ankush and Vanraj. Pakhi shouts and says that she went with Adhik on her own will/wish. This shocks everyone except Rakhi. Pakhi repeats her words. Angry Paritosh tries to shut Pakhi. Anupama asks Paritosh to get silent for a minute. Vanraj says Paritosh is right as Pakhi doesn’t know what is right and wrong. He says Pakhi doesn’t even know what should be said and what should not be said. Vanraj asks Pakhi to shut up. Pakhi repeatedly screams to stop it. This shocks everyone. Pakhi asks why can’t anyone understand that a girl and boy can just be friends too. Baa says girl and boy’s friendship isn’t possible. Pakhi says she and Adhik are friends just like Kavya and Vanraj were. This shocks everyone.

In the next episode, Anupama will ask Pakhi and Adhik to let both families think about what they said. Vanraj will say that there is nothing to think about. He will say that Adhik won’t be seen near Pakhi from now onwards. Pakhi will tell Vanraj that he can’t control her life. This will shock everyone.

Reviewed Rating for Anupama 4th July 2022 Written Update Vanraj Anupama clash: 5/5 This rating is solely based on the opinion of the writer. You may post your own take on the show in the comment section below.