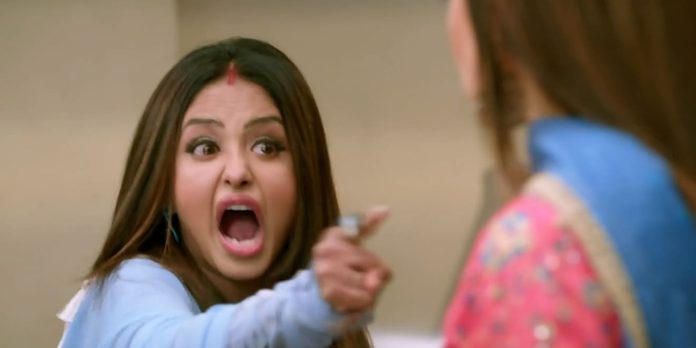 Kumkum Bhagya Rhea insults Aaliya 6th July 2022 Kumkum Bhagya – Rhea insults Aaliyah Pallavi says that maybe she was wrong in judging Prachi and she may not be that bad she considered her to be. Rhea listens to this and gets shocked. She blames Aaliyah and calls her pathetic. She asks Rhea to control herself. Rhea asks Aaliyah to control herself and says that she is an absolute failure. Aaliyah is stunned.

Meet episode spoiler – Mr. Meet catches Manjiri:
Manjiri meets Harshvardhan and he says that he likes her the way she was before. He starts coughing and Mr. Meet goes to give him water. Manjiri speaks like Mrs. Meet. Everyone are shocked. Mr. Meet realizes that Mrs. Meet used Manjiri’s name to hide her betrayal. He says that she is Mrs. Meet only. Manjiri is shocked.

Girish and Abhisekh demand for their share of properties. Aabha says that if injustice is done to them then they will go to the court. Hari Mohan is shocked. Siddharth breaks a glass bowl in anger and a broken piece pricks him. Mithai calms Siddharth and makes him understand. Siddharth takes the property papers and tears it into pieces. He throws it in the air leaving everyone stunned.

Sukhwinder cries and Parineet asks her if she is worried about the predication done by her friend. She assures her that nothing wrong will happen in Neetii’s wedding. Sukhwinder says that she is not able to understand anything as Rajeev didn’t wanted to marry Neetii. Monty and Rajeev threaten a man who kidnapped a girl along with a woman. Parineet sees Rajeev.

Sakshi asks Manav if he is going to propose any girl. He says yes and that girl is here only. She asks where and he tells her to see in his eyes. Manav wears his shades. Sakshi is shocked to see Niharika.