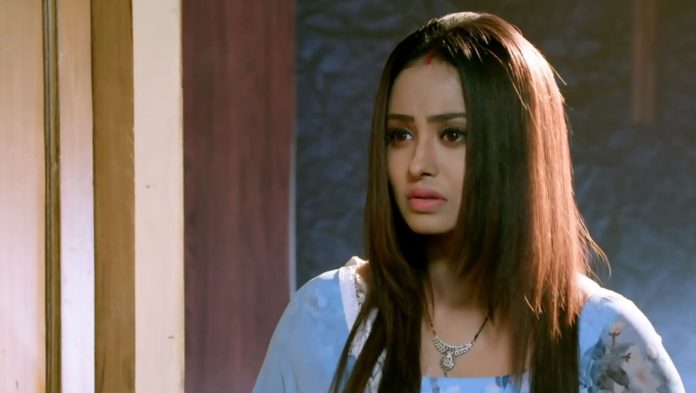 Kumkum Bhagya 6th July 2022 Written Update Rhea’s outburst Dida makes Pallavi realize that Prachi isn’t a wrong person, there is more than what meets the eye. She doesn’t like Pallavi just pampering Rhea, when Prachi is also pregnant and needs the same love and affection from the family. Pallavi goes pondering. She tells Vikram that she didn’t think of this before, maybe Prachi isn’t so bad as she assumes. Vikram is surprised to hear this. At the same instant, Rhea comes to meet Pallavi. She overhears Pallavi’s changed opinion about Prachi. She gets too raged, and goes to Aaliya. She finds Aaliya. She vents her anger on Aaliya. Aaliya asks Rhea to calm down. Rhea replies that Aaliya is pathetic. Aaliya asks her to mind her tongue. Rhea tells that its all Aaliya’s fault, she is an absolute failure. Aaliya asks to control her anger. Rhea refuses. She has a violent outburst of her anger and hatred. what will Rhea do in her madness? Keep reading.

Later, Pallavi asks the maid to just take care of Rhea. Pallavi asks Dida to choose a designer saree for herself. She shares her happiness. She tells that the family members always wish her, but this year Rhea wished her first. Dida asks is she happy that Rhea has wished her two days ago. Pallavi likes her efforts. Dida mocks her. Pallavi hopes that Rhea does something special and big for her. Dadi wants Pallavi to think good about Prachi as well. Prachi tells Shahana that she is handling the decorations. Dida asks Pallavi to see Prachi’s genuine goodness.

Aaliya asks her to relax, sometimes one has to favor the employee for work purpose. She pacifies Rhea. She asks her to achieve the goals by using her pregnancy. She suggests that Rhea gets Ranbir’s attentions. Ranbir finds Prachi busy in the preparations. Stanley asks Ranbir to keep Shahana away from Prachi. Ranbir tells that Shahana is close to Prachi and also him. He praises Shahana and also Stanley. Shahana tells that Ranbir befriends strange people. Rhea gets upset seeing Prachi in the house. Prachi refuses to take Ranbir’s help. Ranbir tells that she doesn’t want his help because of her ego.

She asks him to help himself. Ranbir tells Stanley that Prachi’s anger is high. Stanley wants to stay away from angry people. Prachi asks Ranbir not to stare at her. Ranbir tells that he feels good when he sees her. She asks him to just do his work and not trouble her. She wants to handle the decorations alone. She gets angry on him. Ranbir gets talking about his love for Prachi. Elsewhere, Vikram asks Pallavi what is she thinking so seriously, is it about Ranbir and Rhea. She answers that she is thinking of Prachi, maybe she isn’t so bad as she thinks. Rhea overhears them. Vikram asks Pallavi what is she saying. Pallavi tells that Prachi knows that she has to leave the house, still Prachi is trying to make her birthday special, Rhea isn’t doing anything, Prachi is working hard selflessly, its strange.

Rhea thinks she isn’t a maid to work for them. Vikram tells that Prachi doesn’t expect anything from them, Prachi is a good person, she could have sent them to jail but she behaves well with them, even on knowing about Rhea’s pregnancy. He tells that Prachi has accepted the family as her own, and fulfilled her duties. Rhea didn’t wish to keep Prachi in the house. She gets angry that everyone is seeing Prachi’s goodness. She tells that Aaliya gives her wrong ideas. Aaliya finds Rhea angered and goes to ask. Vikram is glad that Pallavi has seen Prachi’s goodness. Pallavi tells that she doesn’t want to argue with him, she will always favor Rhea. Rhea vents her anger on Aaliya for misleading her. She advises her to go and guide Prachi.

She tells that Aaliya’s prediction about Prachi is wrong, Prachi isn’t like Pragya, Prachi didn’t go, she is planning to stay back. She regrets that she begged Prachi and made her feel powerful. She tells that Pallavi is getting pleased by Prachi’s efforts. She feels upset that she begged Prachi and lost her esteem. She feels so humiliated like she accepted her defeat. She tells that its all Aaliya’s fault, her idea was wrong. She doesn’t want Aaliya’s advice, because Aaliya is a failure. She tells that she will deal with her problems herself. Aaliya asks her to stay out of it. Rhea tells that she is seeing this day because of Aaliya. Aaliya asks her to shut up else she will see worse days.

Rhea tells that she fell in her own eyes. Aaliya wonders how did her calculations get wrong. She feels someone would have stopped Prachi, maybe Dida has failed her plan. She wants to use Dida in her plan so that Dida asks Prachi to leave the house. Ranbir and Prachi have a moment when they collide and he saves her. He asks her to be careful, he can’t be with her all the time. She tells that he never came to her, because he is with Rhea to take care of her. Ranbir holds her hand. Stanley finds them cute. Prachi asks Ranbir to leave her hand. Ranbir tells that he is tired of explaining himself to everyone, he has his own life. He asks her not to threaten him. He goes for his work. Aaliya loves Rhea who is her only family. She doesn’t want Rhea to talk to her badly and hurt her. She wants to see Rhea happy.

She tells that she has done everything to make Prachi leave, she can’t be wrong, even then her plans backfired, Rhea and her relation is also getting affected. She wants to make such a plan that Dida is left shocked. She doesn’t want Rhea to lose. She calls someone home to celebrate the birthday. Ranbir smiles seeing Prachi. She tells that she doesn’t like his staring. He asks her is it any high court decision. He tells that there is no rule, he can stare at his wife. Stanley tells that looking at wife is called love. Ranbir tells that there is much love between them. Prachi asks him not to look at her. Ranbir is impressed by Stanley’s smartness. Rhea finds Ranbir staring at Prachi with love. She gets upset. Aaliya thinks Prachi isn’t letting Rhea stay in peace.

Reviewed Rating for Kumkum Bhagya 6th July 2022 Written Update Rhea’s outburst: 5/5 This rating is solely based on the opinion of the writer. You may post your own take on the show in the comment section below.