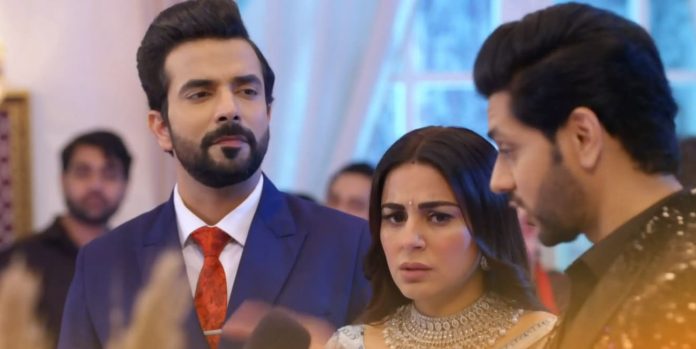 Kundali Bhagya 6th July 2022 Written Update Big secret Karan tells Anjali that the night will not pass, even if the morning will arrive, the night’s colour will not get over even if the sun rises tomorrow. He meets Luthras in the party. He asks them not to go anywhere, because a big secret is going to get revealed at 9.30 PM sharp. He gets revengeful, seeing Rishabh and Preeta happy together. He thinks they love each other and thus killed him. Preeta gets too tensed, seeing Karan’s presence around her strongly. She doesn’t know what secret Arjun is talking about, but seems to get too affected by his announcement. Rishabh is honest and doesn’t think much of Arjun’s warning message. He doesn’t know what feelings Preeta is batting alone.

Earlier in the show, Preeta asks Shrishti to save her from losing her senses. Karan tells that she will lose her senses soon, she will soon meet someone who is heartless, ruthless, cunning by mind and have hatred in heart, he wants revenge, he is the Arjun Suryavanshi.

He doesn’t want Preeta to forget Karan. He promises that. Shrishti takes care of Preeta. She asks Preeta to remove the old memories from her mind. She asks Preeta to have water. Karan tells that he can never forget Preeta’s deceive, and will never let her forget her deeds. Preeta is still tensed. Shrishti asks her to divert her mind by attending Arjun’s party. Preeta refuses to go there. She wants to avoid Arjun. She tells that she doesn’t get good vibes from Arjun. She feels like an illusion, Arjun is not such that he appears, he is concealing his real personality. Shrishti hugs to console Preeta.

Shrishti tells that Preeta is feeling strange, because she is missing Karan a lot. She asks Preeta to take rest, she will get fresh when she wakes up in the morning. Karan tells that the party will bring a storm in Preeta’s life, the night will never end, the morning will never come in her life, nothing will be normal for her. He wants to fulfil his promise. He waits for Rishabh and Preeta to come in the party and then watch their evil secret coming out in front of the world.

Preeta misses Karan and stays thinking about him. Karan is also thinking of her but with different emotions. He thinks she has cheated him for the sake of money, Rishabh was more successful than him, it was her planning seeing his cricket career ending. He tells that he has won over death to defeat her. He wants to enter her life and ruin her. Preeta wants Karan to come in front of her. She cries and asks him to come back. Shrishti finds Sameer planning a date with someone. She gets angered and spies on him. Sameer takes his selfie to send to the girl. He sees Shrishti behind. He tells that it’s a cute picture. He makes an excuse to flee. He tells her that they have to attend Arjun’s party with the family.

He asks her to get ready on time, and keep his clothes ready. She has noticed that he is changing. Karan sees the party arrangements being done. He asks the staff to put red curtains. He orders them to follow the instructions well. He asks Anjali to make sure that there are red curtains and red lights, he wants the red feel on stage. He grows worried. Anjali senses his worries. She feels that he is right to demand revenge. She thinks Arjun will plan something big and now she should worry for Rishabh and Preeta. Preeta gets the blue saree gifted by Karan and thinks of wearing it. She recalls their cute moments.

She keeps the saree back and thinks she doesn’t want to look good by adorning herself, because Karan isn’t with her. Rishabh asks her to wear something different. She tells that she doesn’t want to attend the party. He asks her what is she feeling, she can share if there is any problem. She doesn’t tell him anything. She goes to get ready. He thinks she is hiding some problem. Karan tells that Preeta would be thinking of Arjun and hating him, her hatred is his victory. He gets decked up for the party, and recalls his past moments with Preeta. He feels her love was a cheat. He remembers her words about his clothing style. He doesn’t want to obey her like a lover. He wants to wear his choice.

They fight for the money. She takes the money as fees to save him from the police. She tells that she will use the money to get food for him. He tells that she will buy makeup with the money, but still look the same. Shrishti and Kritika get ready for the party. Kritika tells that everyone is busy, they will finish their work and come for the party. They both call each their jobless and useless. Sameer finds them arguing. Shrishti asks Sameer to teach manners to Kritika. Bani asks what’s happening. Kritika tells that Shrishti is saying nonsense. Kareena asks them not to waste time.

Kareena tells that they are targeting Shrishti, who always speaks nonsense. Kritika teases Sameer about Reena. Shrishti asks him who is Reena. The family is ready to leave for the party. The garland falls off Karan’s photo frame. Karan checks his clothing. He thinks it was his style, which was changed by Preeta, now that Karan Luthra is changed, he must keep this old style. He gets dressed for the occasion.

Reviewed Rating for Kundali Bhagya 6th July 2022 Written Update Big secret: 5/5 This rating is solely based on the opinion of the writer. You may post your own take on the show in the comment section below.