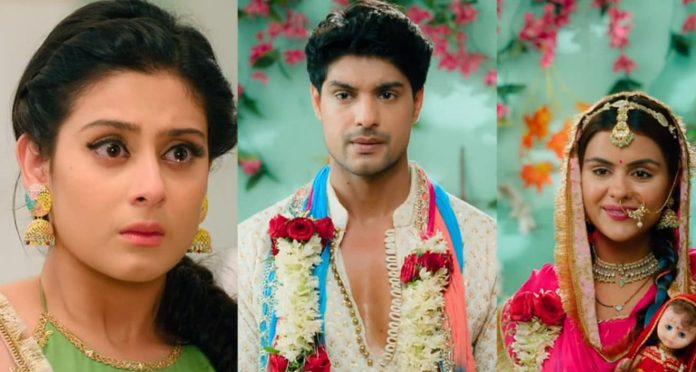 Udaariyaan 12th July 2022 Written Update Fatejo wedding Fateh and Tejo enter the Virk house after announcing that they are married now. This stubs everyone but shocks Jasmine to the core. Gurpreet steps back, when Fateh bends down to take her blessings. She asks what nonsense this is. Gurpreet asks Fateh if mentally unstable Tejo even knows the meaning and importance of marriage. She says marriage is just a doll’s game for mentally unstable Tejo. She grabs Fateh’s collar and asks him if he has considered marriage a fun game that he took such a big step. Innocent Tejo gets scared and hides behind Fateh.

Fateh tells Gurpreet that it’s not a fun game as he for real, married Tejo following all rituals. He says now Tejo is wife and no one can deny/falsify his and Tejo’s marriage. Gurpreet refuses to accept Fateh and Tejo’s marriage. Fateh reminds Gurpreet that she earlier asked him by which right, he will take Tejo’s responsibility. Flashback ends and Fateh says that he will take Tejo’s responsibility by being her husband. Fateh says now no one should have any objection with him for taking care of Tejo. Gurpreet gets angry and asks someone to make Fateh understand.

Fateh tells Gurpreet that a relationship made with love and stamped with marriage can’t ever be broken. He says that Tejo’s love is enough for him. Fateh tells everyone that Tejo might not be mature by brain at present but she considers him, her everything. Jasmine tries controlling her anger while Gurpreet feels shocked and angry by Fateh’s defense for his and Tejo’s marriage. Rupy asks Fateh why married his daughter without his and both families permission. He explains to Fateh that a marriage has some social norms to be followed as two families get related by this. Fateh tells Rupy that he respects social norms, which is why he married Tejo to take her responsibility, otherwise he never required any relation to take care of Tejo or to live with her.

He says he was helpless for not being able to take everyone’s permission to marry Tejo. Fateh says he became helpless in front of time and situation. He apologizes to everyone for all this. Fateh tells everyone that he will take their forgiveness as his marriage’s blessings. Rupy reminds Fateh that yesterday he left Tejo at the ashram and now married her. He asks Fateh how he can trust him that he won’t leave Tejo alone in future. Fateh tells Rupy that he won’t ever repeat his mistake as now he knows the importance of relationships and marriage. He promises Rupy that he won’t ever leave Tejo’s support even if he will have to fight the whole world for Tejo and even if the whole world goes against him.

Gurpreet tells Fateh that he will realize his mistake, when he will feel troubled in taking care of Tejo. She tells Fateh that she can see what is going to happen in his future. Fateh asks Gurpreet can’t she see that he got happy and lively again, when Tejo re-entered his life. Jasmine feels extremely angry. Gurpreet remains adamant on her words. Khushbeer asks everyone to stop arguing and accept Fateh and Tejo’s marriage. He also asks Gurpreet to perform Fateh and Tejo’s Grih Pravesh. Gurpreet refuses to forgive and bless Fateh.

Fateh’s grandmother tells Gurpreet that no one can do anything in front of God’s will. She asks Gurpreet to accept Fateh and Tejo’s marriage. Jasmine feels very angry thinking that no one cares that her dreams once again got murdered. She thinks, how Fateh and Tejo can marry each other again. Mahi brings pooja thali to perform Fateh and Tejo’s Grih Pravesh. Tejo gets scared seeing the fire of diya. She recalls the fire incident she faced in the past. Everyone, except Jasmine, Gurpreet and Nimmo feels worried for Tejo. Scared, Tejo pushes the pooja thali and it falls down.

Fateh handles panicked Tejo. Mahi gives water to Fateh. Fateh sprinkles water on Tejo and caresses her face. Gurpreet and Jasmine feel angry witnessing Fateh’s care and love towards Tejo. Tejo calms down. Gurpreet asks everyone to see how Virk’s daughter-in-law is. She leaves angrily saying that she can’t ever accept Tejo as her daughter-in-law. Nimmo also angrily leaves asking Fateh to have shame for choosing mad Tejo above/over his mother. Khushbeer asks Fateh to not worry and give some time to his mother. He tells Fateh that he has embarrassed him many times but made him proud today by marrying Tejo.

Fateh hugs Khushbeer. Jasmine burns in jealousy and anger. Khushbeer tells Fateh that today he is proud of his upbringing as he supported the girl (Tejo), who always supported him. Jasmine grows angrier. Rupy tells Khushbeer that he feels peaceful about whatever happened being a father but also feels guilty and burdened thinking about his family. Khushbeer tells Rupy that whatever happened is right. He says Tejo is his daughter too and he is feeling very peaceful seeing Tejo as his daughter-in-law. Jasmine feels very angry. Except Gurpreet and Nimmo, everyone happily welcomes Fateh and Tejo to Virk house.

Fateh and Tejo together and a unique Grih Pravesh ritual is performed. They get everyone’s blessings and love except; Gurpreet, Nimmo and Jasmine. Jasmine gets shocked seeing everyone happily blessing Fateh and Tejo. Satti tells Fateh that she is lucky that her daughter got a supportive life partner like him. Jasmine wishes to bang her head somewhere and leaves angrily. Simran and Mahi take Tejo inside. Khushbeer explains to Fateh that he will have to keep Tejo happy and safe. He also explains to Fateh that he will have to protect Tejo from family members and strangers, who will keep a wrong opinion about Tejo. Fateh hugs Khushbeer.

At Sandhu house, Jasmine recalls Fateh’s love, care and determination towards Tejo. She destroys and throws Tejo’s stuff here and there in anger. Jasmine tells her unborn child that he/she was of no use to her in her conspiracy. She feels a headache thinking that Fateh and Tejo would be in the same room. At Virk house, Fateh shows their room to Tejo. Tejo finds her and Fateh’s room beautiful. Gurpreet’s sudden angry scream scares Tejo. Gurpreet tells Simran and Nimmo that her Fateh who never used to get tired of saying “Mummy…. Mummy”, the whole day is now not listening to her.

Nimmo tells Gurpreet that she can still make Fateh work according to her. Khushbeer stops Gurpreet from talking to Fateh. He says that he doesn’t want anyone to trouble or force Fateh and Tejo into anything. Khushbeer tells Nimmo that she has already messed up her daughter’s in-laws house. He asks Nimmo to not mess up his house too and leave quietly. Nimmo leaves angrily. Tejo on the other hand asks Fateh why his mother is getting angry. Fateh tells Tejo that everyone was surprised and didn’t get the chance to prepare for their marriage, which is why everyone is getting angry.

Tejo tells Fateh that she doesn’t want to live in the Virk house but only their own house. Fateh tells Tejo that he will make a dream house for her, where no one will get angry or scold her. Tejo gets excited and Fateh ties a blindfold on Tejo’s eyes to give her a surprise. Khushbeer asks Gurpreet how they will break Fateh and Tejo’s relationship, which even God failed to break. Gurpreet looks at Khushbeer with shocking expressions. At Sandhu house, Satti says Tejo suffered a lot in life and according to her God rewarded Tejo with Fateh as her life partner. She says that now she feels that her Tejo will get fine and normal soon.

Lovely calls Satti and Rupy selfish. Rupy tells Lovely that they never forced Fateh into anything. He says they were left with no option other than to accept Fateh and Tejo’s marriage. Lovely reminds Rupy that Fateh was going to take responsibility for Jasmine and her upcoming child. She tells Rupy and Satti that they forgot Jasmine while being happy for Tejo. Jasmine evilly smiles seeing Lovely fighting the battle for her. Lovely says Fateh staked two family’s futures just for Tejo. On the other hand, Fateh shows the decorations he made for her. He calls this as his and Tejo’s dream house.

At Sandhu house, Lovely asks Sandhus if Tejo gets scared by fire, then who became the witness of Fateh and Tejo’s marriage. She asks Rupy and Satti if they asked this from Fateh. Lovely’s words push everyone into deep thinking. At the same time, Fateh and Tejo make various promises to each other. At Sandhu house, Lovely asks Sandhus how will Tejo understand the meaning and responsibilities of marriage. She questions Sandhus if Tejo will be able to give an heir to the Virk family. Hearing this, Rupy and Satti get worried, while Jasmine smiles evilly.

Reviewed Rating for Udaariyaan 12th July 2022 Written Update Fatejo wedding: 4/5 This rating is solely based on the opinion of the writer. You may post your own take on the show in the comment section below.