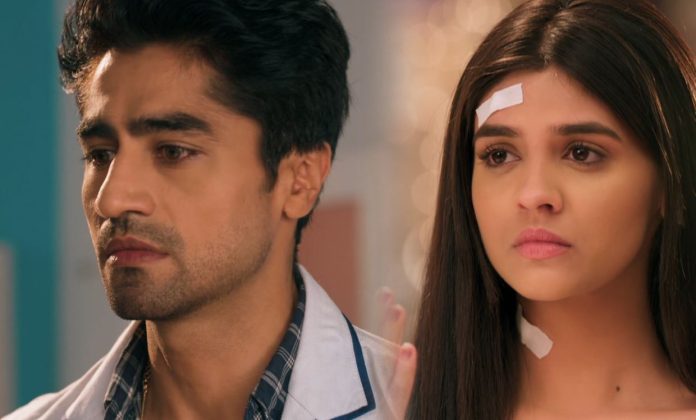 Yeh Rishta 15th July 2022 Written Update Bad news for Abhi Akshara apologizes to Abhimanyu for getting emotional about Aarohi. Kairav calls Akshara and the latter asks the former about Aarohi. Kairav tells Akshara that Aarohi isn’t fine at present. He asks Akshara how everyone is at Birla house. Abhimanyu tells Kairav that Birlas are fine. Manish tells Abhimanyu that they would have done the same thing, if they would have been in his place. Abhimanyu thanks Manish. Manish asks Abhimanyu to take care of Akshara. Kairav asks Akshara to take care of Abhimanyu.

Abhimanyu calms an emotional Akshara. Abhimanyu recalls Akshara exposing Aarohi for her negligence at the hospital. Aarohi recalls Abhimanyu firing her from the job. Abhimanyu tells Akshara that he has to monitor Vihaan (the kid patient who suffered Aarohi’s negligence) the whole night. He asks Akshara to return home. Akshara returns Abhimanyu’s engagement ring to him. She asks Abhimanyu why he hid from her that he has got his MRI done. Abhimanyu tells Akshara that nothing has happened to him and he has got an MRI done only on Anand’s insistence. He apologizes to Akshara in his thoughts for continuously lying to her.

He thinks he can’t tell anything to Akshara about his hand and wrist pain till he gets MRI results. Abhimanyu makes Akshara make him wear the engagement ring. He hugs Akshara tightly and calms her. As Abhira walks out of Abhimanyu’s cabin, Anand arrives there. Akshara sees Abhimanyu’s MRI reports in Anand’s hand. She asks Abhimanyu to read his reports. Abhimanyu gets tense and opens the report. Abhimanyu lies to Akshara that his reports are absolutely fine. A staff member comes and tells Akshara that she has been called to room no. 18. Akshara leaves and Abhimanyu reveals to Anand that he suffered a severe nerve damage.

Shocked, Anand asks how. Abhimanyu tells Anand that this happened when their hospital’s north wing suffered an oxygen cylinder blast. He feels scared and recalls how he faced difficulty in his daily work at home and hospital after the hospital’s fire and blast incident. Anand tells Abhimanyu that he will get his nerve damage, investigated further through his neurologist friend, who works in Delhi. He also tells Abhimanyu that he can’t perform surgeries now. Abhimanyu gets disheartened and says okay to Anand. At night, at Birla house, Akshara wonders if she should talk to Aarohi. She thinks Aarohi may get angry.

Akshara sleeps after texting Kairav asking him about Aarohi. At Goenka house, Aarohi faces difficulty in sleeping. Vansh and Kairav come to see Aarohi. Vansh returns from Aarohi’s room door, seeing that Aarohi slept. One by one all family members come to see Aarohi and leave from outside her room only, seeing her asleep. Abhimanyu also reaches Birla house and finds Akshara sleeping. He recalls how he and Anand decided to keep Abhimanyu’s nerve damage hidden from Akshara till Anand’s neurologist friend gives his opinion on it. Abhimanyu quietly tries to stitch Akshara’s dupatta. He faces much difficulty in this work and thus feels worried.

Next morning, Akshara finds Abhimanyu sleeping weirdly and wonders why. Ignoring this fact, Akshara covers Abhimanyu with a quilt. She keeps her hand on Abhimanyu’s hand. Abhimanyu in sleep pulls back his hand. This shocks and worries Akshara. She again ignores thinking that Abhimanyu did this because he might be seeing some kind of dream. Akshara thinks that Abhimanyu must be tired and thus caresses his face. Abhimanyu wakes up a little. Abhira wishes “Good Morning” to each other. Akshara asks Abhimanyu if he is fine. Abhimanyu signs in yes. When Abhimanyu asks Akshara to sleep more together, she tells Abhimanyu that she has to leave for work.

Abhimanyu caresses Akshara and kisses her forehead. Akshara caresses Abhimanyu and makes him fall asleep again. She gets shocked and confused seeing her dupatta improperly stitched. Akshara decides to visit Goenka house to check if Aarohi has cooled down a little or is still angry. She leaves keeping a heart shaped note for Abhimanyu in their bedroom. Later, Akshara reaches Goenka Mansion. Everyone’s sad faces lift up a little seeing Akshara. Akshara hugs Suhasini and Swarna. On Akshara’s inquiry, Swarna tells her that an angry and upset Aarohi is neither eating anything nor talking to anyone.

When Akshara decides to talk to Aarohi herself, Kairav and Manish stop her. They tell her that her visit to Aarohi won’t be good as Aarohi is very angry and upset with how she exposed her negligence. Manish tells Akshara that they don’t want Aarohi to humiliate her, as she (Akshara) isn’t wrong. Akshara tells her family that she won’t feel bad with her own sister’s words. She says that Aarohi’s anger with her is justified. Akshara says that they need to understand Aarohi at this point of time, instead of expecting anything from her. She goes to Aarohi’s room, with food and juice.

Akshara asks Aarohi to discuss her anger with her later on, after having food. Aarohi tells Akshara that she doesn’t need her food, advice or her company. Akshara asks Aarohi why she is taking out her anger on food. Aarohi rudely asks Akshara to leave and celebrate with hospital staff and her in-laws, who are great people and follow rules and regulations. She tells Akshara that she might be happy and must have been appreciated by Abhimanyu for supporting him, not her (Aarohi). Akshara tells Aarohi that she just supported the truth. Aarohi bitterly tells Akshara to ask Abhimanyu to get her (Akshara) statue built outside Birla house and hospital and worship her.

Aarohi makes Akshara count that she got to learn music, got Abhimanyu, got married and also got a whole music therapy department at Birla hospital, without proving herself. She tells Akshara that she never saw an undeserving and lucky person like her in her whole life. Aarohi further tells Akshara that even after studying hard, working day and night shifts and facing patients’ tantrums, she got a memo. She says even her doctor’s license got canceled. Aarohi reminds Akshara that since childhood she knows how she is obsessed about being no. 1 and best. She accuses Akshara of snatching her work (her only love) from her. Aarohi calls Akshara jealous of her and her ambitions. Akshara feels hurt when Aarohi calls her unambitious. Aarohi also makes the food plate fall in her anger. She tells Akshara that she can’t tolerate her passion and talent. Akshara tells Aarohi that she can’t tolerate her lies. She asks Aarohi how passion can justify what is wrong and what is right. Aarohi tells Akshara that Birla hospital’s music therapy department is a fraud and timepass. This angers Akshara. She shuts Aarohi and tells her that music is her life and she worships it. Aarohi tells Akshara that she didn’t receive any achievement in her music career to make anyone take her seriously.

Akshara explains the importance of women’s works and achievements by making their family and children happy. She also explains to Aarohi that there is a world where people’s talent is tested by personal satisfaction. Akshara says talent and its usage is a very personal thing. Aarohi tells Akshara that losers use such great excuses to hide their drawbacks. She also tells Akshara that she is doing music therapy, so that no one from the achiever Birla family might call her useless or a loser. Aarohi further asks Akshara if she is doing music therapy so that she doesn’t get bored at home or get tagged as a housewife.

Akshara feels shocked by Aarohi’s cheap thinking. Aarohi tells Akshara that she would have fought for her passion in the open market, if she would have been really serious about her career, like her. She asks Akshara if she is fooling the world or herself by following a time pass goal or her husband. In the next episode, Anand will ask Abhimanyu to reveal to Akshara about his hand nerve damage. Akshara will decide to work with India’s magical works, a big platform to pursue her passion. Both Akshara and Abhimanyu will meet each other. They will tell each other that they want to tell something to each other.

Reviewed Rating for Yeh Rishta 15th July 2022 Written Update Bad news for Abhi: 3/5 This rating is solely based on the opinion of the writer. You may post your own take on the show in the comment section below.