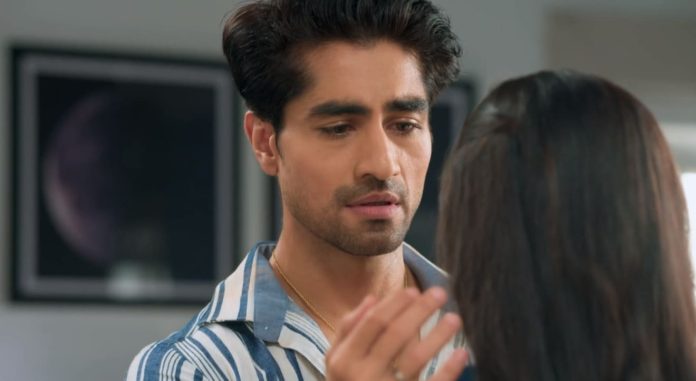 Yeh Rishta 18th July 2022 Written Update Abhi shatters Abhimanyu tests his hands’ capability using a white-board marker. He finds it difficult and feels pain. Abhimanyu immediately sprays a pain reliever on it. Abhimanyu again tries to balance the marker again on his finger but fails. He hopes Akshara comes soon as he misses her a lot. Abhimanyu reads Akshara’s voice note telling him that she forgot to tell him about her today’s appointment with the charity hospital’s patient. Through the voice note only, Abhimanyu asks Akshara to meet him at home only. He overhears a crying wife scolding her husband for hiding his cancer condition from her.

She tells her husband that being his wife she has all rights to be aware of his pain and happiness. Husband apologizes to wife and promises that he won’t ever hide anything from her from now onwards. Hearing all this, tense Abhimanyu decides to inform Akshara about his right hand’s severe nerve damage. On the other hand, Manish tells Goenkas that the prospective groom refused to marry Aarohi after knowing about Aarohi’s negligence at hospital. He says the prospective groom is scared thinking that his reputation in the medical fraternity would get affected by marrying Aarohi.

Aarohi overhears all this. She feels angry and thinks that Akshara and Abhimanyu are to be blamed for all this. Abhimanyu returns home and hugs Akshara. Before Abhimanyu could tell Akshara about his hand’s severe nerve damage, Akshara tells him that she sent her audio clip for India’s magical voice. Akshara asks Abhimanyu if he is happy seeing her using her talent by coming out of her shell. She tells Abhimanyu that she will have to go physically for the second round of this musical competition if she clears the first one. Akshara tells Abhimanyu that she is feeling scared. She asks Abhimanyu to quickly tell her if she should go for the second round or not.

Akshara tells Abhimanyu that she is doing something like this for the first time in her life. She also tells Abhimanyu that she knows that he will be there for her, if she suffers panic attacks. Abhimanyu decides to hide about his hand’s severe condition from Akshara for the time being. He happily asks Akshara to go for the second round as he has full confidence in her. Abhimanyu tells Akshara that he is very happy seeing her showing up the strength about moving forward in life, facing all her fears. Akshara feels happy knowing that Abhimanyu is happy for her and about her decision.

She thanks Abhimanyu and tells him that she is doing all this for him and her family. Abhimanyu tells Akshara that he and family get happy seeing her happy. He makes Akshara sit with her guitar and claps for her using Alexa’s applause feature. Abhimanyu tells Akshara that her magical voice will make people crazy. He makes Akshara feel he and the audience clapping and cheering for her, seeing her performing on a big platform. Happy and emotional Akshara wipes her tears. She starts singing, “Kaise Hua” song from the film Kabir Singh. Abhimanyu also joins Akshara in singing.

Goenkas feels worried thinking that angry and upset Aarohi is not talking to anyone. At the same time, Kairav receives Abhimanyu’s voice note. Akshara’s songs play up through the voice note. Through another voice note, Abhimanyu tells Goenkas that Akshara is preparing for India’s magical voice’s audition. He tells everyone that he is very happy knowing that Akshara is going to do something for herself for the first time in life. Abhimanyu also tells Goenkas that they can’t help Akshara in signing but can at least wish her “All the best”. Goenkas feels happy, especially Kairav.

Kairav says for the first time, his sister Akshara is thinking about herself. He says otherwise Akshara always keeps worrying about family, him and Aarohi. Everyone feels proud of Akshara and prays for her win. Aarohi feels very angry and jealous. overhearing all this. At Birla house, Akshara pins Abhimanyu to a wall and gets romantic with him. Abhimanyu gets naughty, which makes Akshara shy. Akshara walks downstairs. Downstairs, Akshara gets a beautiful surprise from Birlas and Goenkas. Kairav and Vansh congratulate Akshara for fighting herself and finally deciding to do something for herself. Manjiri praises Akshara for standing up for her dreams.

Akshara tells everyone that Abhimanyu helped her a lot in agreeing and preparing for India’s magical voice competition. She thanks Abhimanyu and makes everyone clap in applause for him. Neil makes Akshara listen to a child named Cheeku’s voice note. Cheeku makes Akshara emotional by showing confidence in her singing talent. Some other people and patients of Akshara wish her “All the best” for the musical competition. Abhimanyu explains to Akshara to recall all these people’s motivating words, whenever her confidence starts falling down, while performing on stage. Vansh asks an emotional Akshara to stop crying and cut the cake.

Akshara wipes her tears and convinces everyone to cut the cake with her. Kairav asks why. Akshara tells Kairav and family that all of them have equal rights over her happiness. Everyone cuts the cake together. Abira feeds the cake to each other. After this, one by one, everyone feeds cake to Akshara and each other. Then everyone starts dancing together. Aarohi receives a video, showing everyone celebrating Akshara’s happiness and big decision. She feels very angry and jealous of Akshara. Angry Aarohi thinks that Akshara is partying after ruining her career. Abhimanyu is seen secretly taking his medicines. Suspicious Akshara walks towards Abhimanyu.

Reviewed Rating for Yeh Rishta 18th July 2022 Written Update Abhi shatters: 3/5 This rating is solely based on the opinion of the writer. You may post your own take on the show in the comment section below.