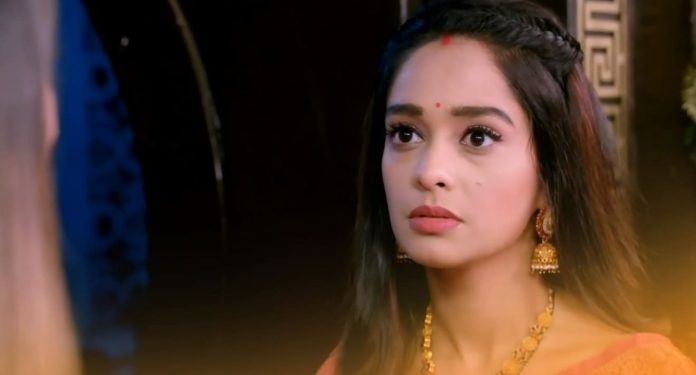 Kumkum Bhagya 20th July 2022 Written Update Rocking Aaliya asks Pallavi to let Prachi leave if she wants. She advises Pallavi to not stop Prachi this time, its better for Rhea if they get rid of Prachi. She hates Prachi. She asks Prachi to stop Ranbir, Dida and Vikram if they stop Prachi from leaving. She tells that if Prachi stops at the door, then Pallavi should hold Prachi’s hand and drag her outside the house. Pallavi is upset with Ranbir and Prachi’s relation. Aaliya and Rhea expect Pallavi to throw Prachi out of the house. Ranbir fails in convincing Prachi to stay back for their baby’s sake.

Pallavi stops Prachi at the door, but for a good reason. She tells that Prachi can’t leave them and go. She adds that the bag will stay inside the house and also the bag owner. She tells Prachi that she has accepted Prachi as her bahu, and doesn’t want her bahu to leave the house. Pallavi’s huge change shocks Prachi. Rhea and Aaliya are also shocked, while Ranbir is happily surprised. What makes Pallavi accept Prachi in the family? Keep reading.

Earlier in the show, Shahana replies to Ranbir that Prachi has gone home to pack her bags. Rhea prays that Prachi goes away. Ranbir takes a cab and rushes to home. Prachi packs her bags. She cries over her relation with Ranbir. Ranbir meets with an accident. He leaves the cab and runs on the road to reach home. He comes home and shouts Prachi’s name. He gets hurt. He doesn’t find Prachi in her room. He loses hopes and cries. Prachi comes out of the washroom. Ranbir stops on seeing her and gets a hug relief. He gets on his knees, crying and appealing that she doesn’t leave. She asks him why should she stay back. He asks her to stay back for his sake. She doesn’t want to stay back for him. He asks her to stay back for their baby’s sake.

Ranbir asks Prachi to stay back. She refuses, saying that its time that she goes away. He begs her to stop. He tells that if she goes away, then he will die. She slaps him to rebuke him for talking of death. He tells that she is preparing to kill him, by packing his life in her bag by her decision to leave. He begs her to give him a reason to live. He asks her to stay back and return his life. He hugs her. She tells that he just talks, and doesn’t keep his promise. She is much angry on him. She tells that she can’t talk of love with him, because he had abandoned her. She reminds that he left her alone.

Ranbir hugs her to calm her anger. She tells that he promises, lies and shows dreams. She doesn’t want to tolerate his lies further. She adds that she gets hurt by the broken dreams, she doesn’t want to trust him and weave new dreams. She loses all the hopes. She asks him not to stop her. He tells that he has faith that he will fix everything for them. She doesn’t think he can fix anything. He asks her to give him one last chance, because he has a reason now, that’s their baby. She tells that she has nothing left in her heart.

She states that she has no patience, and not even any feelings, she has a life within her, but she is broken completely, she is just a weak person who can’t show any courage now. She wants to go and save herself. She tells that she can’t stay happy in his house. She begs him to spare her life and let her go. She calls their relation over. She asks him to accept their breakup, their separation, they are meant to get separated. She advises him to stay with his family, who needs him the most. Ranbir cries looking at her with hope. She tells that she will shatter down if he makes it more tough for her. He permits her to go. They shed tears. He tells that he will take her bag outside. Her bag falls and opens up. He finds his photos.

She tells that it might have come by mistake. He wants to know her feelings. She tells that she can also make mistakes like he does mistakes repeatedly. He tells that he didn’t learn to love, so he couldn’t become a perfect lover, but he has understood that she can’t bid a bye to him, she loves him, she should listen to her heart and stay back. He asks her to take him along, he wants to live with her forever. He adds that she is the one who taught him to love, she can never teach him to separate from her. She cries sadly. He kisses her with love. They share a hug. They both wish each other’s good.

Aaliya and Rhea come home with the family. Aaliya tells that she will ask Pallavi to throw out Prachi from the heart, even Dida can’t help Prachi this time. Aaliya brainwashes Pallavi. She asks Pallavi to make up for all the bad times, get rid of Prachi, who isn’t right for Ranbir, Rhea and the family. She reminds that Prachi tried to kill Rhea’s baby. She tells that nobody will be happy until Prachi is at home. Rhea tells that Pallavi loves her, but she has to prove this by ousting Prachi. Aaliya tells that Prachi is clever, she has always tried to separate Ranbir from his family, Ranbir can leave the house once again, its better that Prachi leaves.

She asks Pallavi not to melt her heart if Ranbir cries. She further tells that Rhea should get the rights for her baby. She suggests that Pallavi drags Prachi out of the house. Shahana overhears this and questions Aaliya about her hatred for Prachi. Prachi doesn’t allow Ranbir to wipe her tears. She tells him that she won’t stop for his sake, she wants to go and she will go. Ranbir hugs her to stop, requesting her to not leave. She asks him not to hurt her, his touch hurts her, she doesn’t find peace in their relation anymore. He apologizes to her for hurting her. She tells that he should have tried to feel her pain before. She blames him for ignoring her pain always.

He asks for a chance to fix the mistakes. She tells that her soul is dead now, he can’t fix anything. He promises that he will fix everything. She tells that she had come back to him to share about her pregnancy, she had forgiven him, but she had seen him marrying Rhea. She asks why should she stay back when she got the news of Rhea’s pregnancy. He asks her to stay back for the sake of their coming child. Shahana tells Aaliya that Prachi is leaving the house herself. Aaliya replies that Prachi just pretends to leave, but never goes. She asks Pallavi to make Prachi leave from Ranbir’s life.

Prachi asks Ranbir not to act great, that he cares for the baby. She asks him if he didn’t guess about her pregnancy. He accepts his mistakes and apologizes. He asks her to forgive him once. She begs him to let her go. She tells that she had sworn to ruin him when she saw him marrying Rhea, she had hidden her baby’s news to make him yearn for the baby all his life, she wanted to take revenge on him. He tells that his Prachi can never do this. She tells that the Prachi he loved has died, he has not rectified any of his mistakes. She wants to rectify her mistake, so she removes his photos from her bag. Kohlis find Prachi leaving. Pallavi begs Dida to not stop her. Ranbir is devastated. Prachi thinks its too late now. Rhea and Aaliya get happy seeing Prachi at the door. Rhea wants Prachi to leave.

Reviewed Rating for Kumkum Bhagya 20th July 2022 Written Update Rocking: 2/5 This rating is solely based on the opinion of the writer. You may post your own take on the show in the comment section below.