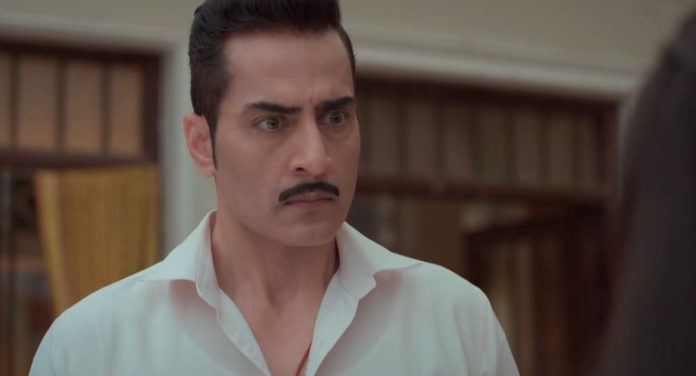 Anupama 26th July 2022 Written Update Vanraj lashes out Barkha asks Anupama to calm down. Adhik comes and tells everyone that he went to Shah house. Shocked, Anupama and Anuj ask Adhik what Vanraj said. Angry Vanraj comes and screams that he didn’t say anything to Adhik. Anuj notices that Vanraj’s loud pitch scared little Anu. Vanraj loudly says that he himself came to say whatever he wants to. Barkha, Adhik and Pakhi get scared and worried. At Shah house, Bapuji questions Baa why she sent an angry Vanraj to Kapadia house, even knowing that unnecessary drama will take place.

Baa says why Anupama needed to stop Pakhi at her house. She says now Anupama will face the consequences of what she did. Bapuji feels worried thinking about what will be going on at Kapadia house. At Kapadia house, Anuj stops Vanraj and asks Anu to go to her room. Anu asks Anuj if he and Vanraj are going to fight. Vanraj asks Anuj if he also told his daughter, who is a hero and who is a villian. Anuj feels angry with Vanraj’s words. Anupama tells Anu that everyone is going to have an adult discussion, not fight. She asks Anu to go and play in Sara’s room.

Little Anu asks Vanraj to later come and see her doll house. She tells Vanraj that she will make him drink ginger tea too. Anu leaves after getting assured that Anuj will be with Anupama. Vanraj ignores Anupama and angrily asks Pakhi to return home with him. Pakhi refuses and says that she wants to stay at Kapadia house only. Vanraj tells Kapadias that they tried very hard to snatch his children from him. He tells Anupama that she must have provoked Pakhi to stay at Kapadia house. Ankush tells Vanraj that he understands that he is tense but he should not always say everything the same way.

Anupama tells Vanraj that like Pakhi isn’t listening to him, she isn’t listening to her either. She asks Vanraj what she should do. Anupama asks Vanraj if she should oust Pakhi by threatening her. Vanraj tells Anupama that children never agree with elders but instead elders have to force children to agree with them. He asks to see how it is done. He angrily screams at Pakhi, asking her to come with him. Anuj feels very angry with all this. Vanraj tells Pakhi that he is stronger and above her in adamance. He also tells Pakhi that he will drag her to home, if she doesn’t agree to him.

Pakhi repeatedly says she won’t return home. Anuj angrily asks Vanraj and Pakhi to stop. Anuj asks Vanraj to nor scream at his house door. He also asks Vanraj to go to a room and talk to Pakhi politely. Vanraj reminds Anuj that he also created drama at his house, pandal and neighborhood. He asks Anuj why he is getting troubled when he is doing the same at his house door. Ankush tells Vanraj that he himself created drama at his own house, pandal and neighborhood. Vanraj asks Ankush how he knew about it when he himself wasn’t there. Ankush tells Vanraj that everyone present here knows that creating drama is in whose blood.

Both Vanraj and Ankush indulge in an argument. Anuj asks them to get quiet. He requests Vanraj to stop shouting or screaming. Vanraj asks Anuj if he is getting worried about his status in his posh society. Anuj says he doesn’t care about his status, but his daughter. He tells Vanraj that Anu will get scared with his loud voice. Anuj tells Vanraj that Anu already saw his drama at Shah house and doesn’t want a drama to be created again at his house. Vanraj tells Anuj that he even has a daughter and is worried about her. He says he just came to take his daughter back. Anuj asks Vanraj to take Pakhi with him without any drama as no one is stopping him.

Pakhi tells Anuj that she doesn’t want to go with Vanraj. Pakhi says the matter ends here as she won’t go with Vanraj. Barkha and Adhik smirks evilly. Barkha asks, what is the need to create such a big issue if a daughter wants to live at her mother’s house. At Shah house, Baa blames Kavya for making Vanraj angry by thinking about giving Pakhi’s clothes to Adhik. Baa says if she would have an intelligent daughter-in-law, then she would have sent away Adhik from the door only. She taunts Kavya for being lost in eyebrows the whole day. Kavya angrily asks Baa to stop taunting her. She asks Baa how she will feel, if someone will whole day call her as “jhule waali, taane waali and ghutne mein dard waali”.

Kavya angrily questions Baa why she keeps taunting her the whole day. She tells Baa that judging anyone’s personality and character by their choice of clothes or complexion is very wrong. Kavya asks Baa to neve ever judge anyone’s choices. She tells Baa that if sitting the whole day on a swing is her own choice, then wearing any type of clothes is her and Barkha’s choice. Kavya asks Baa why only her choice should be respected. She also asks Baa why she keeps taunting and blaming her for whatever wrong happens. Kavya tells Baa that she can take out her mistakes, only if she will give her all the responsibilities of the house. She asks Baa how she is at fault, if she herself is handling the house’s all kinds of responsibilities. Kavya tells Baa that she is not perfect, but also not that bad that she will hear her taunts on a daily basis. She also tells Baa that she is also trying to take care of Kinjal just like her. Kavya further tells Baa that she (Kavya) can’t do the things she (Baa) is doing and she (Baa) can’t do the things that she (Kavya) is doing. Baa feels irritated. Kavya interrupts Baa and tells her that she doesn’t trust her at all and keeps complaining to Vanraj about her in her absence.

She tells Baa that she can’t do anything when she (Baa) isn’t ready to give her the rights and responsibilities of a daughter-in-law. At Kapadia house, Vanraj asks Barkha to not interfere in his family matters as otherwise he will say something that will make her family members angry. Anupama asks Pakhi to return to her home. Anuj tells Pakhi that he already told her that he has no pro with her staying at Kapadia house. He reminds Pakhi that he also told her that his permission won’t matter till her parents agree with her staying at Kapadia house. Anuj asks to go home as her father wants it. He asks Pakhi to come some other day.

Anuj stops Barkha from speaking in between. Anupama and Anuj give angry stares to Barkha. Adhik feels angry witnessing all this. Vanraj tells Pakhi that he won’t let her do what her mother did. Anuj and Anupama feel angry. Anupama asks Vanraj what she did. Vanraj reminds Anupama that she started living with Anuj in the name of friendship. Vanraj asks how he can blame his daughter, when her mother herself did wrong work. Anupama defends her love for Anuj, saying that she didn’t cross any limits in love.

Anupama tells Vanraj that he doesn’t have the right to raise fingers at her. She reminds Vanraj that she fell for Anuj after their divorce. Anupama also reminds Vanraj that he was having an extra-marital affair in the past. Vanraj asks Anupama if she married Anuj to compete with him. Anuj tells Vanraj that if only he can fall in love. Ankush, Anuj and Vanraj indulge in an argument. Anupama asks Pakhi to leave with Vanraj now. Pakhi calls her parents, people with double standards. She asks her parents why she is considered wrong, if she is doing the same thing that her parents did. Pakhi says at least she is of the proper age of falling in love.

Pakhi tells Vanraj that she doesn’t need an excuse to live alone with Adhik. She says she and Adhik are adults and can live together by buying a separate house. Pakhi says she and Adhik want to live with/in between their family only. She tells her parents that she is shocked that they don’t trust her (their own upbringing). Pakhi tells her parents that she and Adhik know their limits. Vanraj tells Pakhi that only she and Adhik is right, everyone else are stupid and wrong. He asks Pakhi to stay at Kapadia house forever. Vanraj tells Pakhi that she won’t ever be accepted or allowed to stay at Shah house, if she decides to stay at Kapadia house today.

Vanraj’s words shocks Pakhi, Anupama and Barkha. At Shah house, Baa keeps blaming Anuj and Anupama for Pakhi’s wrong decision. Kavya explains to Baa that if Pakhi and Adhik really have wrong intentions, they won’t go to a house with lots of people in it. Pakhi hugs Anupama and taunts her, by telling her that she is ousting her from her house, because of Anu. In a low voice only, Pakhi also tells Anupama that life is very unpredictable. She further tells Anupama that maybe she (Pakhi) comes to Kapadia house permanently and she (Anupama) won’t be able to do anything about it. Anupama gets tense hearing this.

Pakhi leaves with Vanraj. Anuj notices Pakhi eyeing a tense Anupama angrily, while leaving. Anuj gives Anu to Ankush and goes to Anupama. He makes a tense Anupama drink water. Anupama also makes Anuj drink water. Anuj hugs Anupama. Barkha notices this and wonders why can’t anything or anyone separate Anuj and Anupama. Pakhi angrily returns to the Shah house. Baa scolds Pakhi for showing attitude. She keeps on scolding Pakhi for whatever she did today. Bapuji tries to stop Baa. Pakhi shows attitude to Baa and confidently tells Baa that she likes Adhik, Kapadia house, Kapadia family and their lifestyle. She also angrily tells Baa that she will go to Kapadia whenever she wishes too.

Pakhi’s tone with Baa shocks everyone. In front of everyone, Pakhi accepts that she wants to live in luxury. She says she also wants to live in peace, which she doesn’t get at Shah house. Pakhi tells everyone that she feels like running away from home, seeing daily drama and arguments of her family members. This shocks everyone. Pakhi tells Vanraj that Anuj is the bestest father. She tells Vanraj that he scolded her in front of everyone while Anuj kept his daughter away from his (Vanraj) anger. Pakhi also tells Vanraj that Anuj neither doubted her or had any issues with her staying at Kapadia house, but he (Vanraj) had. She further tells Vanraj that he doesn’t trust his own daughter. Vanraj screams angrily at Pakhi. In the next episode, Anupama will decide to not let any of her children go away from her. Later, Anupama will have a nightmare that all her family members, even Anuj left her. She will scream Anuj’s name in tension.

Reviewed Rating for Anupama 26th July 2022 Written Update Vanraj lashes out: 3/5 This rating is solely based on the opinion of the writer. You may post your own take on the show in the comment section below.