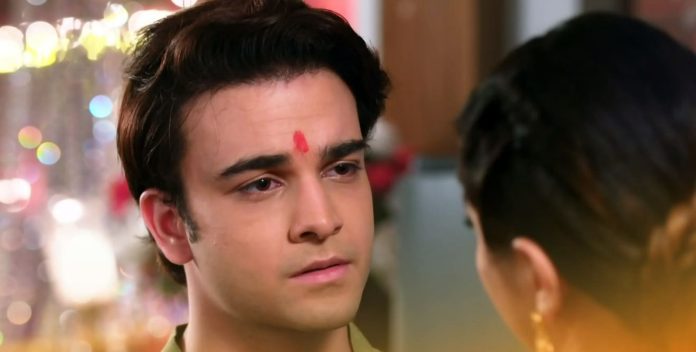 Kumkum Bhagya 29th July 2022 Written Update New conundrum Vandy tells Dida that she held Rhea’s hand and didn’t feel anything. She reveals that Rhea isn’t carrying any baby. Pallavi overhears them and is shocked. Dida is also moved by Vandy’s word. She doesn’t know if Vandy is saying the truth or not. Pallavi acts of repentance in front of Ranbir. She cries emotionally to make him emotional. She tells that she has made many mistakes in the past, but she will try her level best to make up for it, by giving much happiness to Prachi. She tells that she will remember all her mistakes and never repeat it. She asks Ranbir to forgive her once. Ranbir hugs Pallavi, while Rhea watches the latter’s drama. Rhea still suspects Pallavi to be truly supporting Ranbir and Prachi. Will Pallavi learn about Rhea’s fake pregnancy and get against her for real? Keep reading.

Earlier in the show, Pallavi stops Prachi from leaving. She tells that Rhea will leave the house. Ranbir agrees with Pallavi’s decision. He calls Rhea a big threat for his baby. He ousts Rhea. Rhea asks him about their baby. Ranbir doesn’t listen to her. He tells that Rhea has no right to become a mother. He asks her to get out. She refuses to move. Pallavi asks Rhea to leave and not force her to do anything worse. The entire family asks Rhea to get out. Rhea goes to stab Prachi’s stomach with a knife, saying the family won’t get Prachi’s baby. Ranbir holds Rhea’s hand and stops her from stabbing Prachi. Rhea’s big move shocks the family. Ranbir threatens Rhea and throws her out of the house. Seems like a hugely dragged imagination scene of Rhea.

Rhea shouts and begs Ranbir to let her in. Prachi asks Rhea where is she lost. Rhea gives her the gift and also the wishes. She stays in her control. She gives good wishes to Prachi. Pallavi thanks everyone for coming to bless Prachi and making the function more better. She asks them to come ahead for a fun game. She tells the family about the Gudda Guddi game, where the baby’s parents compete being blindfold. She explains the gameplay to Ranbir and Prachi. She tells that they shall see if the baby is a boy or a girl. She asks Rhea to tie the blindfold to Ranbir and Prachi. Rhea refuses. She makes an excuse.

Aryan and Shahana come ahead to help. The family begins the game. They let Prachi play the game first and want to see what Prachi chooses. Pallavi tells that they will not let Prachi so soon about her choice. She asks Ranbir to come, they shall see what he wants. Ranbir knows Prachi wants a boy/their son, but he wants a girl, a lovely daughter. Ranbir leaves the toy garland and goes to Prachi. He reaches Rhea first, and then steps back. He takes the toy from Prachi’s hand. He tells that his Bhagya is in Prachi’s hand, their destiny is one, so he accepts whatever is there in Prachi’s hand. Everyone applauds Ranbir and his true love. Vandy finds Rhea making an angry face and takes Dida with her to tell something.

Aryan, Shahana and Mili also sing praise of Pranbir love. Vandy tells Dida that she has come to tell something serious. Dida asks her what does she mean to say. Vandy tells that she can know well about a lady’s pregnancy. She tells Dida that she has held Rhea’s hand, and felt everything is dark, like Rhea isn’t carrying a baby. She adds that she told Pallavi about Prachi’s lucky baby and Rhea’s unlucky baby. Pallavi overhears them. Dida asks Vandy not to make her worry for no reason. Vandy asks her to end Rhea away, else it will be a big problem. Pallavi grows worried. The family dances on the dhol music.

Aryan performs with the family. Pallavi sees Rhea and recollects Vandy’s warning. Ranbir asks Prachi for dance. They romantically dance, much to Rhea’s annoyance. Ranbir hugs Prachi with love. They get applauded for their beautiful performance. Ranbir thanks the guests for coming to bless Prachi. Shaina asks Rhea to come with her. Shahana and Aryan meet and have a conversation like before. They both compliment each other for not changing much. She tells that she gets nervous when she talks to him. He tells that she will get any nice guy than Stanley. He jokes on Stanley. She asks him not to backbite. He tells that she can get a dashing guy, anyone she likes. She asks is he serious. Mili finds them together. Aryan tells that they were talking about the past. Prachi joins the conversation.

Ranbir comes after Prachi. He asks Prachi to have sweets. She refuses. Ranbir insists her to have it by his hands. Pallavi comes as well and asks them if she disturbed them. Ranbir asks Pallavi to feed the laddoos to Prachi. Pallavi tells that she made the laddoos for Prachi, its really healthy. Prachi agrees to have it for Pallavi’s sake. Pallavi has changed for the good, and everyone is happy to see this. Mili wishes that she gets a sweet caring mother in law like Pallavi. Ranbir follows Pallavi. He tells her that Mahua told him about the costly sweets delivered before the party began. He asks why did she lie to Prachi that she made the laddoos. Pallavi comes up with an emotional excuse to fool Ranbir.

Reviewed Rating for Kumkum Bhagya 29th July 2022 Written Update New conundrum: 3/5 This rating is solely based on the opinion of the writer. You may post your own take on the show in the comment section below.