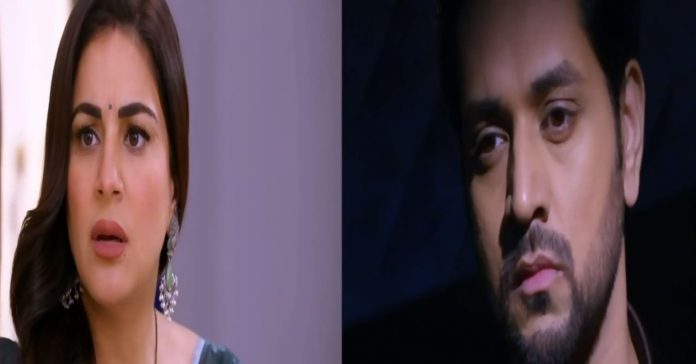 Kundali Bhagya 28th July 2022 Written Update Karan’s mystery Rishabh and Preeta arrive at Arjun’s house. They feel weird seeing the goons leaving from Arjun’s house. The goons are also shocked to see Rishabh at Arjun’s place. They make a leave. Rishabh and Preeta meet Arjun, and apologize for the misunderstandings. They invite Arjun in their anniversary party. Karan tells that he will surely come in the party. Preeta feels odd hearing Arjun. She still battles her feelings about Arjun’s resemblance with Karan. Will Preeta be able to crack the mystery behind Arjun’s identity? Will she identity her Karan? Keep reading.

Earlier in the show, Anjali informs Arjun about the goons barging in the house for money. She tells that she had locked the door. Karan isn’t scared of anyone. He goes and opens the door. The goon asks for the payment. Karan tells that Vishnu had almost killed Rishabh, its not about money, but of ethics. He adds that Vishnu has done a wrong thing and gave him stress. The goon demands the money with interest. He threatens him about Anjali. Karan gets mad at him.

The goon asks him if he loves Anjali. Karan catches his collar. The goons keep the knife at his neck. Karan tells that he will take just 2 seconds in killing all of them. He threatens them by showing the gun in his hand. The goons get scared and run away. Karan stops them and asks them not to make a mistake like fools. He tells that he will forgive them if they apologize to Anjali. Anjali slaps Vishnu. Vishnu tells that he is okay with the slap. He apologizes. The goons apologize, feeling terrorized of Arjun. Karan asks them to get out. Anjali feels protected with Arjun.

Rishabh asks Preeta not to feel nervous. He tells that he is with her, she shouldn’t worry. She also shows her faith on him. She tells that he is right, she doesn’t have any worry when he is with her. He tells that he likes it when she shows her faith. Raja asks Vishnu why didn’t he do the work well. Rishabh and Preeta get down the car, and hear the goons talking. Vishnu identifies Rishabh and gets aside. Raja asks who was he. Vishnu tells that Arjun had hired him to hurt Rishabh. Raja asks why did Rishabh come to meet Arjun. He finds the matter fishy. Karan asks Anjali why is she staring at him, he is already engaged. Anjali asks hm not to joke. He scares her of Nidhi.

She tells that the goons were dangerous, they would have done anything. He asks her why is she scared when she knows martial arts. She tells that she knows it, but didn’t practice since a long time. He asks her why didn’t she practice on those goons. He shows the real gun that can kill anyone. She asks him to pay the goons, else they will come again to trouble them. Karan tells that he isn’t scared of wrong people. Bunty tells Raja that Arjun is so smart, he is dashing and stylish, his action was amazing. Raja slaps him in anger. Bunty gets dizzy. Raja asks Vishnu to drive the car.

Raja tells that he will not leave Rishabh and Arjun. Rishabh and Preeta come to the door. Karan tells Anjali that he is happy, something good is going to happen today. She asks him if he isn’t okay. He goes to check the door. Karan is surprised to see Preeta. They have a moment, until Anjali and Rishabh come in the scene. Rishabh tells that everything is much better than before. He asks Arjun if he won’t ask them to come inside. Anjali asks them to come in. Rishabh holds Preeta’s hand and takes her. Karan grows jealous and angered. Anjali and Karan treat Rishabh and Preeta well. Karan reminds Preeta of their moment. Rishabh asks is Arjun thinking why did they come.

Karan tells that Preeta likes to slap him. Rishabh apologizes to him. He asks Arjun to understand that Preeta is disturbed since a few days. He tells that their relation has started on a wrong note. Preeta admits her mistake and apologizes. Karan tells that its easy to slap someone. He asks what did he do, he showed a play on Karan’s life, she overreacted and slapped him when he asked for the dance, she came to the hospital and slapped him without thinking anything. He tells that its her overreaction. Rishabh tells that even Arjun overreacts, like he saved Kavya and took her to the hospital, he did the same thing in the party. He adds that they lost Karan, so their reaction was not wrong. He feels strange when Arjun is around, but still feels connected to him.

Rakhi is excited to meet Rishabh and Preeta, who went to meet Arjun. She looks at the door. Mahesh comes and tells Rakhi that he took Rishabh’s car today. She tells Kareena that she wants to invite Arjun in Rishabh and Preeta’s anniversary party. Mahesh forwards her Arjun’s number. Rakhi asks him if she can invite Arjun. Mahesh thanks her for giving him so much respect. Kareena tells that Arjun will come if he has forgiven them. Karan asks Preeta why is she delaying in apology. Rishabh apologizes to him, but he wants Preeta to say sorry, because she has slapped him. Preeta says sorry, but Karan wants her to repeat it. She misses Karan even more by seeing Arjun’s behavior. She apologizes to Arjun again. Karan gets emotional.

Reviewed Rating for Kundali Bhagya 28th July 2022 Written Update Karan’s mystery: 4/5 This rating is solely based on the opinion of the writer. You may post your own take on the show in the comment section below.