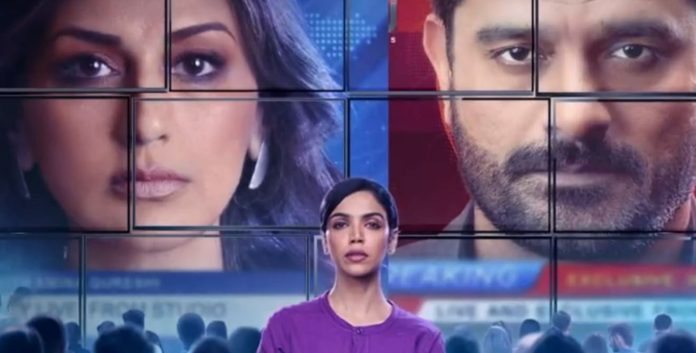 The Broken News Episode 2 Facts Vs Accusations In the morning, a person named Vishnu (Stringer) calls up Radha. Radha asks Vishnu if he got any news on India Organix. She also asks Vishnu if farmers are ready to give a statement on camera. Vishnu tells Radha that he can even shoot an interview and piece to camera and upload it if she permits. He also tells Radha that this way, she will be able to see his reporting skills as well.

Radha asks Vishnu to work on another news story, next time, as for now, she is sending Kamal to him and he will handle everything. On the other hand, Lisa and Dipankar discuss how they came into the profession they are presently working in. Lisa says she turned her passion into her profession. Dipankar reveals that he has come from a low class background, where people didn’t speak much and were never heard too by anyone. He calls people of his old society and background as dumb public. Dipankar says today the son of same dumb public speaks on TV and everyone listens to him.

Lisa feels impressed by Dipankar. Later, Radha meets Kamal’s friend Ayesha secretly. Ayesha gives Radha a backup drive of City Glitz Mall’s fire incident. Radha checks out Mall’s fire incident’s footage carefully. She gets an important clue for her investigation in the form of a vehicle number plate. Radha checks the vehicle number details through the RTO website. Through this, she reaches another clue, that the vehicle belongs to a woman named Manjula Nair from Gamdevi. Radha gives some cash to Ayesha and thanks her. She requests Ayesha to not tell anyone that they met, not even Kamal. Ayesha agrees to it and Radha leaves from the secret place.

Later, owner of Awaaz Bharti, Radhe Shyam Bansal, calls Amina and fixes a meeting with her, to discuss a marketing proposal that came from India Organix. On the other hand, Dipankar gets adamant and tells Ketan Kedia (owner of Josh 24/7) that he won’t work on Anurag Bhatia’s story. Ketan scolds Dipankar for not listening to anyone fully. He makes Dipankar agree to work on Anurag Bhatia’s news story by telling him that they need to condemn Anurag tonight, not hail. Dipankar reaches his office’s conference room and shows Anurag Bhatia’s photograph to his employees.

Praful tells Dipankar that Anurag is respected by people as he gives employment to them. He also tells Dipankar that Anurag offers charitable hospitals and education for the poor. Dipankar tells Praful that Anurag must be taking much from somewhere, if he gives so much to people. Praful agrees to help Dipankar with Anurag’s both black and white balance sheet. Anuj agrees to help Dipankar by bringing information on Bhatia Secutech’s small and old controversies. Praful agrees to call Damani (Dalal Street’s expert player) on Dipankar’s orders to get information on Anurag Bhatia.

Pankaj Awasthi (Aawaaz Bharti employee) and Amina tell other journalists of their news channel that they will lose their channel and business, if they don’t get TRP’s. Radha tells everyone and Amina that Kamal is working on a big story and they can break it tonight, if all goes well. She makes Kamal talk to Amina and everyone through video chat. Kamal tells Amina that he is working on an exposé. Radha explains to Amina that India Organix is exploiting their contract farmers. Pankaj reveals that India Organix’s claim to fame is their tag line “Farmer’s Friends”. Pankaj tells Amina that it’s an interesting story for breaking news.

On Aamina’s questioning, Juhi (Awaaz Bharati journalist) discusses information on 70’s hero, Vimal Kumar. Juhi reveals that Vimal Kumar is suffering from lung cancer and doesn’t have money for his treatment. She says that “Save Our Hero” has been trending on twitter for 2 days and also an online petition is going on for it. When Amina asks Juhi to work on Vimal Kumar’s story, Radha tells Amina that Juhi is already working on the Sure Cure hospital story, which they will be breaking the next day. Amina asks another employee Faisal to work on Vimal Kumar’s story. Worried Juhi runs behind Radha but fails to tell her that she hasn’t worked on the Sure Cure hospital story yet.

Juhi receives a call and tells the other person on call that she is skipping the Bansal’s party tonight. Radha reaches Manjula Nair’s house. She steals a letter from Manjula’s house door. A neighbor comes out. He tells Radha that Manjula died of covid in 2020. Neighbor also tells Radha that he hasn’t seen Prasanna Nair since about 16th october. As Radha leaves, Manjula’s neighbor clicks Radha’s pictures. An injured man is seen tied up in Manjula’s neighbor’s house. On the other hand, Radhe Shyam leaves Amina with Raghav (Radhe Shyam Bansal’s son) to let them discuss India Organix’s marketing proposal.

Amina gets angry at Raghav, when he tells her that Awaaz Bharti will just have to broadcast stories on India Organix’s 4 times in a month, whose copy will be given by their PR agency. Raghav tells Amina that no one will get to know that India Organix’s story is not news, but PR. Angry Amina asks Raghav if he wants her to cheat and lie to her audience. She gets shocked knowing that Radhe Shyam knows about India Organix’s deal for Awaaz Bharati. Raghav shocks Amina more by telling her that Awaaz Bharati is already at loss for the last 3 years and soon it might get shut down. He asks Amina to at least think about Radhe Shyam.

Ketan pressurizes Dipankar more to release a breaking news on Anurag Bhatia tonight on Josh 24/7’s prime time. Angry Dipankar gives 1 hour to his employees to anyhow get information on Anurag Bhatia. On the other hand, Kamal and Radha explain to Amina that India Organix buys things from farmers/tribals in Rs.10 and then sells in the market for Rs. 300. They also tell Amina that they have farmers’ testimony and copies of their contacts with India Organix. Amina shows reluctance in breaking India Organix’s story due to many reasons. Kamal receives mail from India Organix in Awaaz Bharati news channel’s mail box.

He tells Radha that Amina is showing reluctance in exposing India Organix, because India Organix has become Awaaz Bharati’s corporate partner. Radha leaves angrily, without letting Amina explain her point. Both Dipankar and Amina are seen tensed about their news channels and it’s prime time news. On the other hand, Vishnu gives a big lead to Kamal, which can expose and destroy India Organix. Vishnu tells Kamal that food authorities did some testing in India Organix’s people farms. He also tells Kamal that this testing report and test information got buried deep inside with the help of lots of money.

n exchange for India Organix’s farm test reports and information, Vishnu asks Kamal to get him a job as a reporter. Kamal tells Vishnu that getting him a job is not in his hands. Vishnu being a good person still helps Kamal. Kamal sends India Organix’s farms test reports and information to Radha. Radha gives the same thing to Amina in print form. She finally convinces Amina to let Awaaz Bharati expose India Organix. At prime time news channels, Amina and Dipankar start with their breaking stories. Dipankar exposes Anurag Bhatia by proving his connection with Pakistan. Amina exposes India Organix by revealing that India Organix’s products have large amounts of chemical fertilizers and pesticides traces in them, according to Food Safety Division’s reports.

She also reveals to the public that India Organix sells less priced products bought from poor farmers/tribals at gold and silver prices in the cities. Amina says India Organix is an enemy of farmers, not friends as they claim in their taglines. Kedia calls Dipankar and angers him by asking him to take inspiration from Awaaz Bharati. On the other hand, Amina has drinks with Radha and Kamal. She addresses Radha and Kamal as her best reporters. This makes Radha and Kamal happy. Later, Amina sends Radha and Kamal out of her cabin by warning them to never ever doubt her and her channel’s integrity.

Amina’s threats and warning stuns Radha and Kamal. Dipankar calls Radha to meet him to help him as he also helped her last time. Radha agrees. Later Dipankar meets Arunima as decided. They have brutal arguments about Aahana’s custody. Dipankar leaves, refusing to give Aahana’s custody to Arunima and Xerxes (Arunima’s boyfriend). Radha indirectly scolds Juhi for not working on Sure Cure hospital’s story. Juhi gets tense. Radha meets Dipankar and agrees to help him with Anurag Bhatia’s story to return his favor. She refuses to join Josh 24/7, when Dipanka asks her to.

Amina relaxes a little, when Radhe Shyam doesn’t show any anger on her for exposing India Organix (Raghav’s company). Radha enters Sure Cure hospital. A person sees Radha’s images clicked by Manjula’s neighbor. He asks someone to get information on Radha and her motives. Someone follows Radha to the Sure Cure hospital.