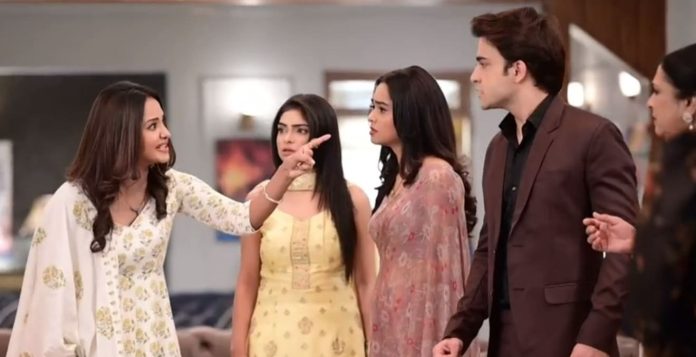 Prachi tells the family that Rhea had spiked Ranbir’s drink and took an advantage of him, he is innocent. Shahana taunts Rhea. Rhea raises hand on her, but Prachi stops Rhea. Dida asks Rhea did she lose her mind. Rhea angrily pushes Dida. Ranbir and Vikram hold Dida. Pallavi asks Rhea to leave the house, because she has crossed all the limits today. Rhea tells that she will come back home. Pallavi tells that she will return when she gets free from the jail. She ousts Rhea from the house. Tonight in the show, Pallavi tells Rhea that she will ask Prachi to leave from their house, but after nine months. She asks Rhea to divorce Ranbir today itself and leave the house. Aaliya tells Rhea that Pallavi would need to answer her now. She gets mad at Pallavi. She threatens to show her worst side to Kohlis. Rhea weeps sorrowfully.

Earlier in the show, Rhea tells Ranbir that Prachi doesn’t love him, she wants to leave him and go away forever, she is leaving the house in the morning, she heard Prachi talking to Shahana. Prachi overhears them. Ranbir tells that he wants to spend time with Prachi. He asks her to leave them alone. He doesn’t want Prachi to leave. He shuts the door on Rhea’s face. Prachi pretends to be sleeping. Ranbir refuses Rhea’s love. Rhea goes mad. She goes to Aaliya and tells that Ranbir refused her, he insulted her and ousted her. She cries for Ranbir. She tells that she will not keep the fake pregnancy, she is going to kill the unborn child.

Rhea swears to kill Ranbir’s unborn child. She grows mad in anger. Aaliya asks Rhea what is she saying, she isn’t pregnant with a real child. Rhea tells that just they know this secret, but the family doesn’t know it, the family thinks she is pregnant. She adds that she planned the fake pregnancy to get everyone’s attention, so that Prachi leaves the house, but Ranbir is going to stop Prachi, her fake pregnancy is of no use now. She gets fed up of Prachi’s leaving drama. She tells that Dida, Pallavi and Ranbir always stop Prachi from leaving. She doesn’t know if things will happen as she wants.

Aaliya asks her to tell this to Pallavi, then maybe it will help. Rhea tells that she will talk to Pallavi, and make her oust Prachi from the house. Prachi wakes up in the morning, and finds Ranbir sleeping on the floor, bedside, holding her hand. Ranbir wakes up when she gets up to sit. She apologizes for waking him up. He tells that he is totally fine. She tells that it would be uncomfortable for him. He tells that he got a good sleep, he was getting romantic dreams with her, his morning got good when he saw her face. He goes to freshen up. Shahana comes to meet Prachi. Prachi tells that she thought of leaving, but she has changed her mind because of Ranbir. She doesn’t think she should leave.

Aryan comes there and supports Ranbir. He tells that kiss is a gesture of love, kiss isn’t wrong, kiss doesn’t make anyone pregnant. He kisses Shahana and teases her. Shahana runs to beat him. Ranbir thinks how to express love to his wife. Pallavi follows Rhea. She asks her not to walk away when she is talking to her. She tells that she can’t bear her attitude. Rhea tells that Pallavi doesn’t care a bit for her. She doesn’t know what happened that Pallavi is ignoring her. She gets rude towards Pallavi. Pallavi asks her to talk to her well. Rhea tells that Pallavi is snatching her baby’s father.

Pallavi asks her to not say anything, else everything will get ruined. She wants Prachi to stay back. Rhea asks what about her. Pallavi asks Rhea to divorce Ranbir, so that Prachi stays back. She explains her plan. Rhea tells that she has no idea about her plan. Vikram asks Pallavi what is she planning. Pallavi tells that there is nothing special. Vikram and Dida question again. Pallavi lies that she was thinking to take Rhea and Prachi for shopping. Rhea thinks Pallavi is double crossing her. She leaves. Pallavi complains about Rhea’s kiddish behavior and goes. Dida feels Pallavi is lying to them.

Vikram also suspects the same. Rhea meets Prachi in the corridor. She accuses Prachi. Prachi recalls Ranbir and Rhea’s conversation. She answers Rhea, saying Ranbir was just of her since the start. Rhea blames her for snatching Ranbir. Prachi takes a stand for her husband. She tells that nobody can question her relation. Rhea reminds that Prachi was going to leave the house, which means Prachi had accepted that Ranbir is her/Rhea’s husband. Prachi tells that she is Ranbir’s legal wife, Ranbir and Rhea’s marriage is illegal. She reminds that Ranbir filled the Kumkum in her hairline. Rhea calls it a drama. Prachi calls Rhea’s marriage a drama, a big lie.

Reviewed Rating for Kumkum Bhagya 4th August 2022 Written Update New Ruckus: 5/5 There must be more of Pranbir moments in the show This rating is solely based on the opinion of the writer. You may post your own take on the show in the comment section below.