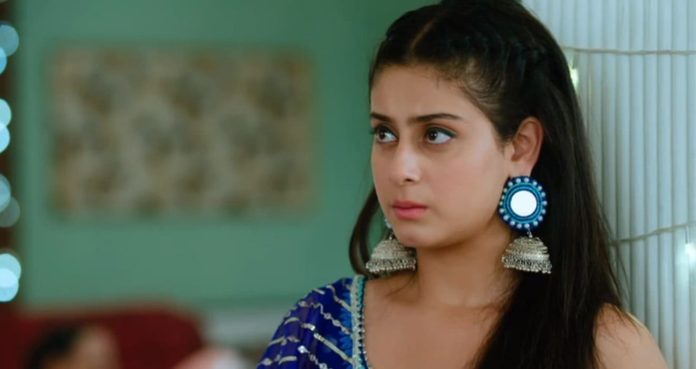 Udaariyaan 4th August 2022 Written Update Jasmin’s miscarriage Amanpreet reveals that he is Candy’s father. Jasmine wonders who this new person is. Amanpreet asks Simran to bring some sweets as she knows that he loves sweets. Simran recalls Amanpreet torturing her. Candy comes and asks Simran about some of his toys. Amanpreet says his and Candy’s face matches. He tries going near Candy but Simran covers Candy. She asks Candy to go inside. Amanpreet tries giving chocolates to Candy. Candy refuses saying that his mother has taught him to not take chocolates or anything from strangers.

Amanpreet tells Candy that his mother does many things with strangers. Amanpreet’s double meaning cheap words angers Fateh. Before he could touch Candy and reveal his true identity to him, Tejo comes in between. Angry Tejo asks Amanpreet to stay away from Candy. Tejo asks Mahi to take Candy inside. Mahi takes Candy inside with her. Jasmine wonders why her sister interferes in everyone’s matters. Amanpreet asks Simran to keep her sister-in-law in control as he is Candy’s father. Angry Fateh grabs Amanpreet’s collar and starts dragging him. Khushbeer, Tejo and Fateh’s grandfather stop Fateh.

Tejo asks Amanpreet why he recalled today after 5 years that he is Candy’s father. She asks him what happened in the past, when he promised to marry Simran and left her alone and pregnant. Tejo asks Amanpreet if he didn’t have rights and duties towards Candy in the past. She asks Amanpreet what right he wants Candy now. In a cheap tone, Amanpreet addresses Tejo as “beauty with brains”. He answers Tejo’s question to Simran alone. Fateh again attacks Amanpreet. Amanpreet laughs loudly and cheaply. Tejo, Khushbeer and Fateh’s grandfather again stops Fateh. Tejo asks Fateh to call the police as only they will teach Amanpreet a lesson.

Khushbeer says Tejo is right. He starts calling the police but a scared Simran stops him. She tells Khushbeer that Amanpreet has been following her, Candy, Virks and Buzzo since many days. Simran requests Khushbeer to not contact police, otherwise Amanpreet can trouble them or make them suffer some kind of loss. Amanpreet asks Khushbeer to call the police, so that whole Moga gets to know that his unmarried daughter ran away with a son in her womb. He tells Khushbir that his political career will get more ruined, when they will get to know what all Simran did. Amanpreet says his case will get stronger if police are called and Fateh will beat him.

Buzzo threatens to break Amanpreet’s face. Amanpreet asks Buzzo to see his and Candy’s DNA reports. Fateh and Tejo snatches and read the DNA reports. Tejo asks Amanpreet how they can believe that he is showing them the right/true reports. She asks Amanpreet how he got his and Candy’s DNA test done without any sample. Amanpreet tells everyone that he took Candy’s hair sample when Candy suddenly disappeared and everyone later found him eating chocolates outside the house. Angry Simran burts out and reveals that Amanpreet is Candy’s biological father. She says how it matters.

This shocks everyone. Simran says she accepts that she made a mistake. She says only she and Buzzo are Candy’s parents. Angry Simran asks Fateh to throw Amanpreet out of the house. She says that she doesn’t want Amanpreet’s shadow to cast over her child. Tejo asks Amanpreet how he will prove that Candy is his son. Tejo tears the DNA reports and asks Amanpreet to get lost. Amanpreet tells Tejo that he can get another copy of the same report and asks her what she will do then. Fateh grabs Amanpreet’s collar and asks him to get lost or otherwise he will break his face. Amanpreet asks Fateh and Buzzo to beat him as this way his case will become strong. Fateh and Buzzo together lift Amanpreet and throw him out. Amanpreet pushes Fateh and Buzzo inside and locks the door from outside.

Fateh and Buzzo try to go outside from another door but Simran stops them. She says Amanpreet is a monstrous man and can do anything. Simran blames her fate. Everyone asks Simran to not worry as they will handle Amanpreet. Fateh tells Buzzo that they need to launch a Fir. Simran says if they file any Fir against Amanpreet, he will take Candy away from her. Tejo tells Simran that Amanpreet won’t be able to take Candy with him. She tells Simran that Amanpreet just wanted to scare them. Tejo asks Simran to let Buzzo and Fateh go and file a complaint against Amanpreet. She says they even have to think about Candy’s safety.

Buzzo and Fateh leave to file a Fir against Amanpreet. Later, on call Fateh tells Tejo that they are waiting for SHO to help them file a Fir. Tejo and Fateh disconnect the call asking each other to take care of them and everyone. Jasmine overhears all this. She thinks that now Fateh’s focus will go away from her. Jasmine asks Tejo to prepare fritters and tamarind chutney for her as she feels like eating something condimental. Tejo says okay and leaves. Jasmine thinks that Tejo never leaves her innocence and understands her (Jasmine) evilness.

Later, Tejo is seen talking to Satti over the phone. Tejo tells Satti that Jasmine asked her to prepare fritters and tamarind chutney for her. She says she is making paneer bhurji for Jasmine as she suffers acidity frequently. Satti asks Tejo if Jasmine is living properly at Virk house. Tejo tells Satti that Jasmine is living properly. She disconnects the calls seeing Simran walking inside the kitchen. Simran starts cutting coriander to distract herself. She still keeps distracted recalling the drama Amanpreet caused earlier. Due to being distracted, Simran cuts her finger. Tejo applies ice on Simran’s injured finger.

Tense Simran leaves the kitchen. Jasmine comes inside the kitchen and asks Tejo for fritter. Tejo tells Jasmine that she prepared paneer bhurji for her as she keeps suffering from acidity. She hands over a bhurji plate to Jasmine and leaves from the kitchen. Jasmine feels irritated thinking that Tejo and Gurpreet will kill her by making her eat healthy. At the same time, Jasmine receives her old friend, Nikki’s call. Nikki reminds Jasmine that she married a Germany settled guy. She tells Jasmine that she has arrived in Punjab. Nikki invites Jasmine to her party. Jasmine assures Nikki that she will surely attend her party. They disconnects call saying bye to each other.

Jasmine thinks at the party, she will get good food to eat. She decides to convince someone to let her go and attend the party. Later, Fateh and Buzzo return to Virk house. They tell everyone that they got an Fir registered against Amanpreet and police have said that they will soon take Amanpreet in their custody. Buzzo asks Simran to not feel tense as they are with her. Khushbeer says if needed he will take his political party’s help. Simran says she knows Amanpreet very well. She says that Amanpreet does every bad thing like drinking alcohol and gambling. Simran says Amanpreet goes to bad women too.

She says she got blind in Amanpreet’s love and did everything he asked her to do. Simran says Amanpreet revealed his real evil face after reaching Canada. She reveals to everyone how Amanpreet asked her to let his guests and friend touch her inappropriately. Simran says that Amanpreet also asked her to keep his friends and guests happy. Tejo asks Simran why she suffered so much and didn’t tell Khushbeer or Fateh. Simran tells Tejo that she was an unmarried mother and got punished for her mistakes. She says that she never wanted to involve or drag her family in her punishment. Simran says she didn’t even have any money to return to India.

She reveals to her family that she used to beg Amanpreet for daily food. Simran says Amanpreet even lost her gold bangles in gambling. She reveals that she had no option left with her and thus used to eat food from Gurudwara. Simran tells her family that Amanpreet daily used to beat her brutally when she told him that she wants to return to her home in India. She says she had no words to express how much pain Amanpreet used to give her while brutally beating her. Simran reveals that someone helped her and then she started teaching students online. She says she collected money by taking daily online classes from which she bought the ticket to India.

Simran says she is very scared of Amanpreet as he is a criminal. Tejo tells Simran that she doesn’t need to be scared. She also tells Simran that she is a very strong woman, otherwise many women keep suffering all this. Tejo says she can’t understand why girls dream of going abroad as no one knows what happens with those girls abroad. Simran says she couldn’t have killed her child because she is a mother at the end of the day. She says ran away because she didn’t want her child to be raised with a criminal like Amanpreet. Simran says Amanpreet can’t ever love anyone. She says that she feels that Amanpreet has not come for Candy from Canada and has some other evil motive.

Tejo tells Simran that Amanpreet can’t do anything or snatch Candy from her and Buzzo as they are Candy’s parents. She asks Simran to just take care of her and Candy. Fateh asks Simran to not feel worried as police will soon catch and arrest Amanpreet. He tells Simran that till Amanpreet gets arrested, he will be with her each and every moment. Fateh hugs Simran. He thinks that his family are facing two evil people at the same time, Jasmine and Amanpreet.

In the next episode, Jasmine will attend Nikki’s party fooling Virks. Tejo will tell Fateh that she is feeling worried about Jasmine as she isn’t picking up her call. Outside Party Venue, Jasmine will be seen in immense pain. Jasmine’s friend will take ill Jasmine to the hospital. Doctor will tell Jasmine that she suffered a miscarriage because of heavy internal bleeding. Jasmine and her friends will be shocked hearing this.