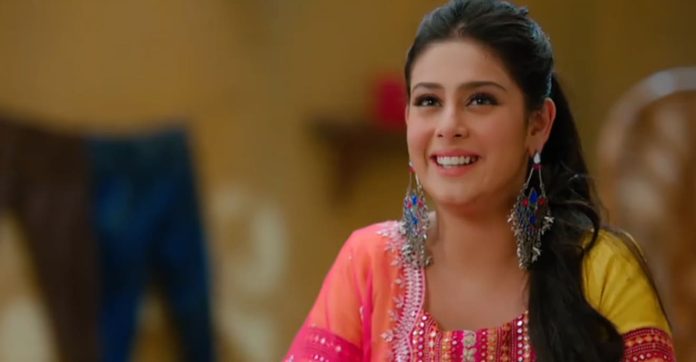 Udaariyaan Upcoming Jasmin departs 8th August 2022 Amanpreet reaches Virk house with police in an injured condition. He keeps on accusing Simran of beating him. Simran and her family try defending herself. Amanpreet says Simran even tried killing him by adding poison in his food. He says Simran has been beating him for years. Fateh gets angry and attacks Amanpreet. Tejo and Khushbeer stop Fateh. Tejo and Fateh tell the inspector that they have already filed an FIR against Amanpreet. Police inspector shows the FIR filed by Amanpreet against Simran to Fateh and Tejo. Inspector tells Virks that Amanpreet filed the FIR against Simran just 5 minutes before they filed an FIR against him. This shocks Virks.

Amanpreet starts showing fake wounds from inside his shirt to police. This stuns everyone. Tejo asks the inspector how a woman will beat a tough man. Amanpreet asks the police to see how fit and tough woman Simran looks. He says Simran only beat him and her family helped her. Amanpreet again starts showing his fake wounds to gain sympathy. He sees a bandage on Simran’s finger and uses it to his advantage. Amanpreet asks the inspector to see that Simran herself got wounded while beating him. He says that he still cares for Simran.

Tejo tries telling the police inspector that Simran’s finger got cut because of cutting vegetables. But Amanpreet doesn’t let Tejo complete her sentence. Amanpreet tells the inspector that Simran daily beats him brutally like someone cuts vegetables. Police don’t hear anything more from Virks and arrest Simran. They start dragging Simran away from her family. Candy sees this and starts crying. He runs to Simran and hugs her. Candy asks the inspector where they are taking his mother. Amanpreet asks the inspector to not trust Simran. He says Simran will deceive law by using her child as her shield.

Fateh gets angry and again attacks Amanpreet. His family stops him from doing so. Tejo asks Fateh to not attack Amanpreet in front of police as it can increase Simran’s difficulties. Inspector angrily asks Fateh to control himself otherwise he can also get arrested because of his behavior. Tejo apologizes to the inspector on the behalf of Fateh. She tells the inspector that Fateh’s anger is justified as his sister is getting arrested on a fake allegation. Tejo requests the inspector to arrest Simran after properly investigating the matter. Inspector angrily asks Tejo to not explain to him how to do his work.

Candy makes Tejo leave him and runs to Simran. Seeing Candy’s condition, Simran tries to calm Candy. Simran tells Candy that she will return in the evening. Police finally take Simran away. Fateh, Buzzo and Khushbeer follow the police’s car. Candy keeps on crying for his mother. Amanpreet smiles evilly and cheaply. Candy cries hugging Tejo. Amanpreet comes closer to Tejo and talks to her cheaply. He asks Tejo to give Candy to him if she can’t handle him. Fateh’s grandfather gets angry and asks Amanpreet to stay away and talk from a distance.

Amanpreet talks cheaply, insolently and rudely to Fateh’s grandfather too. He tries going near Candy but Gurpreet and Tejo stop him. Amanpreet tells Candy that his mother is bad and thus the police took her with them. He also tells Candy that even Tejo is bad. Gurpreet asks Amanpreet to shut his mouth. Amanpreet behaves cheaply with Gurpreet too. He laughs loudly and evilly. Amanpreet says Candy is his child and thus he has full rights over Candy. He says he will anyhow take Candy with him. Tejo reminds Amanpreet that he lived without Candy for 5 years. She asks Amanpreet to live without Candy and not ruin Simran and innocent Candy’s life.

Tejo tells Amanpreet that he can’t take Candy away in their presence. Amanpreet threatens Tejo by telling her that his plan is solid. He eyes Tejo cheaply and evilly. Gurpreet addresses Amanpreet as insolent. Tejo asks Amanpreet to stay away from Candy. Amanpreet cheaply asks Tejo whom he can go closer to, if not Candy. When Amanpreet tries touching Candy, Candy pushes away Amanpreet’s hand angrily. Amanpreet accuses Simran’s upbringing. He says Simran taught Candy to be scared of his own father. Tejo pushes Amanpreet away, when he again tries to go closer to Candy.

Amanpreet asks Candy to not be scared of him as his wounds are fake. He takes out the fake wounds, which shocks Virks. Tejo doesn’t let Amanpreet go near Candy. Amanpreet wards off the evil sight from Tejo saying, “Buri Nazar Wale Tera Muh Kaala”. Tejo asks Amanpreet to leave as he did what he came to do. She tells Amanpreet that no one here wants to see his sinister face anymore. Amanpreet threatens Tejo that he will return and soon take Candy away with him. He also threatens Tejo by telling her that this matter will go on for a longer time. Amanpreet leaves with a villainous and evil smile.

On the other hand, Jasmine cries recalling herself falling down from stairs. She also recalls doctor telling her that she had a miscarriage. Jasmine wipes her tears and starts getting up from her hospital bed. Doctor comes and asks Jasmine to be careful as now her body needs both mental and physical rest. She asks Dimple (Jasmine’s friend) about Jasmine’s husband. Jasmine gets angry and tells the doctor that everyone died at her home. She talks very rudely with the doctor. Jasmine rudely asks the doctor to just tell her if she can go home or not. Doctor says okay and forwards the medicine prescription to Jasmine Jasmine snatches the prescription from the doctor and leaves.

At Virk house, Tejo tries calming down a tense Candy. Gurpreet calls Khushbeer to get Simran back home as soon as possible. Khushbeer asks Gurpreet to not worry as Fateh and Buzzo are with Simran in the police station only. He tells Gurpreet that he is trying to call and get help from some people and disconnects the call. Candy says he wants his mother right now. He also says that bad and evil Amanpreet is not his father. Tejo calms Candy. Candy asks Tejo to promise him that she will soon bring his mother back home. Tejo promises Candy the same. Mahi takes Candy inside.

At the police station, Simran requests Buzzo to be with Candy. Fateh tells Simran that many family members are with Candy and are taking care of him. He promises Simran that he won’t let her stay in prison for much time. Outside the hospital, Jasmine recalls Fateh telling her that she will give birth to her child at Virk house, who will be raised up at Virk house only. She also recalls Tejo caring much for her and her baby. Jasmine further recalls Gurpreet asking her to be careful and take care of her child. She also recalls that she decided to use her unborn child to return to Fateh’s life and to get him for her.

Dimple further tells Jasmine if Tejo will reach her house, then she will get to know about last night’s party. She tells Jasmine that her mother knows that they were at Nikki’s party last night. Irritated Jasmine picks up Tejo’s call. Tejo tells Jasmine that police arrested Simran and Gurpreet is worried about both her and Simran. She asks Jasmine to return home soon and reduce Gurpreet’s tension about her at least. Jasmine says okay and disconnects the call. Later, Rupy gets to know about Simran’s arrest. Rupy tells Khushbeer that it means Amanpreet’s reach and contacts are higher.

Tejo tells the family that Simran told that Amanpreet is a criminal minded person and can go to any extent. Fateh and Buzzo return home. They tell the family that they failed to get Simran bailed out. Buzzo says now Simran can get bail on Monday only as Saturday and Sunday the court will be closed. Gurpreet angrily asks how her daughter will stay in prison for 2 days. Fateh says he and Buzzo tried convincing the judge but he didn’t pay any heed and asked them to come on Monday. On Rupy’s question, Fateh tells him that the Judge’s name is Trilochan Singh.

Buzzo says Amanpreet intentionally did all this on Friday, so that they won’t be able to get bail for Simran. Khushbeer requests Rupy to do something. Rupy says he knows Judge’s brother and is calling him. Buzzo blames himself for all the mess. Fateh tries handling a disheartened Buzzo. Rupy says he talked to Judge’s brother and he is ready to meet them. Fateh, Tejo and Khushbeer leave with Rupy to meet Judge’s brother. Buzzo stays at home for Candy. Mahi and Gurpreet leave to meet Simran. On the other hand, Amanpreet drinks with his evil and cheap friends. Amanpreet celebrates his victory and success of his plan against Simran and Virks.

In the next episode, Jasmine will tell Dimple that she can’t let Virks insult or make fun of her. She will also tell Dimple that she can’t even let Virks send her to prison and thus she is leaving for Amritsar. On the other hand, Fateh will tell Tejo that now everything is fine. Tejo will tell Fateh that this silence is what comes before the storm. Fateh and Tejo will get romantic in between the road in the rain. Amanpreet will come and anger Fateh with his cheap words. Tejo will calm Fateh and tell Amanpreet that she won’t let Fateh do anything wrong.

Reviewed Rating for Udaariyaan Upcoming Jasmin departs 8th August 2022: 3/5 This rating is solely based on the opinion of the writer. You may post your own take on the show in the comment section below.