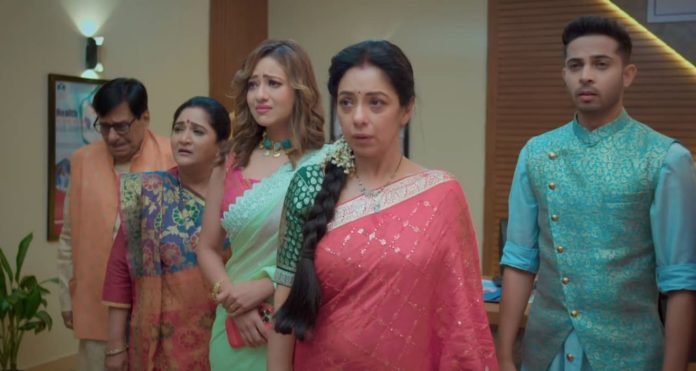 Anupama Vanraj Anuj accident 9th August 2022 Update Ankush finds Anuj going somewhere. He gets confused and talks on call with someone. Anuj signs Anupama that he will return soon, gives her a flying kiss and leaves. Tense Anupama prays to God to take care. As Anupama leaves, the kalava that she and Anuj tied over the temple bell, falls down, getting untied. It signs towards an untoward incident. Ankush angrily sees Anuj leaving. Kavya hears Anuj sending a voice note to Vanraj, saying that he is coming. She recalls Vanraj’s last night statement and anger towards Anuj.

Kavya starts feeling tense. Anupama and the rest of the family members start performing aarti. Adhik and Pakhi give secret smiles to each other. Anuj meets Vanraj and sits in his car. Both of them wear seatbelts. Kavya gets worried seeing Anuj and Vanraj going somewhere in Vanraj’s car. Vanraj keeps driving very fast. Anuj doesn’t show any fear to Vanraj. This increases Vanraj’s anger. Kavya is seej following Anuj and Vanraj’s car. Aarti ends but Anupama keeps on twirling the aarti diyas. This stuns everyone. Everyone tries to stop a tense Anupama by telling her that aarti has ended.

Anupama stops and opens her eyes when she hears her phone ringing. Seeing an unknown number displaying tense Anupama asks Samar to pick up the call. Samar receives the call and the person on the other side of the call introduces himself as Inspector Dheeraj Tiwari. Everyone gets shocked when Inspector Dheeraj informs that two people sitting in Anuj’s car met with a big accident and fell off the cliff. Inspector says the two people who were sitting in Anuj’s car are badly injured and chances of their life safety are very less. Everyone gets shocked and tense. Adhik and Ankush give each other a look.

Anupama falls down on her knees in tension. Tense, Anupama drives fastly with Ankush and Samar sitting in her car. Anupama recalls Anuj and her last night’s conversation and holiday plans. She also recalls Anuj telling her that he is going to meet Vanraj. On the other hand, Kavya is seen standing tense and crying near the cliff. Anupama, Samar and Ankush also reach there. Anupama runs barefoot towards the cliff. Ankush gets shocked seeing Kavya already present at the accident spot. Anupama stands much near to the cliff and screams Anuj’s name.

He says Kavya wasn’t able to call families, which is why police called them. Everyone asks Kavya how Anuj and Vanraj fell off the cliff. Kavya keeps on crying and covers her ears. Ankush wonders why Adhik is not picking up his calls. He recalls Adhik suddenly going somewhere from the temple. Before Kavya could tell anything to anyone, two ambulances arrive at the accident spot. Police inform inspector Dheeraj that they are bringing both men. At Shah house, Kinjal tries calming a tense Pakhi. Crying Pakhi hugs Kinjal. Pakhi keeps on getting negative thoughts. Kinjal asks Pakhi to not think negatively.

Mamaji asks Pakhi to calm down and keep belief in God. He says good news might be on the way. Kinjal asks Mamaji about Anu. Mamaji says Anu is with Dolly. Pakhi asks why no one called from the accident spot. Kinjal tells Mamaji that she is feeling scared even in breathing. At the accident spot, both Anupama and Kavya are seen very scared. Everyone gets shocked seeing many people bringing two bodies who are wearing clothes similar to Anuj and Vanraj. Anupama and Kavya run towards the bodies. Other family members run behind Anupama and Kavya.

Dolly says Anu is very tense about the situation. She says it was very difficult to explain to Anu that everything is fine. Dolly says how to handle and tells such a little kid that her father. Before Dolly could say anything further, everyone witnesses that Anu is praying to God for Vanraj and Anuj’s safety. Kinjal worriedly says that Anu might have heard the elders’ conversation. Anu tells God that she doesn’t need chocolates and toys but just wants her father fine. She prays to God for Vanraj and Anuj’s safety. Little Anu’s innocence and maturity stuns everyone. Everyone gets teary eyed.

Pakhi goes to Anu and hugs her. Anu asks Pakhi if their fathers will get fine or not. Pakhi tells Anu that nothing will happen to their fathers. Anu asks Pakhi if she will be an orphan again. Anu’s words shocks Kinjal, Dolly, Pakhi and Mamaji. Pakhi signs in “no” and hugs Anu. Kinjal receives another text from Paritosh. She tells everyone that Paritosh texted that everyone took Vanraj and Anuj to the hospital. Everyone from the accident spot reaches the hospital in tension. At the hospital reception, Anupama and Kavya ask about Anuj and Vanraj. Receptionist says Vanraj and Anuj’s condition was very critical and thus are taken to emergency.

She also tells both families that no one is allowed to see patients admitted in emergency. Receptionist asks both families to wait outside as the doctor will come and update them about both patients’ conditions in some time. “Mann Bharryaa 2.0”, again starts playing in the background. Everyone looks at the emergency room in tension. Everyone feels it is difficult to wait for the doctor’s reply on Vanraj and Anuj’s condition.

In the next episode, everyone will be seen asking Kavya again about what happened between Anuj and Vanraj at the accident spot. Kavya gets flashes of seeing Anuj and Vanraj shaking hands with each other at the accident spot/cliff. Before Kavya can tell anything to anyone, a female medic comes running. The female medic tells the nurse that a lot of staff is needed for the emergency room as the case is very critical. This shocks Shahs and Kapadias. Anuj and Vanraj will be seen getting treated by a lot of medical staff.

Reviewed Rating for Anupama Vanraj Anuj accident 9th August 2022 Update: 3/5 This rating is solely based on the opinion of the writer. You may post your own take on the show in the comment section below.