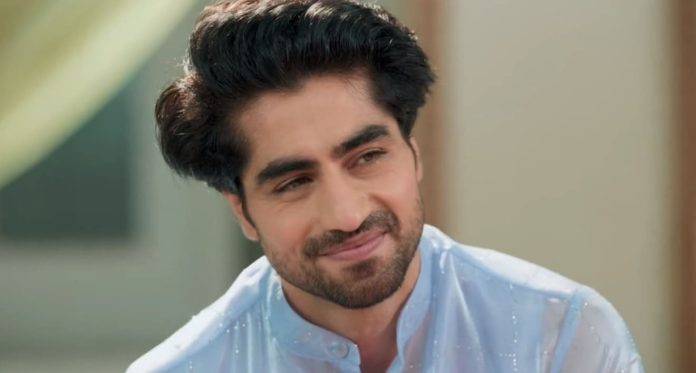 She reminds Anisha that her family is living nearby only. Mahima tells Anisha that if she won’t let down Suhasini in the future, then even she will get along and fine with her. Abhimanyu asks Anisha to not take tension, saying that he knows that Kairav is a very nice guy and will take proper care of her. Anisha cries while hugging Abhimanyu. Abhimanyu tells Anisha that he sometimes knowingly- unknowingly hurts Akshara, but Kairav won’t hurt her (Anisha) ever. On the other hand, Akshara cleans Kairav’s specs. Kairav apologizes to Akshara for giving her his tension when she is already worried about Abhimanyu’s hand.

Akshara hugs Kairav and asks him to not apologize to her. She apologizes to Kairav for not being able to help him in the difficult situation he is in. Kairav tells Akshara that he can’t tolerate how badly Anisha cheated him. He says Anisha will have to accept her deception in front of everyone. Akshara asks Kairav to calm down and not make any decision in haste. Kairav explains to Akshara that in some situations if immediate decisions aren’t made, then the situation worsens. Akshara tells Kairav that she understands his situation but can’t help him at present. She tells Kairav that Dr. Kunal has instructed her to not give any stress to Abhimanyu, till his surgery gets completed.

Akshara tells Kairav that she is thinking of some way by which his (Kairav) pain can also subside and even Abhimanyu should not be harmed either. Kairav leaves angrily. Akshara runs behind him but gets stuck on the way. She again starts running behind Kairav and reaches Birla house’s living area. She gets shocked seeing Kairav and Abhimanyu holding each other’s collar in anger. The whole family is in shock. Suddenly, Akshara’s phone rings. The scene in front of her changes and she comes out of a scary imagination. Everyone else seems happy, while Kairav seems angry.

Mahima tells Suhasini that they will send the wedding day’s clothes for Goenkas as they gave Birlas at Abhimanyu and Akshara’s wedding. Suhasini asks Mahima to just get Groom’s clothes made by Kairav’s choice. She says the rest they will handle. Suhasini tells Mahima that they will get the bride’s (Anisha’s) wedding outfit made by their choice. This irks Mahima but she remains silent. Kairav announces that he wants to say something to everyone. Abhimanyu asks Kairav if he is also getting cold feet like Anisha. Kairav feels very angry. Abhimanyu asks Akshara to handle her brother just like he is handling his sister. He notices anger in Kairav’s eyes.

Abhimanyu asks Akshara if she has any idea what has happened. Mahima asks Kairav if something happened between him and Anisha. Kairav apologizes and says that he has to leave for some urgent work. Abhimanyu says he got very scared. Kairav. Kairav says he has to go to the factory for some workers’ issues. He leaves after staring angrily at Anisha. Akshara feels guilty for not being able to help her brother. Anisha goes behind Kairav. Kairav angrily tells Anisha that he wouldn’t have been alive if he would have gotten married to her.

He also tells Anisha that now their marriage won’t take place. Kairav asks Anisha to tell the truth to her family herself. Anisha tries explaining herself but Kairav stops her. He asks Anisha why she is feeling scared about telling her truth to the family when she didn’t feel scared while actually having an affair. Kairav leaves telling Anisha that no ritual will take place after this. Akshara overhears Anisha and Kairav’s conversation. She goes to Anisha and tells her that truth can’t be hidden for long. Akshara asks Anisha to tell the truth to both families herself and not ruin other relations between both families.

Abhimanyu finds Anisha and Akshara standing together. Akshara relaxes Abhimanyu by smiling. Shefali on the other hand congratulates Mahima, saying that now Anisha will get settled properly and her biggest tension will end. Mahima tells Shefali that after seeing Anisha crying profusely and how suddenly Kairav left angrily, she is suspecting that something wrong happened between Kairav and Anisha. Shefali tells Mahima that it can be a normal couple fight between Anisha and Kairav. Mahima says she just wants Anisha to get married properly.

On the other hand, Kunal gets worried for his sister Maaya after receiving a voice note from her. Through the voice note, Maaya tells Kunal that she doesn’t want to live anymore. She also tells Kunal that he did much for her but her fate was bad. Maaya further tells Kunal that he isn’t at fault for all this. Worried, Kunal tries calling Maaya but she doesn’t pick up. Kunal thinks that this is why he doesn’t leave Maaya alone. He called the travel desk to book his ticket for Pondicherry. Kunal gets angry, knowing that no ticket is available. He angrily asks the Travel desk to book a charter flight as he has to reach Pondicherry anyhow.

He picks up his bag and leaves in haste. On the other hand, Abhimanyu shares his wishes about Anisha’s marriage with Akshara. Suddenly, Abhira finds a crowd in front of their car. Abhira comes out of the car and finds a mother crying for her ill child. Abhimanyu checks the kid, who is unable to breathe. Akshara says they should take the kid to the hospital immediately. Abhimanyu tells Akshara that they have not that much time left with them. He says they will have to immediately give treatment to the kid on the spot. Akshara notices that Abhimanyu’s injured hand is paining a lot while treating the kid.

Abhimanyu angrily says that he has become useless now. He tells Akshara that the kid could have died if she wouldn’t have been with him. Abhimanyu says that he couldn’t have ever forgiven himself if something would have happened to the kid. He says that if his hand is not fine then his education, thinking, experience, etc. everything is useless. Akshara tells Abhimanyu that it’s not like that. Abhimanyu asks Akshara to think if any one of their family members would have been in place of the kid. He again asks Akshara to think if something happens to any member of their family in his presence, what he will do.

Akshara asks Abhimanyu why she will ever leave him. She promises Abhimanyu that she will never ever leave him. Abhimanyu asks Akshara to promise him that she will go for her audition if his surgery and her audition will take place on the same day. Akshara promises Abhimanyu that she will do whatever she can do for both of them. He hugs Akshara and tries to think positively. Akshara and Abhimanyu walk toward their car. Akshara feels that something wrong has happened with her feet. At Birla house, Anand receives Dr. Kunal’s call. Dr. Kunal tells Anand that he has to postpone Abhimanyu’s hand surgery for now as he has to leave for somewhere urgently.

Anand asks Dr. Kunal how he can do this with them even knowing that Abhimanyu’s hand surgery is so important for Birlas. Dr. Kunal requests Anand to understand that he needs to reach somewhere urgently. Abhimanyu and Akshara reach home and overhears everything. Abhimanyu asks Dr. Kunal what about his hand’s surgery. Dr. Kunal promises Abhimanyu that he will return and perform his surgery. He apologizes to Abhimanyu and disconnects the call. Everyone at Birla house gets shocked and worried. Abhimanyu breaks down from inside and pretends to be fine in front of his family. He asks his family to not be worried, saying that his surgery will take place for sure.

Tense Abhimanyu runs to his room. He tries to calm himself, thinking that Dr. Kunal and God would have postponed his surgery by thinking about something. Abhimanyu thinks that he doesn’t need to worry as his whole family and God is with him. Akshara receives Kairav’s text asking her to remind Anisha to reveal her truth to the family herself so that the wedding could get canceled without any drama. Akshara gets worried. She thinks that if she will think about her brother, then Abhimanyu will get hurt and if she will think about Abhimanyu’s health, then she will do wrong to Kairav. She wonders how to handle this situation and complains to God for putting her into a difficult situation or dilemma.

In the next episode, Kairav will angrily stand up in between his Mehendi ceremony. He will say that he doesn’t want to marry Anisha. This will shock both families and tense Akshara. Kairav will walk away from the Birla house. Anisha will run behind Kairav. Later, Abhimanyu will receive a call, which will shock him badly. He will tell both families that Kairav is taking Anisha to the hospital. This will shock and tense everyone.

Reviewed Rating for Yeh Rishta 12th August 2022 Written Update Dejected Abhi: 3/5 This rating is solely based on the opinion of the writer. You may post your own take on the show in the comment section below.