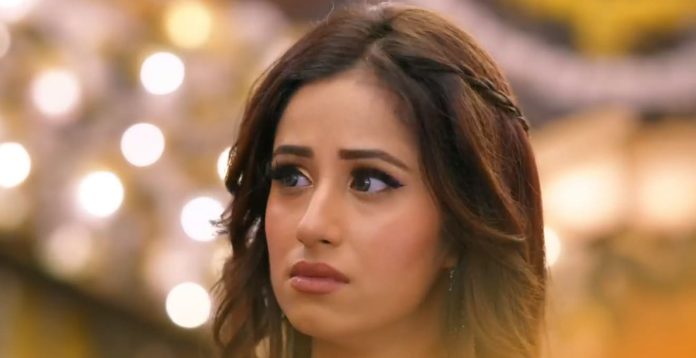 Bhagya Lakshmi 17th August 2022 Written Update Malishka’s plan Malishka doesn’t want Lakshmi to win. Ayush keeps an eye on Malishka. Rishi reaches Bangalore for the conference. He wishes Lakshmi handles the hotel event. He makes a video call to Lakshmi. She asks him if he has reached safely. He tells that she didn’t call him once. She tells that she wanted to call him, but Ayush engaged her in work, she was missing him a lot, she has made the food by taking his name. Rishi tells that he is in tension, because of her. She asks him not to worry, she will handle it well. He asks her to handle things well, its about their reputation.

Malishka overhears their conversation. Lakshmi tells her plan to Rishi to impress the critics. Rishi laughs hearing her silly plan. Lakshmi makes Rishi smile. She relieves his tension and asks him to trust her. He tells that he trusts her more than he trusts own self. She tells that she will handle the event well, his name will go to new heights. He tells that he called her, now he believes it more on hearing the thing he wanted to, nothing can go wrong when she is with him. Keep reading for the update.

Rishi tells Lakshmi that they shall have a party for their success when he returns home. He thanks her. Malishka hears them and gets angry. She wishes that something happens, Lakshmi ruins Rishi’s name and then she can’t face him. Lakshmi asks Rishi to handle the conference well. She wishes him all the best. He also wishes her. Rishi feels better, confident and motivated. He wants to take a good news home because of Lakshmi. Lakshmi makes the food. Malishka also praises the food. Lkshmi goes to the other chefs to check the food. Malishka adds some spices in the food. Ayush comes and sees Malishka adding something in the food. He yells at her for spoiling Lakshmi’s name, for doing such a disgusting thing.

Malishka wants to separate Rishi and Lakshmi. She wants Rishi to see her love and come back to her. She tells that she won’t let Lakshmi win today, she will make Lakshmi ruin the respect of Oberoi family. She wants Rishi to throw out Lakshmi. Balwinder tells Guddu that he is into big trouble just because of Lakshmi. He gets Malishka’s call. He doesn’t want to talk to her. She tells that she will kill him if he doesn’t answer. He answers the call. She tells him that she didn’t call to get him arrested, she called to offer a deal. He asks her what is her plan, what does she want to do.

She asks him to reach Rishi’s hotel. She calls him an idiot. He asks her to never call him an idiot, else he will kill her. He tells that he will not murder Lakshmi, he will not think of harming her. She asks him to not kill Lakshmi, but hurt her in another way. She tells her plan. He agrees to do her task. She tells that Ayush will just keep an eye on her, Balwinder will be safe to execute the plan. He threatens her, asking her to save him if he gets caught.

Ayush sees Malishka on call and asks her who was she talking to, was she calling someone at the hotel. She asks him not to accuse her, she is his friend, who he used to trust so much. He asks her to leave and give him some peace. She asks him to stop the nonsense. She tells that Neelam has sent her to check if Lakshmi makes any mistake. He tells that Lakshmi can never make any mistake, she is capable to rectify others’ mistakes. She asks him to call Neelam and tell her that he wants Malishka to leave. Ayush asks her not to use Neelam’s name. He gives her a chance to make a mistake, so that he catches her and exposes her. He asks her to do whatever she wishes to do. She asks if he will blame her for Lakshmi’s mistakes. He tells that Lakshmi can’t make any mistake. She asks him not to blame her again, she isn’t wrong.

Reviewed Rating for Bhagya Lakshmi 17th August 2022 Written Update Malishka’s plan: 3/5 This rating is solely based on the opinion of the writer. You may post your own take on the show in the comment section below.