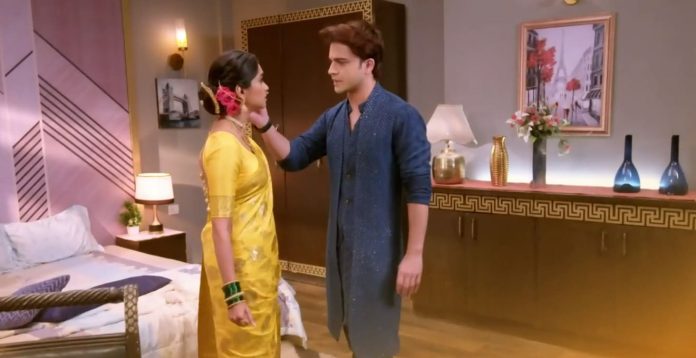 Kumkum Bhagya 6th September 2022 Written Update Mad Ranbir Ranbir and Prachi have an emotional talk, but he begins to lack true feelings of love and faith. He tells her that she must have told him about her pregnancy, that she is carrying Sid’s child. He tells that if she had told the truth about her pregnancy, then he would have forgiven her for her affair with Sid, and accepted her back happily, he would have even accepted her baby by all his heart. She is deeply shaken by his words, and realizes that he doesn’t trust her, he learnt to love her, but unfortunately didn’t learn to trust her. Prachi has her eyes filled with tears. She can’t believe that Ranbir has finally given her an answer that he has no faith on her love and fidelity.

Meanwhile, Sid tries to tell the truth to Ranbir. Rhea and Aaliya take him to the room. They threaten him and ask him to marry Prachi. Sid asks them to think from heart at least once, and stop using their evil mind. He shouts and asks them to stop planning and plotting to ruin others. Pallavi reaches there and is shocked to see Sid venting his anger on Rhea. While Pallavi is confused with the sight, Aaliya surely knows to cover it up. How long will Sid stay silent? Will he break his silence in the marriage altar? Keep reading.

Earlier in the show, Rahul and his friends enter the Kohli house. He gets scared seeing Priya. Priya tells that she wishes they don’t get caught. She helps them and gives them details of the family members. They decide to take a disguise and enter the function. Prachi walks lost. She gets saved from getting hurt when a decoration piece falls down. She goes to fix the decoration. Ranbir cares for her so that she doesn’t get hurt. She looks at him angrily.

Ranbir asks Prachi to come down, its not safe for her. Prachi asks him to tell her, what’s safe for her and what not, because he is taking her life’s decision, he is deciding everything for her, and she has to listen to him. He tells that she should have listened to him before, if she had trusted him, then this would have not happened with them. He tells her that she separated her life from him, so her life’s decisions will be taken now. He goes away to his room and cries profusely. Prachi follows him to his room. She finds him crying. She asks him what is he doing, why did he say that she has done wrong.

He tells that he asked her to trust him and come with him to make a new world. He asks why didn’t she trust him. She asks why should she trust him always, why doesn’t he trust her, she had to leave the house because of his loss of faith. She asks how can he expect this from her. She asks why is he talking of the past. He tells that she should have trusted him once and told about her pregnancy, if she told him the truth of her pregnancy, then he would have accepted her and her baby by all his heart, he would have stayed with them and gave them much love. She asks him if he feels that Sid has fathered her child.

He tells that he is professing his love for her, nobody can love anyone to this extent. Sid overhears the ladies gossiping about Prachi’s baby. He goes to talk to Pallavi urgently. She tells that she is talking to the pandit to fix the marriage mahurat. He asks her to hear him out once. Aaliya takes him aside for a talk. Rhea wants Sid to understand that they are really dangerous. Prachi tells that Ranbir can never love her. Ranbir claims that he loves Prachi, he will always love her.

He tells her that his heart and mind don’t listen to him, it means he loves her immensely, his heart will always beat for her, his love will never get less, his feelings, sight and intentions will change. He tells that he will be there to help her, but not support her. Prachi tells that its easy for him to say these words, but its hurting her. He asks her to take it as a bitter medicine. He wants to help her. He tells her that he wants to save her from tumbling down in every phase of her life. She tells that he can’t decide who she will love and marry. He tells that she has snatched all the rights and responsibilities from him. He adds that he isn’t deciding anything for her, he is just guiding her.

He asks her not to snatch his right to advise her. Prachi cries emotionally. Moreover, Aaliya threatens Sid. He tells that he didn’t know things will turn out this way, he knew relations will break, but he wasn’t prepared to make new relations. He doesn’t want to marry Prachi. He tells that he will expose everyone, he won’t let the family get ruined. Rhea arrives there and pushes Sid on the floor. She threatens him with a knife. Pallavi heads to Aaliya’s room. Rhea tells that she can cut Sid’s wrist, he may die, everyone will assume that he has committed a suicide. Sid tells that he has deep regret that his sister’s life is in danger, Ranbir and Prachi’s lives also got ruined. He asks Rhea to stop her game.

Rhea tells that she loves Ranbir a lot, she is mad for him, she wants to win him at any cost. Sid asks her to win Ranbir with love. He asks her to stop ruining people’s lives. Aaliya asks him not to attempt to become any Gyaani Mahatma. Sid sees Pallavi at the door and tells that they both have caught his sister. Aaliya and Rhea change the topic and act in front of Pallavi. Aaliya threatens Sid again. Sid gets silent. Pallavi asks them to just come and help her in the work. She takes Sid along with her. Prachi calls out Ranbir and stops him. He doesn’t want to stop and listen to her this time.

Prachi tells him that he knows her question. He tells that she knows the answer them. She wants to know if he wants her to marry Sid. He doesn’t want her to marry Sid, but thinks its right for her. Prachi cries that he left from her heart, its really aching. He tells that her heart is aching, and his soul is aching. Rhea tells Aaliya that they will kidnap Sid and make him away. Aaliya asks her how can she think this, when Sid will get married to Prachi soon. She asks her to believe Pallavi, once Sid and Prachi get married, then Ranbir and Prachi will never unite. Rhea tells that Sid can do anything before the marriage. Aaliya tells that they have Sid’s sister in their clutches.

Rhea scolds the servants who has come in disguise to steal Aaliya’s jewellery. Aaliya apologizes to Rhea for hurting her. She tells that she will always handle things. Rhea hugs Aaliya. Rahul decides to steal the jewellery from both Aaliya and Rhea’s rooms. Shahana asks Aryan to help Ranbir. She tells that he should fulfil his duty, knowing Ranbir doesn’t want to see Sid and Prachi’s marriage. He tells that just Prachi can handle this situation. She tells him that Pallavi isn’t listening when Prachi refused to marry. She asks him to talk to Ranbir and find out what’s in his heart. She tells that they will help Ranbir and Prachi, even if they have to go against the family. She encourages him. She wants Ranbir to support Prachi.

Reviewed Rating for Kumkum Bhagya 6th September 2022 Written Update Mad Ranbir: 1/5 This rating is solely based on the opinion of the writer. You may post your own take on the show in the comment section below.