Bhagya Lakshmi New Trouble 7th September 2022 Bhagya Lakshmi episode spoiler – Lakshmi in a soup Lakshmi’s lawyer says that the food was made by the hotel chefs and not by Lakshmi. He requests the judge to free Lakshmi. She says that he is telling wrong as she only made the food. Malishka smiles. The lawyer warns them to let him do his work or they can hire a new lawyer. Rishi and Lakshmi are alarmed.

Siddharth tells Apeksha that he feels like slapping her but doesn’t want to dirty his hand. He says that Mithai was right that she is not worthy of being his friend. He says that it is their last meeting and warns to show his bad side if she tries to come in between him and Mithai. Apeksha attacks Siddharth. He falls unconscious. She puts him in her car and goes away.

Rani asks Pavithra does she know what does Pishachini mean and how did she become one. She turns upside down and says that Pishachinis never leave anyone’s back for many births and trouble a lot. Pavithra warns Rani that she is standing like a wall between her and the Rajput family which she can never cross. She says that she will very soon get buried behind the wall.

Harman asks Ajooni to clean the god’s vessels. Ajooni doesn’t find water in the tap and goes into the bathroom. The geyser blasts. Amanpreet and Ravinder are shocked. Harman smiles wickedly. 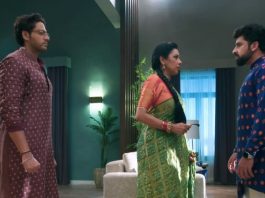