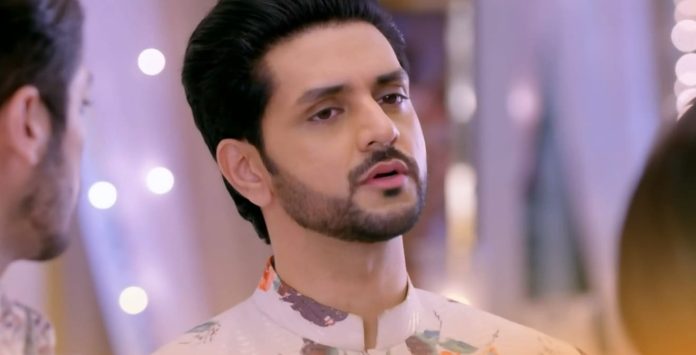 Kundali Bhagya 8th September 2022 Written Update Arjun’s truth Anjali finds Prithvi in disguise. He tells her that he knows Arjun’s truth. She asks what is he talking about. He tells that he knows the truth that Arjun wanted to kill Rishabh. Anjali is left stunned. He blackmails Arjun. Rishabh asks Arjun to not get between Preeta and him, such little fights do happen. Abhishek tells that no third person should talk between a husband and a wife. Arjun tells that Abhishek is right, nobody should interfere between two people, they don’t know what they have in their heart. He taunts Rishabh and Preeta. Rishabh finds Arjun’s behavior getting strange. Arjun learns that Prithvi has arrived to blackmail him. He grows worried. Rakhi starts seeing Karan in Arjun. How will things turn up? Keep reading.

Preeta tells that Kavya doesn’t share her favorite things. Kavya calls her baby doll. Preeta gets reminded of Karan. Karan watches Preeta’s changed expressions. Preeta goes away. Kavya tells that Preeta gets upset when she calls her baby doll. Karan asks Kavya is she okay. Kavya tells that she isn’t scared of any wound, she will become a big cricketer one day, she will soon become famous and have many fans. Karan finds Kavya just like him.

Kavya plays with a cricket ball. She asks Anjali not to touch the ball. Anjali tells that she was offering help. Kavya asks her not to help her, its her favorite ball, because it belongs to Karan Luthra. Anjali asks her what does Preeta tell her about Karan. Kavya tells that she doesn’t talk to strangers. She compliments Anjali and goes. Anjali finds much attitude in her. She tells that Kavya is naughty, but sweet.

Karan asks the waiter to get water chilled for him. Anjali asks Arjun not to behave like Karan in front of the Luthras. He tells that he is Karan himself. Anjali finds him behaving like Kavya. He tells that she knows him well. Biji finds them arguing. She tells Karan that he would have been glad seeing him. She adds that Kavya has gone on Karan totally. She then changes the topic and doesn’t tell anything to them. She doesn’t divulge the truth that Kavya is Karan’s child. Karan gets thinking of Biji’s incomplete statement. He feels there is something not known to him. Prithvi tells that he has taken Sherlyn for granted, when she always does as he wants. He decides to give her happiness and peace. He sees Anjali and blocks her way. Anjali recalls Prithvi. She tries to run away. He catches her. He tells that he has come to tell Arjun’s truth to the Luthras, that Arjun wanted to kill Rishabh. He threatens her.

Anjali asks him what is he doing. He asks her to unlock her phone. He saves his number in her phone. He asks her to call him when she finds Arjun, without acting smart. She asks him what does he want. He tells that he wants everything from Arjun, he will just tell him. Preeta finds Shrishti worried. She asks her what’s the matter. Shrishti tells that Rakhi told that Arjun reminds her of Karan, Mahesh also told that he recalls Karan whenever he sees Arjun. Preeta doesn’t want to hear it. Shrishti tells that Rakhi said that Arjun is Karan. She reveals that Arjun knew about Rakhi’s phone being under her pillow.

She calls it a strange coincidence. She tells that Arjun asked Mahesh for his golden pen, which Karan used to ask for. Preeta asks her to stop it. Shrishti tells that everyone sees Karan in Arjun. Preeta tells that it can’t happen. She rebukes Shrishti. Karan recalls Biji’s words. He tells that something is missing, he has to find out the truth behind it. He tells that he should find about Kavya’s birth. He checks Preeta’s room. Sameer finds him in the room. Karan tells hat he was looking for a pen. Sameer asks him to come and have fun with them.

Preeta asks Rishabh not to work until there are guests in the house. Rishabh asks her to listen to him. He tells he didn’t mean to upset her. She tells that he knows it, Bappa has come home, his work is important, but he should schedule the work. She tells that she just wants Rishabh to be with her on this day, else everyone will ask her about him. He asks her what did she say. She tells that everyone will ask about him. He asks her what does she want. She apologizes to him. He tells that she doesn’t need to apologize. She asks him to not misunderstand her. Karan thinks what is happening. He asks Rishabh is everything fine. Rishabh tells that there should be such cute fights. Karan taunts Preeta.

Sameer tells that he shall make a video, he is seeing their nok jhok for the first time. Rishabh asks him not to make any video. Abhishek tells that they shall not interfere between a husband and a wife. Karan taunts that they don’t know what’s in their heart. He tells Preeta that she is really good, she was fighting, but everyone thinks that she is talking sweetly with love. Sameer tells that Arjun is a nice person. Rishabh tells that Arjun is his business partner now. Preeta asks him if the contract got signed. She gets upset. She goes to Arjun and asks him to behave maturely.

Preeta asks him to not joke. Karan jokes on her and calls her a fighter cock. He laughs. Preeta gets upset. Sameer tells that he will call Arjun for dance to please Bappa. Preeta asks him not to call Arjun. Rakhi asks them to call Arjun and dance. Karan asks Janki not to take Preeta’s side. Sameer asks Arjun to come and rock the dance floor. Karan refuses. The DJ plays a romantic song. Kareena takes Rishabh and Preeta for dance. Rishabh gets glad thinking Preeta wanted him by her side. They both dance romantically. Karan gets jealous. He dances with Anjali. Sherlyn and Prithvi keep an eye on Luthras. He tells that he just loves Sherlyn. Sherlyn gets pleased, that he isn’t seeing Preeta and Kritika. Karan dances with Preeta. Preeta stamps his feet in anger. Rishabh asks Arjun what happened to him.

Reviewed Rating for Kundali Bhagya 8th September 2022 Written Update Arjun’s truth: 4/5 This rating is solely based on the opinion of the writer. You may post your own take on the show in the comment section below.