Bhagya Lakshmi 22nd September 2022 Written Update Rishi’s sacrifice Uday gets to see the footage. He tells that they have two exclusive news, it will make their channel number one. He doesn’t understand why Lakshmi saved the people from the terrorists, when she is already charged with harming many lives. The judge also gives the credit to Rishi and Lakshmi, who saved many innocent lives. He thanks them for their brave act. Dadi asks Lakshmi to come home with them. Inspector tells that Lakshmi has to go to the jail, the court will decide about her. Virender requests the judge to take Lakshmi home. The judge tells that legally, he can’t permit them to take Lakshmi home until the case ends.

Malishka gets happy that fate didn’t support Lakshmi this time. Rishi tells the judge that injustice shouldn’t happen with Lakshmi, she is innocent. He appeals that they schedule the case hearing on the same day. Judge agrees to him. Rishi promises Lakshmi that she will go home today. Ayush feels proud of him. He promises that he will also love his lover so passionately and sincerely, just like Rishi. Rano gets happy that she is safe. She tells Neha about the terrorists. Uday presents the live footage of the terrorists attack. Neha gets to see the video. She is terrified learning about the huge threat.

Neelam and Karishma wish Lakshmi’s chapter ends in Rishi’s life. Malishka wants to know what is Rishi planning. Rishi takes the blame on himself to save Lakshmi. He tells that he compromised on the food quality, just to save the hotel from losses. He tells that he wanted to save the hotel from sinking, so he didn’t care about the food quality and taste. He lies that he was using expired food items. Rishi sacrifices his life to save Lakshmi. He tells that the food was poisoned, but the expired food ingredients caused the food poisoning. He takes the responsibility of the entire mess. Lakshmi and the family are left stunned.

Lakshmi tells the judge that Rishi is lying, the hotel staff doesn’t compromise on any food items. Virender tells that Rishi has said this to save Lakshmi. Ayush understands its Rishi’s plan. Rishi stops Virender. Ayush asks Virender to let Rishi continue, its his plan. Virender apologizes to the judge. Neelam asks Ayush why is Rishi taking the blame. Rishi tells that Lakshmi is innocent, its his mistake. Basu asks Rishi what is he saying. He tells that he will save Lakshmi, Rishi doesn’t need to take the blame. Rishi tells that he has promised Lakshmi that he will keep her faith.

Amod tells that its really strange that Lakshmi is accused, while Rishi is the culprit. He asks the judge to believe Rishi and punish him. Lakshmi tells that Rishi is lying to save her. Both Rishi and Lakshmi argue to take the blame on themselves. She tells that truth always wins, she is innocent, she will be proved innocent, he doesn’t need to lie. He tells that he isn’t mad, he is saying the truth, she should just listen to him. She can’t stay quiet seeing him take the blame. He worries that she isn’t listening to him. He gets an idea to make her quiet. Neelam and Malishka watch their banter. Rishi asks Lakshmi to tell if she is his wife or not. Lakshmi tells that she is his wife. He questions her further.

He reminds her promise that she will always support him. He tells that if she doesn’t listen to him, then the vows will become a lie. Judge asks Lakshmi to go to the witness box. Rishi quiets Lakshmi. He tells that he is ready to bear any punishment. Judge tells that he has seen a lot in a single day, the terrorists attack, their bravery and now Rishi and Lakshmi’s love. He knows Rishi and Lakshmi can do anything to save each other. He doesn’t know the truth, who is wrong and who is saving the other person. He tells that they have to investigate the matter further, the verdict will be given in the next hearing, since Rishi accepted the blame, Lakshmi is regarded innocent and released.

Ayush understands that Rishi took the blame to keep his promise. The court gets adjourned. Lakshmi asks Rishi why did he do this. Rishi is happy that she will be going home. He tells that he can do anything for her. He tells that he will come home soon. He hugs her. Neelam tells Rishi that she is really appointed with him, he can’t decide to go to jail. Malishka tells him that she has done a lot to save him, but he accepted to go to jail for Lakshmi. She tells that she hates him. Shalu and Bani thank Rishi and call Lakshmi lucky that Rishi is her husband.

Dadi tells that she is upset that Rishi is going to the jail, but she is proud of him. Virender tells that their business will get much loss because of Rishi’s statement, but he is happy that Lakshmi isn’t going to jail. Rishi thanks him. Virender tells that he will cover the losses and also free Rishi. Ayush tells Rishi that he is also proud of him. The family leaves Rishi and Lakshmi alone. Rishi is happy that Lakshmi will be going home. He asks Lakshmi to keep smiling. Lakshmi cries for him. Rishi is taken in the police van. Lakshmi madly runs after the van and falls down.

Virender and Ayush worry for Lakshmi. Neelam asks Virender to take her home, even she is upset that her son went to jail. Ayush and Shalu console Lakshmi. Neha learns the shocking news of Rishi’s arrest post his crime confession in the court to save Lakshmi. She shouts and calls Rano to show the news. She tells that Rishi took the blame on himself and got arrested. Rano tells that even Lakshmi is innocent in the matter. Neha asks her does she know who did this. Rano thinks to tell the truth to Oberois that Balwinder did this, Lakshmi is innocent.

Malishka wipes Lakshmi’s tears and taunts her. She force feeds the sweets to Lakshmi and congratulates her for succeeding in her motive. She asks Lakshmi why is she doing a drama that she is upset seeing Rishi going to the jail. She accuses Lakshmi for fooling Rishi and sending him to the jail. She calls Lakshmi’s love fake and selfish. Ahana and Ayush defend Lakshmi. Malishka insults Lakshmi. Lakshmi answers her back. She tells that Rishi knows and understands her and her love. She doesn’t want to explain herself to anyone else.

Reviewed Rating for Bhagya Lakshmi 22nd September 2022 Written Update Rishi’s sacrifice: 3/5 This rating is solely based on the opinion of the writer. You may post your own take on the show in the comment section below. 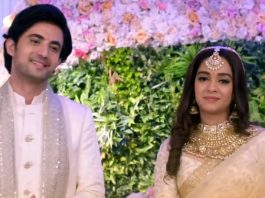