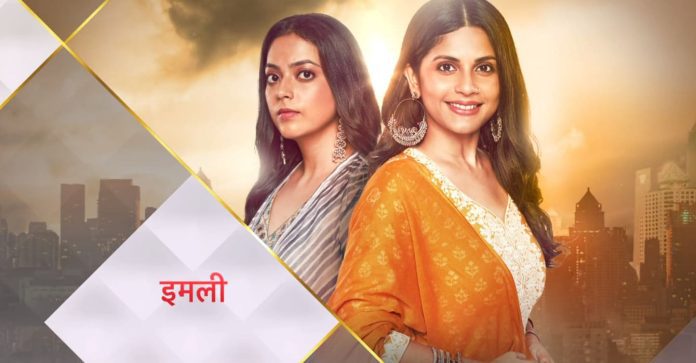 Imlie 23rd September 2022 Upcoming Love triangle Narmada blames Imlie for her parents’ death. She hates her. She refuses to celebrate her birthday. Imlie takes the blame on herself and tells that she took Chini to the music concert, but she didn’t take any drugs. She tries hard to convince the family about her truth. Later, the family celebrates Imlie’s birthday secretly. Atharva comes home and gets into an argument with his dad. His dad insults him for his mistakes. He accuses Atharva. He wishes that he had no son. Atharva gets emotionally hurt. Imlie happily cries when the family gives her a secret birthday surprise. Imlie hugs Chini. She tells that she will never leave Chini and go anywhere. Atharva is disturbed and sheds tears. He misses Chini. He decides to meet her. Atharva and his family meet Imlie and Chini’s family. Atharva gets surprised on meeting Chini there. Atharva’s dad fixes Imlie and Atharva’s alliance.

Yuvan and Banni realize that they have misjudged Agastya. They decide to make Agastya the judge of the music competition once again. They head to request Agastya and apologize to him. Agastya is much insulted by the producer Param Kapoor. Yuvan and Banni reach Agastya and record a video with the help of Rohan. They record their apology for Agastya. Later, Agastya decides to take revenge on Yuvan and Banni. He arrives home to meet them. Banni introduces the family to Agastya. She makes Yuvan decked up as the rockstar. She gives the medicines to Yuvan. Agastya watches them. Yuvan gets insulted in the promo shoot. Yuvan’s model runs away. Yuvan tells that Banni will be his model in the promo shoot. Agastya feels sorry for Yuvan, and decides to win anyhow. He tells that Yuvan can never become a rockstar.