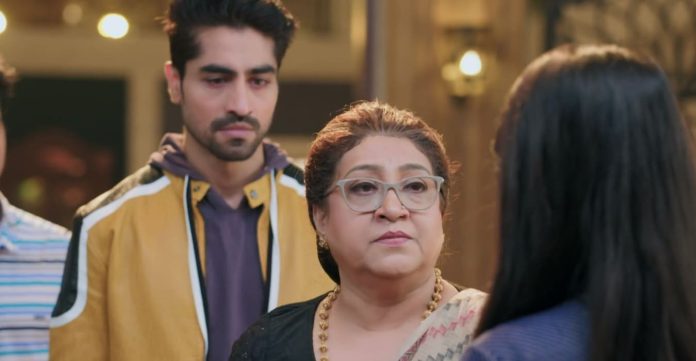 Yeh Rishta 26th September 2022 Written Update Dadi’s revelation Akshara reveals to Abhimanyu the harsh truth of their separation. She tells that she was totally alone, without her family and her husband. Abhimanyu doesn’t want to listen to her. She tells that she will not go without completing her matter. He feels irritated. She asks him why didn’t he ask her if she didn’t come, he didn’t trust her. She feels terrible that his lack of faith has hurt Kairav. She tells that he didn’t ask her anything. She asks him why didn’t he care for her. She tells he has done too wrong with her.

She adds that she has made a sacrifice for their relationship, but she is nowhere in his heart and life. He also questions the same to know where does she stand in his life. He wants to know why she did this. He questions her about the sacrifice she is talking about. He asks her what big thing did she do for their love. He tells her that he has got Kairav arrested for the sake of his family. He claims that Akshara left him, she has no contribution in their relationship. He asks her to speak up now. She gets silent and cries. He doesn’t think she has anything to say. Luckily, Dadi arrives there to reveal Akshara’s sacrifice to Abhimanyu.

Abhimanyu is moved on knowing the truth that Kunal has forced Akshara to sing for Maaya and become her shadow for a year. Dadi tells that Kunal has compelled Akshara to accept his condition, Akshara left for Abhimanyu’s sake, not for Kairav. She adds that Akshara has left her family and life just for Abhimanyu’s sake. She rebukes Abhimanyu. Abhimanyu asks Dadi if Akshara spoiled their life just to save his hand. He blames Akshara for breaking his heart just for saving his hand.

Mahima influences him against Akshara. Neil gives his true opinion about Akshara. He asks Abhimanyu to see Akshara’s love. Both the families pacify Akshara and Abhimanyu. Harsh advises Abhimanyu to understand Akshara and make their relationship better. Abhimanyu asks him to leave him alone. Harsh is emotional about his son’s marriage. He values Akshara’s sacrifice. Parth decides to tell the truth to Abhimanyu. He misses to see the scene created at the hospital, when Akhilesh exposes Anand for operating a patient, being in drunk state himself.

Reviewed Rating for Yeh Rishta 26th September 2022 Written Update Dadi’s revelation: 5/5 This rating is solely based on the opinion of the writer. You may post your own take on the show in the comment section below.