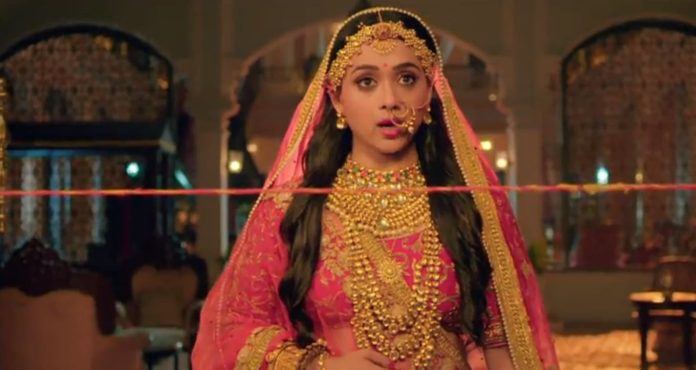 Sasural Simar Ka 4th October 2022 Written Update Simar new avatar Simar protects Aarav from Rudra’s evil move. Simar’s prayers to Matarani get fulfilled when Aarav comes out of danger. She swears to protect him from Rudra and his gang. Rudra has to kill Aarav before sunrise at all costs. He reattempts to kill Aarav. Simar stays as Aarav’s shield. She tells Aarav that he doesn’t want her to go away, but she will be back soon. Chaya reaches Aarav to attack him. The family worries for Aarav. Badimaa feels guilty. She blames herself for Aarav’s condition. Even Sandhya blames Badimaa. Gajender stops Sandhya. Badimaa tells that Sandhya is right. She apologizes to Sandhya. She pleads that Sandhya doesn’t hate her. Sandhya wipes her tears with much respect and love. Simar stands firm on her goal to protect Aarav.

She finds some foot impressions in the house. She thinks to follow the foot impressions. She finds Kamashi and Chaya performing the evil rituals to cage Aarav’s soul. She hinders them. Kamakshi shouts asking will Simar dare to stop her. Simar tells that she will stop Kamaskhi. She reminds her real identity. She tells that Kamakshi can’t see her husband or touch him, she has to first cross her path. She reprimands Kamakshi. Kamakshi sees Simar’s former birth avatar in her again and gets scared.

Also read, Anandi Baa Aur Emily Spoilers:
Emily gets a good news for Anandi. She tells that she has to first disclose it to Aarav, who holds the first right to know it, being her husband. Anandi wants to know the good news. Gunjan tells that maybe Emily is expecting a baby, that’s why she wants to give the good news to her husband Aarav first. She happily reveals to Anandi that Emily is pregnant. A new misunderstanding gets created in the family.