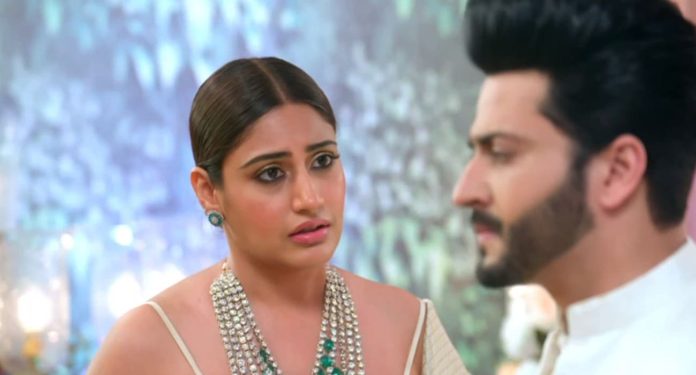 Sherdil Shergill 13th October 2022 Update Raj Manmeet caught Raj decides to tell the truth to his parents. Manmeet doesn’t want Gunjan’s in-laws to know the truth of their fake marriage. He tells that he will reveal the truth, he can’t keep the lie. She plays the video and threatens him. She tells that if he can’t keep her lie, then she can’t keep his lie, she will show the video to Bhairav and tell the truth to him. Raj feels threatened. Bhairav tells Ajeet that Manmeet is young, but he calls her madam, due to her talent. He respects Manmeet. Ajeet tells him that they will have a talk after Gunjan gets married.

Puneet and Ajeet try to explain that Raj and Manmeet aren’t at fault. They don’t reveal the truth of the drama played by Raj and Manmeet. Ajeet asks Bhairav to take time and understand their situation. Manmeet is left with no option. Raj asks her is she blackmailing him. She denies it. He shouts to ask her why did she make the video, just to use the video later on to blackmail him. She tells that when she made the video, she didn’t know about his secret. She asks him to believe her, she has no option, they can’t ruin Gunjan’s marriage. Raj feels like a puppet in her hands. Bhairav is still disturbed thinking of Manmeet’s cheat.

He decides to go back to Mumbai. Ajeet tells Manmeet that they should go downstairs and attend Gunjan’s in-laws. Puneet shows her faith on Raj. Raj tells Manmeet that he won’t go anywhere, he will do the drama if she wants so, but now it will be out of her control. Raj waits for his parents to come in the wedding. Manmeet asks him if he is sure that they will come. Raj believes that his parents will come. Bhairav is still upset. Bhairav and Nirali make an excuse to avoid the wedding.

Gunjan’s in-laws insists Bhairav to come. Bhairav promises to make the hotel with them. Raj and Manmeet meet Bhairav and Nirali to defend their lie. Manmeet accepts her truth. She tells that she had a reason that she hid the truth from them. Bhairav asks her why did she come to talk to them, by leaving her sister’s marriage. Bhairav refuses to attend the wedding. Bhairav ignores Raj’s plea. Raj asks them to talk to him for just two minutes. Bhairav asks Manmeet why did she keep such a big secret. He tells that they will talk when she comes back to Mumbai. He refuses to hear any explanation from them.

Reviewed Rating for Sherdil Shergill 13th October 2022 Update Raj Manmeet caught: 3/5 This rating is solely based on the opinion of the writer. You may post your own take on the show in the comment section below.