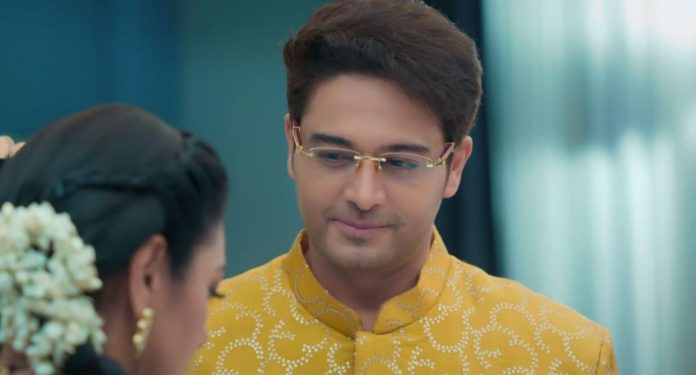 Anupama 23rd October 2022 Written Update Anuj’s special gift Anuj and Anupama don’t trust Ankush and Barkha like before, because of the truth. Anuj, Anupama and Anu spend family moments. Barkha finds Adhik is trying hard to please Anuj and Anupama. She doesn’t want Adhik and Pakhi’s marriage to happen. Anuj and Ankush tell about their first Diwali gifts. Anuj tells Anupama that they should start gift registry system in office. Anupama tells that they shall start it at home as well. Ankush tells Anuj about the accounts file of the new project. Anuj tells that he will handle the international order, Anupama can’t handle it, it’s a tricky thing to check international tax rules and law. Anupama feels bad hearing Anuj’s words. She feels disturbed.

Barkha can’t believe that Anuj has just hurt Anupama’s feelings. Anupama excuses herself. Barkha tells that Anupama might have felt bad, even when Anuj didn’t mean it. On the other hand, Leela asks Pakhi to learn everything until she is there to guide here. Pakhi wants the family to celebrate the festive well. Hasmukh asks all of them to work hard. Anupama takes Anu for Diwali shopping. She tells Anu that they should celebrate the festive by keeping their culture and traditions. She explains Anu that they shouldn’t hurt the environment by the loud noisy polluted celebration, they should have a eco-friendly Diwali.

They return home and meet Anuj. Anuj apologizes to Anupama. He feels really sorry to blurt out such a thing. She tells that she didn’t feel bad of his words, he has told the truth, though he didn’t mean it. She feels she isn’t able to support him well in business. She expresses her feelings. She tells that Anuj doesn’t need her. She wants to lessen his burden. He tells that he doesn’t know how he has hurt her. She feels bad for herself that she isn’t educated like him. She regrets that her studies were left incomplete. He knows that she didn’t get a chance in her past. He encourages her by saying that she has topped in her life’s exam.

He calls her the best person. Later, Anuj and Anupama perform the Diwali puja. Vanraj and Kavya also have happiness and peace in their marriage. Kavya wants just family and its happiness. Vanraj thanks Kavya for accepting him and his family so well. Leela gives a gift to Kavya, and tells that she will also try to be a good Saas. Kavya hugs her. Anuj surprises Anupama by gifting her a college admission form. He tells that he wants to enrol her so that she can complete her studies.

Reviewed Rating for Anupama 23rd October 2022 Written Update Anuj’s special gift: 5/5 This rating is solely based on the opinion of the writer. You may post your own take on the show in the comment section below.