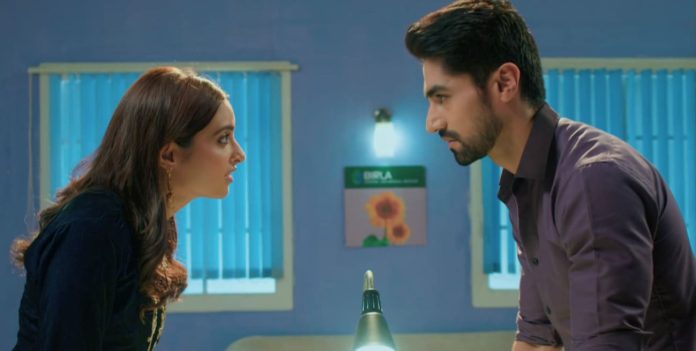 Yeh Rishta Kya Kehlata 30th November 2022 Abhi’s secret out Abhimanyu gets into Manish’s feet and apologizes to him on Aarohi’s behalf. He makes an apology to Goenkas for Aarohi’s mistakes. Akshara asks Abhimanyu why is he apologizing for Aarohi’s mistakes. She asks him if Aarohi had told him to do so. Abhimanyu doesn’t tell anything to Akshara. He goes out to attend Aarohi’s call. He tolerates Aarohi. Akshara follows him and overhears his conversation with Aarohi. Abhimanyu shouts on Aarohi, asking her to stop blackmailing him on Akshara’s name. Akshara worries thinking what is the truth that Abhimanyu is hiding from her, the truth that Aarohi is using to blackmail Abhimanyu. She realizes Aarohi is making Abhimanyu dance on her tunes.

Na Umra Ki Seema Ho: Chitra gets worried for Amba, who is traumatized. She decides to meet the family. She criticizes the family for supporting Dev. Chitra ends ties with the family. Vidhi is really happy after getting Dev’s love. Her parents aren’t aware of Dev and Vidhi’s love story. Dev finds the staff gossiping about his broken engagement. Vidhi doesn’t like the gossip. She makes the staff support Dev, by reminding them Dev’s support to them.

Satyavati meets Amba, who accuses her for provoking Dev to break the engagement. She explains Amba that she has done the right thing, else Dev and Amba would have not been happy. Amba limits Satyavati’s drama. Amba tells that she loves Dev and feels she is his Suhaagan since the last 20 years. She stuns Satyavati. Vidhi is on cloud nine. Her mum asks Vidhi if she is happy that Dev’s engagement broke. Satyavati tells Dev that Amba is a toxic woman. Dev tells that he knows Amba well, she can go to any level.

Reviewed Rating for Yeh Rishta Kya Kehlata 30th November 2022 Abhi’s secret out: 4/5 This rating is solely based on the opinion of the writer. You may post your own take on the show in the comment section.