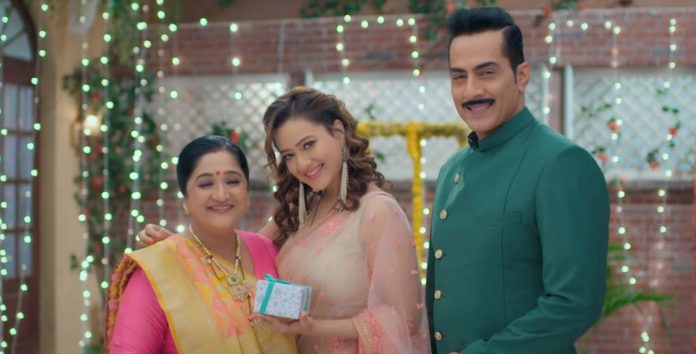 Anupama 11th December 2022 Update New problem for Shahs There is a big drama in Shah household. Pakhi beats up Adhik in anger and throws things on the floor. Adhik asks her to stop it, else she will get hurt. Vanraj asks them to stop the drama. Anuj and Anupama also try to intervene. Adhik decides to leave the house, after Pakhi’s misbehavior gets high. Adhik tells that he is done with Pakhi and their marriage. Adhik tells Vanraj that Pakhi doesn’t want to learn anything in her life, she has no sense to understand the importance of getting independent.

Vanraj asks him to stop it. Adhik asks Vanraj why did he spoil Pakhi so much. Adhik tells Pakhi that he does all the household duties. Pakhi tells that she isn’t a maid. Adhik asks him if he can wash Kavya’s clothes and fulfil her duties. Adhik explains the problems, but Vanraj loses cool. Vanraj asks Adhik to treat Pakhi well. Adhik has an issue that Pakhi is not becoming responsible. She tells that he has an issue that her family is pampering her, while his family didn’t come to see him. Vanraj gets mad seeing Pakhi hurt.

He madly loves Pakhi and doesn’t see her mistake. Vanraj later realizes that Pakhi is also wrong, its her mistake also. Adhik counts Pakhi’s mistakes in front of Vanraj. Vanraj suggests Pakhi to change herself and not make her marriage suffer. Adhik gets hurt in the fight. Pakhi asks him to leave the house if he wants. Adhik leaves the house. Adhik reaches Anuj and Anupama, and complains about Adhik. Pakhi lies to Vanraj about Adhik. Vanraj shouts on Adhik for hurting Pakhi.

Anupama and Barkha defend Adhik, who can never hurt a girl. Anuj stops them from the fight. Vanraj creates a big chaos in the house. Anupama tells Vanraj that they should see Pakhi’s mistake as well. Adhik shows the wound on his face and tells that it’s a result of Pakhi’s anger. Anupama trusts Adhik. She tells that she trusts both Adhik and Pakhi equally, they both are important. Adhik tells that he didn’t push Pakhi, he is saying the truth. His family stands by him. Vanraj warns Adhik.

Reviewed Rating for Anupama 11th December 2022 Update New problem for Shahs: 2/5 This rating is solely based on the opinion of the writer. You may post your own take on the show in the comment section.