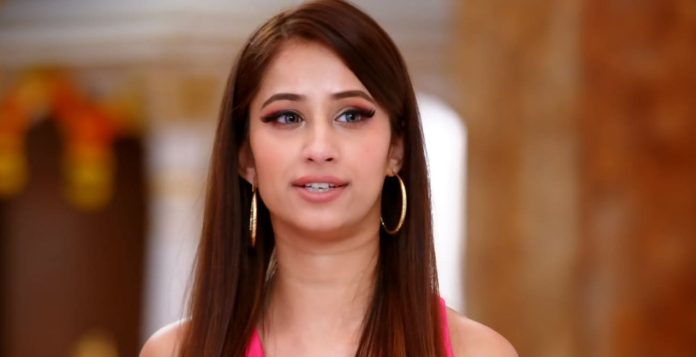 Bhagya Lakshmi 12th December 2022 Written Update Malishka’s confession Sonal and Ashish meet Malishka. They apologize for Kiran’s accident. Sonal asks Malishka if Kiran has told someone about the accident. Malishka tells that Kiran didn’t tell anyone. Ashish asks how can she be so sure, if Kiran tells anyone then they will be in big trouble. Ayush tells Lakshmi that maybe that car wanted to knock down Lakshmi, not Kiran. Lakshmi recalls the car trying to hit her. Sonal tells Ashish that if Kiran takes their name, then they will take Malishka’s name also, because Malishka was also involved in the plan.

Malishka feels guilty. She asks Rishi if their close ones commit any crime, then what should they do. Rishi tells that culprit should always get punished. Sonal hopes that nothing goes against her, else she would have to do what she doesn’t want to do ever. Malishka tells Rishi and Neelam that she knows the culprit. Neelam asks her to just tell the name, she will make sure that the culprit gets punished. Whose name will Malishka take? Will she blame Lakshmi or confess her crime? Keep reading.

Earlier in the show, Malishka asks Kiran to open her eyes and talk to her. She weeps a lot. Neelam asks Rishi to inform the police. Rishi tells that he already called the police. The police arrives there. Lakshmi gives her statement. Inspector asks her about the car number. She gives the car description, but doesn’t know the number. Ayush recollects that he has seen the same car. He tells that he will recall the car number and inform him. Inspector tells that he has to take Kiran’s statement too. Neelam asks Rishi to be with Malishka. Rishi agrees. Sonal hopes Kiran is okay. Ashish asks her why is she thinking so much. She tells that Malishka is her best friend. She calls Malishka. Ashish pacifies Sonal. Malishka wants an answer from Sonal and Ashish.

Malishka cries talking to Kiran. Rishi finds her crying. Nurse asks him to get medicines. He goes from there. Malishka leaves in anger. She comes home and sees Ashish with Sonal. She attacks Ashish and hits on his head. He asks her how dare she hit him. Sonal asks them to calm down. Malishka asks how dare he hit her mom. She blames Sonal for dragging her into this mess. She tells that Kiran is in this condition because of her. Ashish asks her not to raise hand on Sonal. Sonal tells that she also regrets for the happening. She swears that Ashish tried a lot, but Kiran came in between. She asks Malishka to calm down and sit. Rishi doesn’t see Malishka inside. He wonders where did she go. Sonal tells Malishka that it was just a mistake.

She tells Malishka that they are her well-wishers. Rishi asks the nurse about Malishka. He grows worried and looks for her. Sonal asks Malishka and Ashish to stop arguing. She tells that Ashish would have killed her if she dared to slap her, but he didn’t do this, they are her well-wishers, they can’t undo the mistake that happened. She tells that Kiran’s accident happened because of Lakshmi, not them, Kiran came there to save Lakshmi and got in front of the car.

He tells Lakshmi that he feels there is something wrong, the car was speeding, Kiran came in between, maybe the car came there to knock down Lakshmi, not Kiran. She is stunned to hear this. Rishi doesn’t find Malishka anywhere. Neelam calls him and asks about Kiran. She asks him to take care of Malishka. He tells that Kiran didn’t gain consciousness, even Malishka is not around. Neelam worriedly tells that she is coming. Lakshmi asks why would anyone target her. She doesn’t think anyone would plot her accident. She wishes Kiran gets conscious soon.

She tells that Malishka was crying a lot for her mother. She knows the pain of losing her mother. She can’t see Malishka’s pain. She prays for Kiran’s recovery. Ayush feels proud of Lakshmi, who wishes good for Kiran and Malishka. He asks her not to cry. Rishi finds Malishka back and asks her where did she go. She asks him what should they do if their close ones do some mistake. He tells that the culprit should get punished and learn a lesson. Sonal asks Ashish not to think of harming Malishka. He tells that he will kill Malishka if she raises her hand again.

She tells that everything is in control. She promises that they will be safe. She doesn’t want Malishka and Kiran to cause any problems. Rishi asks Malishka does she know who did Kiran’s accident. She tells that she knows it. He asks her to say the name. He tells that he will call the police so that she doesn’t torture herself by thinking so much. Malishka remembers Sonal and Ashish scaring her. Sonal tells that she won’t get anything by harming Kiran. Ashish asks Malishka to go and tell the police about their plan, he will take her name. Malishka shouts on him for threatening her.

Sonal asks Malishka to listen to her and make Lakshmi away from Rishi, just hint the police that Lakshmi has caused Kiran’s accident and she is a witness of this crime. She asks Malishka to testify that Lakshmi has pushed Kiran in front of the car, then Lakshmi will get jailed. She asks her to decide if she has to win this lost game. Malishka asks what will she tell if anyone asks Lakshmi’s motive. Sonal asks her to blame Lakshmi for taking revenge by targeting Kiran. Malishka agrees to her.

Rishi tells Malishka that he has called the police, she can tell everything to the police. Neelam asks Malishka to tell them about the culprit, they will not spare the culprit and teach a lesson. Rishi and Neelam promise to get the culprit jailed. Malishka asks them will they support her. Neelam tells that she will never forgive that person. Malishka tells that she isn’t able to say the name. Neelam asks her to not worry and give the name to them. Rishi asks why is she hesitating in taking the name. Lakshmi grows worried thinking it was her accident plot.

Shalu surprises Lakshmi. She asks Lakshmi why is she worried. Lakshmi tells that Kiran met with an accident, she isn’t fine, she might slip in coma. Shalu pacifies a worried Lakshmi. Lakshmi tells that Rishi is with Malishka, its important that he supports Malishka. She asks Shalu to have something. Rishi asks Malishka to tell the truth to the Inspector. Malishka tells that she is sorry, she was in dilemma before, but now she has no fear because Rishi and Neelam are with her. Rishi asks why is she saying sorry to him. Inspector asks Malishka did she see the criminal. She tells that she was far, till she reached Kiran, the accident occurred. Neelam asks who did she see. Malishka names Lakshmi, and shocks Rishi.

Reviewed Rating for Bhagya Lakshmi 12th December 2022 Written Update Malishka’s confession: 4/5 This rating is solely based on the opinion of the writer. You may post your own take on the show in the comment section.