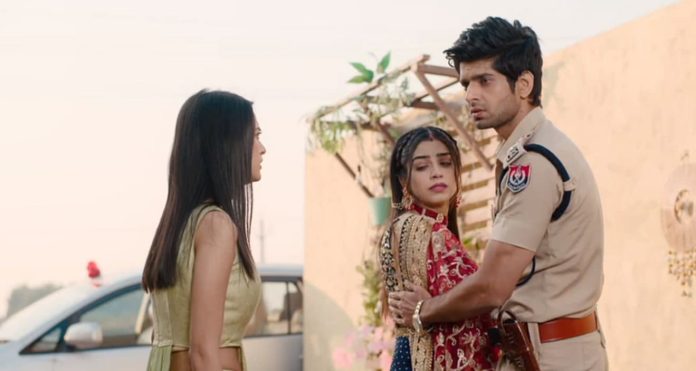 Udaariyaan 21st December 2022 Written Update Nehmat loves Ekam Naaz and Nehmat come home, being accompanied by their husbands. The Sandhus welcome them heartily. Nikhil makes an excuse to cover up his parents’ absence. Rupy is much worried for Nehmat. He asks her is she okay. She replies yes. Rupy hugs her. Naaz remembers Jasmin’s plan. The family is also upset to see Nehmat with someone else than Ekam. Advait refuses to have any food. Nehmat still insists him to have some food to keep Satti’s heart. He doesn’t listen. Naaz and Shelly go away for a talk. Naaz inquires about Shelly’s involvement with Jasmin.

Shelly asks can’t she help a mum. She tells that Jasmin didn’t want Naaz to marry Nikhil. Naaz tells that she loves Nikhil and he loves her too, he treats her so well, but Nehmat gets all the attention. Shelly asks her to take action. Naaz remembers Jasmin’s words. She tells that she doesn’t know what Jasmin is planning. Jasmin meets Shamsher. She offers him a good deal. She reminds him that she has helped him gain this position. Shamsher doesn’t want to deal with her. She tells that she came to congratulate him because they have become relatives. She adds that its about his son and bahu, he should listen to this carefully. Advait makes an excuse and informs Sandhus that they must depart early.

Rupy claims that they did not spend enough time with Nehmat. Advait gets blunt in his replies. Nehmat asks him to stay back for some time. Nikhil asks him if the trip is necessary. Advait tells that he has to go. Jasmin asks Shamsher did she not find out about his bahus. She asks does he know about Naaz’s family background. Shamsher tells that Naaz is Rupy’s granddaughter. Jasmin pities him. She tells that he will be in shock after knowing the truth. Rupy and Satti surround Nehmat and ask her if she is fine. Nehmat lies and claims that Advait is acting appropriately and that everything is fine.She promises that Advait and she are trying best to accept each other. She hugs Rupy and Satti. She appears happy. She excuses herself.

Shamsher tells that he knows Nehmat is Tejo and Fateh’s daughter. Jasmin tells that Nehmat isn’t a Sandhu or Virk, Tejo isn’t her mum, she just adopted Nehmat and raised her. He asks who has told her this. She claims to know a lot about Sandhus, Naaz, and Nehmat and that they are unrelated. Advait also hears this truth. He learns that Nehmat isn’t Tejo and Fateh’s daughter. Nehmat weeps, thinking of Ekam. She is hurt that she lost Ekam. She tells that she can’t break the strings of love with Ekam.

She just wishes the best for Ekam. Ekam gets informed by Renuka that Mallika has left the house in anger. He asks her not to worry, he will find Mallika. Nehmat gets to see Mallika at the door. Mallika rebukes her for snatching her husband, future and Sasural. She lectures Nehmat. She shows Advait and Nehmat’s pictures and tells that this is her real truth. She wants to show the pictures to everyone in the family. Nehmat asks Mallika not to tell anyone. She doesn’t want to hurt the family. She knows that Mallika is broken, but she isn’t the reason for that. She tells that Mallika is mistaken, its not the truth. She drags Mallika out of the house, until the point where Mallika shoves her away.

Ekam reaches just in time and saves Nehmat from falling. Advait asks Jasmin what is she saying about Nehmat and Naaz, and how true it is. Jasmin tells Shamsher that Advait doesn’t want to know the truth, but the people would be interested to know. Shamsher requests that Jasmin tell him whose daughter Nehmat is. Ekam asks Mallika not to punish Nehmat’s family, they aren’t liars like Nehmat. He doesn’t want to break any heart. He tells that if they tell the truth to the family, then they will sink in sorrow, and won’t do what Nehmat did to them. He takes Mallika home. Nehmat wants Ekam to know that it’s not her fault.

Reviewed Rating for Udaariyaan 21st December 2022 Written Update Nehmat loves Ekam: 4/5 This rating is solely based on the opinion of the writer. You may post your own take on the show in the comment section.