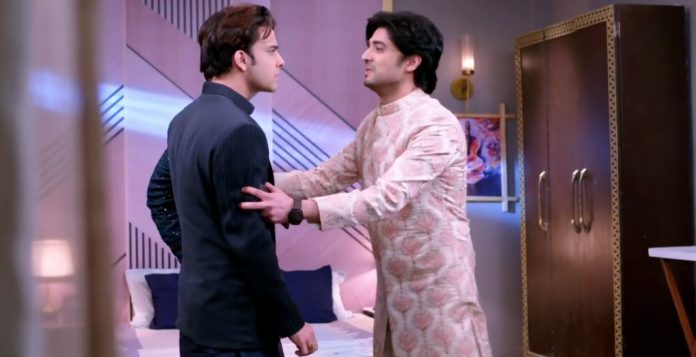 Kumkum Bhagya 22nd December 2022 Written Update Sid reveals truth Rhea and Prachi get into a row over the DNA test. Prachi asks her if she is scared of the DNA test results coming. She expects Rhea to get exposed. Rhea is calm since she has already done her work. She tells Prachi that even if the reports come, she will change it and get the reports with her desired results. She tells that she will change the reports just like she changed her fate. Prachi swears she would have answered Rhea correctly if Dida hadn’t been sick. She claims she would have evicted Rhea from her home. She angers Rhea.

On the other hand, Sid takes Ranbir for a talk. He requests that Ranbir trust him and hear the truth once. Sid breaks the truth that Rhea and Aaliya have kidnapped Mihika. Ranbir is in shock to know that. Prachi tells Rhea that she knows the truth, Rhea isn’t pregnant. Rhea tells that Prachi got to know her truth of the fake pregnancy, but even she/Rhea got to know some secret, that Prachi knows about Mihika’s whereabouts. Prachi is stunned. Keep reading.

Earlier in the show, Prachi and Sid leave the mandap again and rush to Dida. Aaliya asks them to sit back in their place. Vikram tells that they shall take Dida to the room. Sid goes with Dida. Pandit tells that groom and bride shouldn’t leave the mandap so soon. Prachi fears about Dida’s life. She asks them to call some doctor for Dida’s emergency. Pallavi asks them not to panic. Dida reveals the truth to Sid, after Vikram runs to call the doctor. She slaps Sid, and tells that she has done this drama to stop his marriage. Aaliya hears this truth. Dida blames Sid for the entire mess. She tells that she will stop the marriage somehow. Sid tells that even he doesn’t want to marry. Dida inquires as to what he means by that.

Dida asks Sid doesn’t he want to marry. Sid claims he never wants to marry, but he is simply complying with the elders’ wishes. Dida asks him to get a glass of water. Aryan gets the phone. He claims that the doctor’s phone number is missing. Vikram also looks for his phone. Prachi shows Vikram’s phone. Ranbir and Rhea come home. Rhea asks why did the marriage stop. Prachi tells that Dida is unwell. Pallavi tells that Dida suffered a heart attack. Ranbir hears this and runs to Dida. Rhea questions Pallavi about why she didn’t complete the marriage. Pallavi asks Rhea is she serious, Dida is not well. Prachi tells that she can’t stay back, she has to go and see Dida. Aaliya and Sahana get into an argument.

Ranbir approaches Dida and asks what he can do for her. Dida asks him to stop the marriage. She tells that he must stop Prachi. He tells that it’s not in his hands. He asks Dida to take rest. Sid and Ranbir go for a talk. Rhea reminds Prachi that she is getting married to Sid, but she is shameless enough to romance Ranbir. Prachi asks her to not cross her limits. Rhea tells that Ranbir is married to her. Prachi doesn’t want to fight with Rhea. Rhea tells that she wants to fight, because Prachi always ruins things and creates problems. She blames Prachi for setting her own life. Prachi tells that she has to see Dida. Rhea asks her not to worry about any family member. She asks Prachi to get married, and leave the house. Prachi says she wants to tell her, but she’s not selfish.

Rhea becomes enraged and slams Prachi to the ground. Prachi is in shock. She gets angry on Rhea and calls her insensitive to harm her and her baby intentionally. She tells that this proves Rhea isn’t pregnant, else she would have understood a mother’s feelings. Ranbir drags Sid into his room and beats him. He tells that Sid is the reason for all the mess, Dida is unwell because of Sid, Prachi is marrying Sid, and this is the main problem. He rebukes Sid for cheating him. Dida asks them not to fight. She goes to call Vikram. Ranbir bashes Sid. Sid asks him to listen to him, Prachi and he don’t want to marry, its just a drama. Prachi calls Rhea’s pregnancy a drama.

Prachi claims she has had reservations about Rhea for a long time. Rhea asks her how can she say this. Prachi tells that even Rhea had called the baby illegitimate. Rhea asks her about the proof. Prachi asks Rhea about the DNA test. She claims that she, too, can play games, albeit better, but she does not lie or cheat. She adds that she has done a sister’s duty since long, but Rhea will see her Sautan from now. She tells that she won’t share the house with Rhea, which means the latter has to leave. Rhea tells that the DNA test reports won’t come soon, and she can even change the reports as she wants.

Prachi claims that the truth will be revealed at any time. Prachi accuses her of being shameless and insensitive for not considering any relationships. Rhea tells that she was enjoying the fake pregnancy, and then she felt its boring, she just wants Ranbir. She asks Prachi what she plans to do now that she isn’t pregnant. She asks her if she knows about Mihika. She gives her a hint. She tells that she had made this plan to get Prachi and Sid married. She asks Prachi to come for the marriage. Sid asks Ranbir to trust him. He tells that he is helpless to marry Prachi, because of Mihika.

He continues to say that Aaliya and Rhea have kidnapped Mihika, if he doesn’t marry Sid, then they will kill Mihika. Ranbir inquires as to how long he will continue to lie. Sid calls Aaliya to prove his truth. She doesn’t answer the call. Ranbir calls him a big fraud and tells that he will expose his truth to the entire family. Sid gets Aaliya’s call. He asks Ranbir to see who is fraud and who is true. He asks him to listen to him first. He informs her that Aaliya and Rhea kidnapped Mihika and forced him to declare that Prachi’s baby is his. He reveals the details to Ranbir.

Ranbir doesn’t believe him, and confronts him. Sid tells that he got saved from Aaliya’s attack, so she got Mihika kidnapped. He asks her to know the truth. He tells that Mihika didn’t come in the marriage, because she is kidnapped. Sid answers Aaliya’s call. Aaliya asks Sid to go to terrace and talk to her, because she doesn’t want anyone to hear their talks. She tells that she wants to show him something on the video call. Ranbir tells that this doesn’t prove anything. Sid asks him to come with him. Dida informs Vikram and Pallavi about Ranbir and Sid’s fight. She asks them to stop them. Aryan tells that they have put Ranbir in this situation. He taunts Prachi. Prachi asks Dida to stay calm. Dida tells that she is absolutely okay, she did the heart attack drama to stop the marriage. Prachi is surprised to know this.

Reviewed Rating for Kumkum Bhagya 22nd December 2022 Written Update Sid reveals truth: 5/5 This rating is solely based on the opinion of the writer. You may post your own take on the show in the comment section.