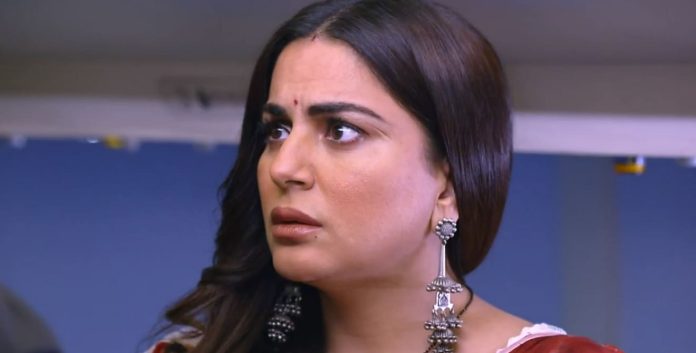 Kundali Bhagya 23rd December 2022 Written Update Preeta captive Preeta and Karan are on the same flight. The flight gets hijacked. She gets troubled when she comes across the hijackers. The terrorists threaten Preeta. She tries to run away, but the terrorists hold her captive. The family receives a shock when they find Preeta captured by the hijackers. Karan comes in front of everyone and reveals his truth. He removes the disguise. He takes a stand for Preeta, Kavya, and his family. Karan’s truth will get known to the family in the hijacking twist. A series of huge twists will be coming in the show. Keep reading.

Earlier in the show, Rishabh visits Arjun’s house. Anjali tells Dadi that if Rishabh fails in getting the bank loan, then he will come on the roads. She checks the door and finds Rishabh and Sameer there. Rishabh and Sameer greet Dadi. Rishabh asks Dadi didn’t she feel happy seeing them. Dadi tells that she has a bad mood. Sameer tells that they will cheer her up. Rishabh tells that they have come to meet Arjun. Dadi tells that he has gone out. Anjali tells that Arjun will come late. Rishabh tells that he is free, he has much time, he will wait for Arjun. Anjali tries to get rid of them. The terrorists don’t find the bullets. They look for the bullets, so that they begin their hijack plan. Preeta reaches there and gets scared seeing the terrorists. She also gets caught by them.

Shrishti asks Rakhi if Kareena really has a boyfriend. Rakhi asks her to stop the nonsense. She tells that Kareena doesn’t like anyone. Shrishti jokes on Kareena’s arrogance. Kavya, Karan and everyone are shocked to see Preeta caught by the hijackers. The flight gets hijacked. Rakhi begs them to spare her Bahu. Kavya scolds them. Karan tells that Kavya is a little kid, such an environment isn’t safe for her. Rakhi scolds him. The passengers argue with the terrorists, who keeps their demands to release the people free. Preeta gets support from Karan. Karan asks them to take him hostage and release Preeta. The hijackers threaten the pilot also. They want to talk to the authorities. Preeta asks them to leave her free. They contact the officials. They tell that they will not leave the passengers free, many of them will die by their terror. They ask the pilots to land the plane at the nearest airport.

Rishabh argues with Anjali. He asks her can’t she tell the truth. He tells that she knows how the people function, she is smart, but not so smart that she can outsmart them. He doesn’t trust her. Sameer rebukes her for blaming Rishi and stooping so low. Rishabh asks him not to lose his values in anger, Anjali had a reason to do this, they will not fall to this level, they will just keep their pride and respect. Anjali asks her how does she keep two faces.

She tells that Preeta and Rishabh have troubled Arjun. She asks him not to get angry. Rishabh asks her to just hear out herself, then she will understand who is he. He explains her. He tells that he is angry, he got punished for the mistake which he didn’t do. He adds that he didn’t insult her, there is a difference between them because of their values. He asks Anjali not to provoke him, its not his mistake that he is protecting his daughter.

He requests her to tell Arjun to stay away from them. He states that Arjun always does something to trouble them, the day when their patience breaks, they will attack and Arjun won’t be able to tolerate it. Sameer tells that they will go and check if Arjun is here. Rishabh tells that he knows Arjun is on the flight. He respects Dadi. He asks her to teach Arjun and Anjali to not lie, else their goodness will get ruined. Rakhi worries for Preeta. Karan tells that they will cooperate. He asks them to understand that little kids are also with them. Kavya asks them not to feel scared. She encourages them. She refuses to go. Karan wants to tackle them. He feels worried when he sees Preeta hurt.

Preeta tells that she wants to go to her daughter. The goon asks her not to create a scene. Preeta scolds him. She gets hurt. Karan loses his cool. He shouts on the goon. Rakhi angrily slaps the goon. The goon replies and goes to stab Rakhi. Karan bashes the goon, while protecting Rakhi. Karan’s fake moustache gets pulled by the goon. The Luthras are shocked to see Arjun. Karan takes control. He soon gets beaten up by the goons. Luthras melt their hearts for Arjun, seeing him getting bashed.

Preeta asks the goons to stop beating Arjun. The goon asks Preeta to explain her husband to not act like a lover. Preeta gets reminded of Karan. The hijacking news spreads. The police takes action. Preeta tells the goons that Arjun isn’t her husband. She asks them not to take Arjun’s life. The goons call Kavya as Preeta and Arjun’s daughter. They ask Preeta not to lie. Rakhi also tells the truth that Arjun isn’t Preeta’s husband. Preeta cares for Arjun’s wounds.

Reviewed Rating for Kundali Bhagya 23rd December 2022 Written Update Preeta captive: 5/5 This rating is solely based on the opinion of the writer. You may post your own take on the show in the comment section.