A girl is shown running in the dark and says please Rohit, forgive me, I m really very sorry, forget everything, let me go, its not my mistake. Rohit aims a gun at her and says what did you think you will be ditching me, I loved you and you cheated me, broke my heart. She says please…….. he says don’t be scared, I will not give you death, but a life which will make your every day hell. She says let me go, please I m sorry. Rohit puts the gun on his head and says I love you. He shoots himself. She shouts Rohit….

Its just a scene of the film. The guy is the superstar Aryan Khanna. Many fans surround him and takes his autograph. Aryan leaves in his car. Aryan thinks of his wife Tanya who was annoyed with him and packed her bag to leave him. Tanya argues with him saying he has a wife and a son, but he is irresponsible. She leaves with her son and says you don’t have time for us. He tries to stop her and their son Vicky also wants to stay with Aryan. Tanya takes Vicky and leaves.

Aryan thinks of how he got alone after his family left him. He comes home and sees the breaking news on tv that Tanya Khanna left home. The door bell rings and Aryan opens the door to see. He sees a toy saying congratulations. He looks around but there is no one. He kicks the toy and goes inside shutting the door. He drinks wine and the door bell rings again. He opens the door and sees the same toy again which he has kicked. He thinks who is playing with him. He asks who is it, do you think its funny. He kicks the toy far this time and shuts the door. 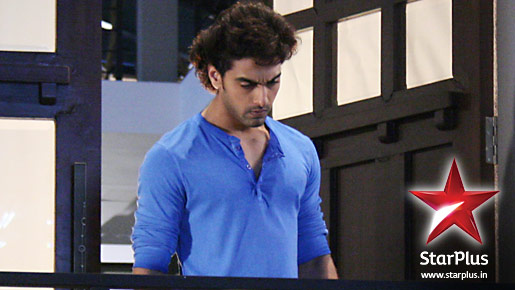 The bell rings again and he takes a golf stick to beat the guy. He sees his friend Rahul and says I don’t believe you did this bad joke. Rahul asks what happened. Aryan sees the toy disappeared. Rahul asks are you ok. Aryan calls the security and asks did anyone come here. The guard says no. Aryan says I m fine, come inside. Aryan says after the media knew about my and Tanya’s separation, people are doing this, I m worried. He says it can be anyone, fan, media, or Tanya. Rahul says Tanya can’t do this, you know her. Rahul asks him to come in Singhania’s daughter’s birthday party.

Aryan says I can’t go. Rahul says I m your friend and your business manager, my advice is you must face the media. He says if you isolate yourself, they will write wrong about you. Singhania should not be upset with us and his daughter is your big fan. Aryan says fine, lets meet her. Singhania wishes his daughter happy birthday and gifts her. She asks her real gift. He shows her Aryan in the party. She is very happy and hugs her dad. She runs to meet Aryan.

She comes and hugs Aryan. Singhania welcomes him and says she is my daughter Urvashi. Aryan brings a bouquet for her. She sees the other girls hugging Aryan and is upset. Urvashi ruins the girl’s phone in which she took a pic with Aryan. Aryan calls Tanya and Tanya rejects it. Urvashi comes to Aryan. Aryan likes the bracelet and says my mum also had the same. She says I know, I saw a pic and made this. She asks why are you upset. She asks about his separation. He says yes, I m upset, the reason is I can’t meet my son, it was his birthday yesterday, we used to celebrate well every year, I used to pick him from school and have icecream, but this time I could not do anything.

She holds his hand and says trust me, everything will be fine. She says thanks for coming. Aryan says I m glad you are happy, take care. He leaves. Tanya comes to pick Vicky from school. She gets tensed seeing Vicky missing. She is informed that some relative took Vicky. Urvashi picks Vicky and spends time with him. She does the same how Aryan used to do. Tanya calls Aryan and tells him someone took Vicky. He says don’t worry, I m coming. Urvashi plays with Vicky and makes him eat icecreams.

Aryan tries hard to find Vicky. Tanya cries and says its all my fault, I m sorry. Aryan hugs her and says I m with you, I promise nothing will happen to him. He says maybe he went home, I will find him. Urvashi asks Vicky not to tell anyone that he was with her. She drops him home. Tanya rushes to meet Vicky and asks are you ok. Vicky says I m fine, I had so much fun. He says it’s a secret. Tanya scolds him and asks with whom was he. Vicky cries and says you are bad, I want to go to Papa.

Urvashi calls Aryan and tells him that she celebrated with Vicky on his behalf. Aryan gets angry and scolds her. He says who gave you the right to pick him without our permission. She says I m sorry, I wanted to make you happy. Aryan says just shut up, don’t dare to do this again. Tanya calls Aryan and says Vicky came home. Aryan sits to drink wine. He gets a message of Vicky’s pics from Urvashi. Aryan feels happy.

Next day, Aryan calls Urvashi and says I m sorry, I was angry yesterday night. Urvashi says its fine, you were right, I should have not done that, I m sorry. He says thanks, I felt happy seein the smile on Vicky’s face. She says Vicky is adorable. Aryan says I want to go for dinner with you. She says sure, I will message the address of my fav restaurant. She is very happy. They come for dinner. 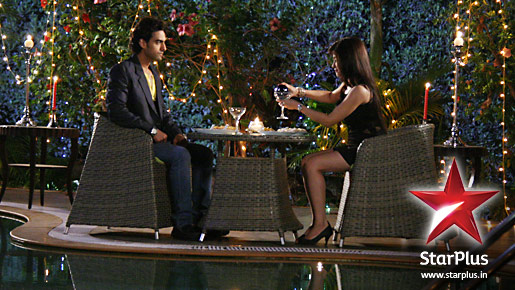 He asks why did you do all this. She says as I like you. He says you like my work, you don’t know me. She tells him what she knows about him. He says I got it, I don’t know I should be happy or worried that someone knows me more than myself. She asks shall we meet for coffee tomorrow on 2pm. He says you are unbelievable. She says say yes, else I will kidnap your son again. He smiles. Tanya gets a parcel with Vicky and Urvashi’s pics. She is surprised seeing Urvashi and Aryan’s pics in it. She gets annoyed.

Aryan is shooting. Tanya calls him crying and asks what do you think, you used Vicky. He asks what are you saying. Tanya warns him to stay away from Vicky thinking Aryan took Vicky that day. Urvashi keeps an eye on Tanya and is happy to see Tanya arguing with Aryan. She pays money to the photographer. Aryan and Urvashi meet again for coffee. Ishq awara hai……….. ishq banjara hai…………….. plays…………… 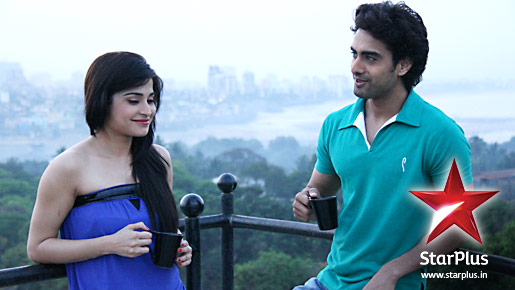 Kaisa ye ishq hai…………bas ishq hai………….plays………… Aryan also falls in love with her. They spend a night together. She asks him to stay with her and not leave. He says I have to leave, you know media, if people know what will they say. He says I m not divorced yet. She gets angry and asks is there anything between him and the actress Tina. He says what if Tina and I are really linked. She gets angry. Aryan says I m joking. Aryan attends the function with his costar Tina. Tina gets a call and goes away to talk. The producer asks where is Tina. Tina is killed. Aryan and everyone are shocked to see her dead body.

Aryan sees Urvashi’s bracelet near Tina’s body and understands its Urvashi who killed Tina. He comes to Urvashi’s home and rushes to her room. He is shocked to see his photos all over the walls and even on the ceiling. Urvashi comes to him and says hi, how did you like this. She hugs him. He asks where were you. She lies to him. He asks about her bracelet. She says I don’t know, maybe it fell anywhere. He shows her the bracelet and she is shocked. She asks where did you get this. He says what you did, can’t be forgiven, you killed an innocent girl, are you mad, surrender yourself to the police. She says trust me, I did not do anything. He says I won’t see your face again.

She says I did this as I love you. He says are you mad, I m married. She says I will do as you say, stop. Aryan leaves. She cries and thinks Aryan can’t go, he loves me, he will come back and we will be happy together. She is mad and tells they love each other. 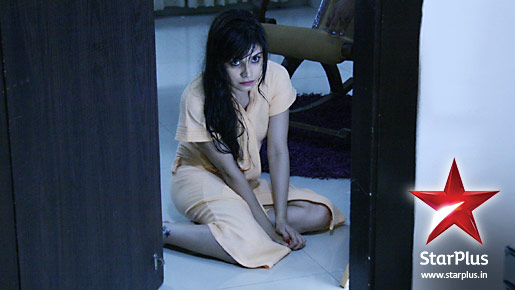 She calls Aryan. Aryan is disturbed and does not answer her call. Aryan comes home and gets a message. He is shocked seeing her suicide pic. He rushes to see her in the ICU. Aryan meets Singhania. He comes to Urvashi and she is happy to see him. He says why did you do this, you are a kid who needs help, I spoke to your dad, we decided that I will go away from your life, your dad will take you to US and take psychiatric help for you, take care, I have to go. Urvashi cries.

She sees the scissors and injections alongside her bed. She injures the nurse and runs from there dressed in nurse’s uniform. Aryan meets Tanya and cries. He tells her everything and says Urvashi is ill, its my mistake, I wanted to run from my loneliness and found support in her. He asks Tanya to come with him home. Tanya hugs him and agrees. Urvashi comes home and gets the video of Tanya hugging Aryan. She takes out a gun and puts on her head. Aryan spends good time with Tanya and Vicky. He asks her to do the packing and he will book the flight tickets. Aryan leaves. Vicky plays with a toy gun and Urvashi comes to them.

Vicky sees Urvashi and smiles. Tanya asks Vicky to come and sleep. Urvashi comes to the room while Tanya is making Vicky sleep. Urvashi looks at Tanya and Vicky with anger. Tanya is shocked to see Urvashi. Urvashi tries to kill Tanya. Vicky calls Aryan. Aryan comes and stops Urvashi. Urvashi aims a gun on them. Aryan apologizes to her and says please let us go. Urvashi says you cheated me, what did you think you will ditch me and go like this. She says the same lines which Aryan told in Rohit’s character for the film. Aryan thinks of the scene and is surprised. He understands that Urvashi will do the same which he did in that scene.

He says no. She says don’t worry Aryan, I will not give you death. Aryan understands she will shoot herself and says no. She says I love you and puts the gun on her head. Aryan asks her to stop it. She shoots herself and dies infront of him. Tanya covers Vicky’s eyes. Kaisa ye ishq hai………… plays……….. Aryan hugs Tanya and they both cry seeing Urvashi. Hate can ruin everything but love can’t. Love is that which gives everything to the lover.