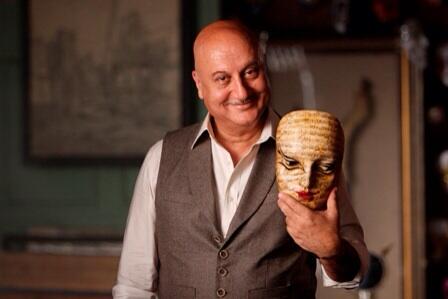 The Anupam Kher show has the format of a talk show with the veteran actor speaking candidly as well as posing tough questions. Actors, filmmakers. television and sports personalities are invited on his show. The show is very much related to his autobiographical play – Kuchh Bhi Ho Sakta Hai. The play highlights his journey of life, and how he overcome his failures and obstacles and earn success. With this show, he will converse with celebrities on their failures, obstacles, persistence, and success and would also relate to his own experiences with failures and success.

The first look (promo) shows the veteran actor – Anupam Kher moulding a sculpture and speaks that – a life hides many faces of people, and every face hides a life. He then talks – let’s hear from other person and also speak on his own experiences. Come, let’s talk on life. Anupam ji signs off by showing a face mask which essentially meant that he will unravel many facets of celebrities’ experiences which were not known or told before. Stay tuned to The Anupam Kher Show on Colors starting on 6th July.

Additional Notes:
* Anupam Kher was born on 7th march 1955. He has worked in 470 films till date and 100 plays. Apart from Bollywood, he has worked in Hollywood most notably the 2013 Oscar nominated movie – Silver Linings Playbook.
– Held the post of Chairman of the Censor Board and National School of Drama in India
– Honoured with the Padma Shri in 2004 by the Government of India for his contribution to Indian cinema.
– Won the Filmfare Award for Best Performance in a Comic Role five times, more than any other actor. Upcoming movie: Humpty Sharma ki Dulhania (Varun Dhawan, Alia Bhatt). Read more at his Wikipedia page.

* Anupam Kher runs an acting school – Actor Prepares in Mumbai, India. Its website, and Twitter page.
* After shooting with the veteran actor, SRK tweeted on Twitter,
– “It’s always nice to bare urself in front of people who have lived u unconditionally. Thanx Anupam for Kuch bhi ho sakta hai.”

* Veteran director and filmmaker Mahesh Bhatt have also echoed much appreciation for the show on Twitter.