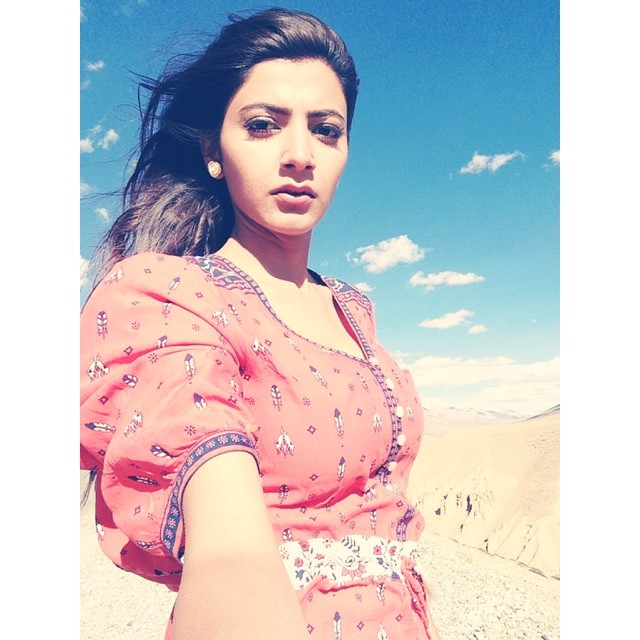 The story starts with Niyati watching some action scenes shown on TV and carries some expressions. Her father comes and she speaks fondly with him and calls him as the hero. He calls her as the inspiration and hero for her and she is the one who sees his stunts 100 times on TV. He reminds courage, focus and determination are the three things which she needs to remember in her life always. He was leaving and suggests that she will become a life hero unlike the hero in his movie’s poster. She greets her dad and asks him to come soon since they need to train next day.

Karan (the host) speaks that action stunts put so such efforts at a meagre pay and people believed that this work is for men and women are not suited. He speaks of Niyati’s aspirations to become a stunt woman and follow her father’s footsteps.

Niyati’s father didn’t came back after doing the stunt and died at the action scene. Niyati recollects the last scene with her father and cries during prayers at home. She gets some support from her father’s friend and other people and she tries to console her mother for their immense loss. She continues to recollect her father’s moments and her brother comes and informs of taking care of her and family. However, he suggests that she needs to help him and family. She informs her brother of doing the remaining stunts which her father didn’t complete. Her brother speaks of their didn’t got respect for his work and asks her to not think of working as stunt woman. Niyati is sad with her brother’s words and her mother reminds that she is adamant and stuborn like her father. She informs of not feeling shameful to know her husband’s work and instead is very proud. She encourages Niyati to carry on stunts and shows her support. Next day, Niyati reaches the stunt set and looks at many people coordinating to prepare for the stunt. The actor there is unhappy with the director’s assistants and wants some beautiful girls to get motivation. He calls himself as the action hero of the country. Niyati’s father friend Bhavik tells her to work as a junior artist and she needs to stand behind the actress. She speaks of fully prepared for doing stunts but he doesn’t listen.

After a while, in the night the stunt is taking place there and Niyati is seeing it. The action hero couldn’t do the stunt with the bike and the assistants suggests that action hero couldn’t do it and is taking retakes. Niyati suggests that the stunt is easy and even no need to change gear and while maintaining the bike on 2nd gear followed by strong accelerator and then popping the clutch which will make sure the bike will jump and maintain throttle. The action hero makes a taunt at Niyati and also at the stunt man there. He doesn’t want to do the stunt and asks the team to go on with the stunt with his body double and leaves. The stunt director asks Niyati how did she learn about Pop + jump technique for the stunt and she replies on learning from her father. He replies her technique is right and other coordination member speaks of calling the stunt man next day for the stunt. A stunt man acting as body double does the stunt but the bike skids and he falls down and gets injured and the helmet protected his life. The stunt master is pressurized to ask for another stunt man and it turns out that other stunt man are busy in their projects. Niyati goes to speak with the director and informs him of doing the stunt. The stunt master learns that she is the daughter of the stuntman Veerendra. He gives her one chance and production man Raj comes and speaks of arranging a stunt man but the stunt master speaks of giving one chance to Niyati.

Niyati prepares the stunt and recollects how her father taught about the stunt earlier and wears the helmet and drives the bike to act on the stunt and does it well. She is complemented for the stunt by the stunt master and the director and is finalized for the remaining stunts. However, the production man is not so happy. She comes home and gets complimented by her mother and informs that her brother have sent a letter. Niyati finds about appointment letter of a job and she speaks of respecting her brother and doesn’t want to hurt him and suggests that doing stunts is her dream. Her mother thinks that her brother will understand one day. Next day, as Niyati was going for the stunt, she gets a call from an Ad agency and she got hired for an action sequence and becomes much happy. She is recommended by the action director of her movie. Meanwhile, the action hero Avinash is giving an interview and the interviewer lady asks him that a girl has done all his stunts in the movie and acted as his body double and moreover all stunts were very dangerous. She wants to know his opinion. He gets nervous and doesn’t say anything. He goes straight to the set and confronts Raj – the production man. He also confronts the director and asks what joke is going on there since a girl is doing all his stunts. He boasts himself of being an action hero and will make sure a girl will not do the stunts. Niyati hears it and carries teary face and he comes to her and confronts and wants her to leave from the set. He also threatens her of dire consequences and even Raj is upset and asks her to leave. Niyati gets dejected and didn’t got any support from other people there.

Karan (the host) speaks that people says that talent is needed in this world but whether it is true. A man’s ego hit a girl and she is fired from the job. As a society we need to think what is important a person’s gender or the potential. What do you choose ?

One week later, Niyati’s contract with Ad agency also gets cancelled and she becomes upset and they inform her of not wanting to take any risk since people doesn’t want to see her doing stunts. Niyati cries in the room and recollects how Avinash verbally abused and even threatened. She also gets reminded of her brother’s words. She becomes quiet in the family and joins a reception desk job to support her family. At her office, she gets a call from Bhavik uncle asking her to come and collect her cheque at the set next day. At the set., Avinash is doing a stunt and he is going to jump from a top building and wants to prove the media that he can do his own stunts and doing show off. Avinash at his end is nervous and worried and have harness support for the jump. The media is seeing Avinash as he is about to perform the stunt. Meanwhile, she goes to take the cheque from Raj and he passes some taunts at her. Avinash jumps from the building but he couldn’t fall properly and instead gets stuck and hanging. It also turns out the harness cable was only one and it is about to break. The stunt master is angry since the safety measure was not done properly and Niyati runs to save Avinash’s life since his jacket is getting tear and harness is loosing support.

Niyati finds some rope and goes ahead herself to climb down with that harness in order to save his life. Other people are calling fire brigage but there is not much time. Niyati is gradually climbing down with her robe and Avinash begs Niyati to save his life. She comes close to him and finally gets hold of him and takes him with her. She is pulled from the top and finally takes him safely on the terrace. Avinash is angry at the stunt team and asks what if he was dead. Niyati leaves after saving him [Hala Bol song plays] and the media outside and other people applauds her and also her spirit. Niyati’s courageous attempt to save Avinash’s life is captured on camera and news channels are broadcasting it and seen by her family. She comes home and they worry about her. She speaks of feeling tired and will take rest. She gets a call and it is attended by her brother. He informs to the caller that she will come for the shooting. On that note, she hugs her brother and remembers her father. Avinash is giving another interview post his life recovery at the hands of Niyati. He admits that he is alive because of Niyati and hence have invited her for this talk show. Niyati is welcomed on the talk show and she thanks him and the host. He thanks her and speaks of owing his life to her. The host compliments Niyati on being a popular stuntwomen in a male dominated society and asks her how she did such a thing ? She recollects her father’s three words – Courage, focus, determination and calls father as her hero.

She speaks about those golden words because of which she has reached there and have set an example for her. She owed her life to him and her hero will be always her father. She also speaks fondly of her mother and calls her as lovely and also speaks on how her mother showed trust and also give freedom. Avinash regards Niyati better than him and asks her to work on his stunts in all his movies. She graciously accepts his offer and calls it as an honor.

Karan speaks that Niyat’s story deserved a happy ending and have realized her dream. There are more like Niyati and he speaks of a guest Minara – stuntwomen. Minara speaks of getting impressed with stunts right from her college days. Initially she got some taunts but once she did good work she got appreciation and respect. Karan speaks that girls are much capable and they know what they are doing and its their basic right.Karan signs off by asking the girls to have dreams since they are not lesser than anyone [Ladkiyan Kam Nahi in hindi].

Additional Note:
* We (TellyReviews) believe that Actors specially Yaushika portraying Niyati have given an amazing story to a layered, impactful and amazing story.  This particular episode should be in top 5 of the Halla Bol Season 1 and 2. Kudos to Yaushika, the team, Karan, and Bindass TV.

Info on CAST:
* Niyati is portrayed by actress Yaushika Verma
– Worked in a recent Bollywood movie – Yeh Hai Bakrapur whose plot is based on a social satire against the backdrop of rural India. Yeh Hai Bakrapur’s Wikipedia page. The movie was released on 9th May 2014 and got good reviews.
– She also worked in movie Yahan Sabki Lagi Hai (Everyone gets screwed here). The movie is yet to release and portrayed the role of Anamika.
– Recently worked in Bindass’ Yeh Hai Aashiqui Episode 63 aired on 31st August 2014 and played the role of Ishika. If interested, read that episode WU here.
– Yaushika’s Twitter page