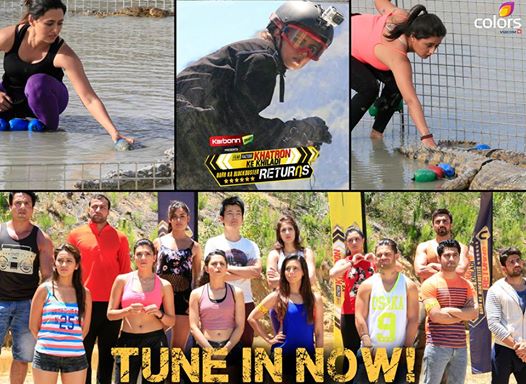 Khatron Ke Khiladi Darr Ka Blockbuster Returns [KKK 6] begins with its 1st Episode telecast. Rohit welcomes the contestants and pulls the leg of Archana as he comes to know that she is going to get married soon and she speaks of giving problem to her mother-in law. Hussain speaks about bringing medicines if needed and Rohit suggests the contestants to use will power and mind during the stunts. Rashami and Riddhi brings out the cray fish. Sana takes out the name of first three contestants – Chang, Sagarika and Harshad doing the first stunt. The stunt location of 1st stunt is Apollo Bricks and cod bikes are seen. Rohit wants to see Harshad’s romantic expressions who in turn do some fun banter with Sana. All stunts are under expert supervision and Rohit asks viewers to not try this.

1st STUNT: Gayi Bike Paani Mein
The contestant need to first dive into the water from the helicopter at a yellow baloon location, and then swim out of the water and climb the ladder at the shore and then get a key from the box to unlock the cod bike and then drive it on the ramp and after reaching the cliff point leaving the cod bike to fall in the lake and making yourself free to be taken away by the helicopter and it is a Time-based stunt.

Performers:
* Harshad Arora
Harshad dives and swims out of the lake and walks on the ladder and gets the key but couldn’t realize the direction of cod bike for few second. He then runs to the cod bike to unlock it and drives the cod bike on the ramp followed by taking over by the helicopter. After the stunt, Harshad speaks of diving in the water to be the difficult part.

* Sagarika Ghatge
She comes and speaks of not driving the bike in her life earlier. Sagarika completes her task with much quicker time.

* Meiyang Chang
He is worried about water and begins his task. During the stunt, he jumps on the bike awkwardly and completes the task. He thinks on his timing would match that of Harshad.

Rohit speaks of giving danger band/Fear band to the one taking the max time to complete the stunt and he/she has to participate in the elimination stunt. Results show – Harshad: 1:52 seconds, Chang: 1:29 seconds, Sagarika: 1:16 seconds. Harshad gets the first fear funda wrap. Rohit speaks about next stunt – Garland Ritual and suggests that crocodile is the groom.

2nd STUNT: No Agar Only Magar [No But Only Crocodile]
Rohit speaks there are 6 crocodiles in a pond and there are 3 colors of buoys (markers) attached to each crocodiles via hook. Once the contestant removes a boy of a particular color, the remaining boys should be fetched from the same color.

Performers:
* Ashish Chowdhry
He takes out the red buoy first and manages to pluck five out of total 6 buoys. For the last one, the crocodile tries to attack Ashish several times and thus he couldn’t pluck it. Ashish on a lighter note that the task is for Rakesh since he is in Kabbadi sports and plucking the buoys would be easier to him.

* Rashami Desai
She takes out the green buoy and manages to pluck all the 6 green buoys within 10 mins and maintained calm when she was in the pond.

* Sana Khan
She feels much fear at the start and manages to pluck the first blue buoy. Later, as she was removing one of the buoys the crocodile makes angry moves and there are several splashes in the water. She took 4 buoys and couldn’t manage to pluck the remaining buoys. She gets danger band and becomes 2nd contestant to participate in the elimination stunt along with Harshad.

The location is Blue Mandahl restaurant and it is the last stunt of the day. The contestants have to climb the aerial ramp which has the shape of reverse S and consists of horizontal ramps connected with ladders. After crossing three ramps and 2 ladders the contestant has to ring the bell.  Asha and Iqbal are the chosen contestants.

Performers:
* Iqbal Khan
He decides to crawl by sitting and crosses the first ramp and climbs the ladder to reach the second level. For the second ramp, he faces much difficulty as the rod is much narrow and as he was pushing his body with much difficulty was forced to turn upside down but manages to crawl faster which is suprising and reaches the ladder but couldn’t manage to get over to the ladder and falls down with the harnace cable. Rohit suggests that Iqbal couldn’t stand after crawling upside down. Iqbal calls the stunt as the toughest and also talks about narrow rod and stamina requirements

* Asha Negi
She speaks confidently on completing the stunt. She crawls on the first ramp and climbs the ladder swiftly. She reaches the second ramp which is much narrower and manages to reach the 2nd ladder. She climbs the ladder and then walks the 3rd ramp to complete her task by ringing the bell.

Performance of the Day: Rohit calls Asha’s stunt performance as that of the day. He also reminds that three girls have given the best performance – Sagarika, Rashami and Asha to the third one. Iqbal gets the fear funda wrap from Rohit and will participate in the elimination stunt next day.

Next Episode (tomorrow): Hussain is giving an Aerial stunt where he need to unlock locks in hanging glass chamber one by one and moreover the glass below him can fall any time. It so happens as he was finishing his stunt, the glass breaks and he falls down in the lake. During his stunt, he gets bruised on his chin. Siddharth participates in a glass chamber with worms and is upset. The Elimination stunt will decide the contestant going back home from Cape Town.