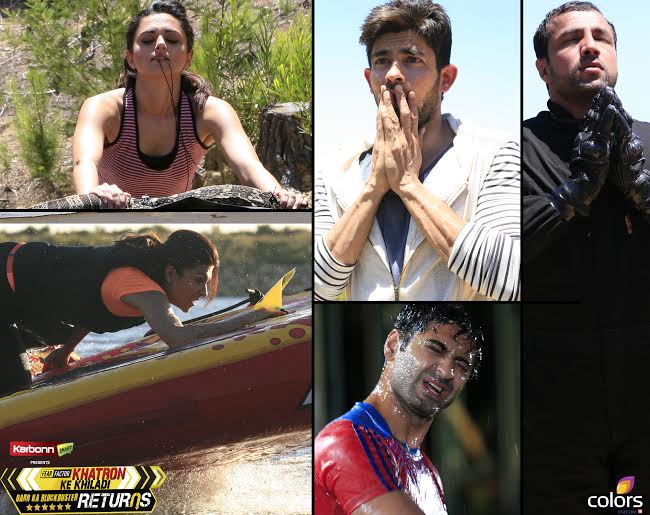 Rohit speaks about seeing the remaining 6 contestants performance today since 8 of them have given their performance yesterday.  Sana, Harshad and Iqbal will be taking part in the elimination stunt.

1st STUNT: Location – Blue Gum Trees, Sheesha Ha Ya Dil Akhil Tooth Jaata Hain:
There is a hanging aerial tunnel with glass case. The contestant needs to open four locks passing through each chamber in the tunnel and after reaching the 5th case need to unlock the shack attached to a robe. He/She then need to use the shack to break the glass below him and diving in the water. It is time-based stunt.

Performers:  A reptile chooses the ordering.
* Riddhi Dogra
Riddhi opens the first 4 locks with some difficulty and takes time to reach the 5th case and takes out the shack and hits the glass to dive in the water thereby completing her stunt. She took 4:59 seconds.

* Rakesh Kumar
He opens the first 4 locks and reaches the 5th case and completes his stunt in quick time with swift moments. He clocked 3:07 seconds.

* Hussain Kuwajerwala
He completes his stunt but have an awkward fall in water and gets a bruised chin. He clocked 2:57 seconds. Husain showed agility and swiftness during his task.

2nd STUNT: Location – Bluegum Dam: RAFTA RAFTA [As the contestant needs to move between tubes or rafts]
There is speed boat with three tubes. The contestant has to jump from 3rd tube to 1st tube and unlock the flag there and then come back to the 1st tube and lock the flag. The speed boat is taking turns and whirls for certain period and the one plucking and locking the max flags is the winner.

* Siddharth Bhardwaj
Siddharth manages to navigate through tubes to and forth unlocking and locking the flag and manages to put 3 flags and gets upset. He puts much energy but with winds and waves the tube get upside down.

* Nathalia Kaur
She speaks about the need of concentration than strength. She follows the strategy to crawl over the tubes to move over different tubes to and fro and manages to put 5 flags with much spirit and uses her energy smartly.

* Archana VIjaya
She managed to take out 5 flags with good spirit and determination but it turns out she locked only 4 flags.

Result: Siddharth gets the danger band and going to participate in the elimination stunt.

Fun Banter:
– Nathalia wants to teach Brazilian dance Samba to Rakesh. She teaches him Samba with a mix of Belly dance. Rakesh reciprocates by grooving on the Yamla Pagla Deewana dance moves of actor Dharmender.

There is a tunnel close to the ground  with glass chamber. The contestant will be on his back lying and pushing his body upwards during the stunt. He/she needs to pull a thread to extract a key and simultaneously a big bowl of fish waste, fish oil and worms will be thrown over the contestant in different chambers of the tunnel. After crossing the third chamber, the contestant needs to use the previous keys collected to open the locks in the last chamber [4th] thereby coming out of the tunnel. This stunt is also time-based. Moreover, during the stunt the contestant will also receive gush of water flowing towards him/her at moderate speed. Rohit tells the top 5 best performers to select the ordering and they inform the same.

* Siddharth Bhardwaj
Siddharth comes first but is bit upset on being selected firsts. He faces much difficulty to take out the first key as he was unable to remove it from the hook. He moves to the last chamber after passing through three chambers. He opens the locks with the previous keys to complete his stunt. Sid is upset after completing his stunt and blames his destiny on being the first one to perform.

* Harshad Arora
Harshad is a vegetarian but diligently gets ready for the stunt. He quickly reaches the last chamber and completes the stunt with much focus in very good time.

* Sana Khan
Sana at first goes to the last chamber after opening the two chambers and Rohit realizes her about the third chamber. She finally completes her stunt but breaks the rule by not being on back during the last stages of the stunt. Rohit notices her on breaking the rule.

* Iqbal Khan
After reaching the last chamber, Iqbal learns on losing one of the key and couldn’t come out. Also, he missed the 2nd chamber and did it in the last. He didn’t complete the stunt and got assisted by the crew to come out.

Rohit speaks about the stunt on KKK 6 and informs that all contestants will get hit and gets bruised, marks and rashes on the show. He reminds Siddharth on his words who was blaming time and destiny. He brings forward the case of Iqbal who couldn’t complete the stunt as he lost one of the keys and suggests his time was much wrong. He asks the contestants to prove themselves by stunt and downplays the drama quotient on the show. Iqbal speaks of feeling happy to do the stunt for his 3 year-old daughter. Rohit speaks that Iqbal will not leave and creates suspense that Sana will be eliminated since she broke the rule. But finally reveals no one will get eliminated since it is the 1st week. From next week onwards, regular elimination will follow and the contestant will be eliminated even in case when they don’t complete the stunt or break the rule. He asks the contestants to put their best performance and not just try to save yourself since the best performer will get advantage and its kind of a lifeline.

Next Week: There is Horror special. The contestants will do stunts with Cockroaches, riding car while breaking sheets of glass, water stunt – Archana is seen doing it and facing difficulty during the stunt. The fear factor will go a notch higher next week and tests the contestants’s mind endurance, spirit and determination yet again.