The valentine’s day celebrations are next in the show. Sahir and Aarzoo plan a surprise for each other and there is a series of sweet lovable moments between them. As the show is coming towards an end, the viewers will get to see the romance at its peak between the couple. After Sahir sings a song for her and she decorates the room to please her. Sahir and Aarzoo have an eyelock and get close. They shower love on each other. Sahir tells his feelings to her and she gets flowed in the moment. The couple will be consummating their marriage bringing romantic twists to the show. Watch out for the coming valentines day special episode. 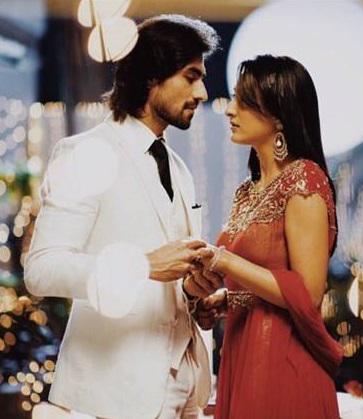 Yash acts filmi and proposes to Roshni by sitting on is knees and presenting a ring. This brings a storm in Roshni’s life. He knows that Roshni was dealing with her past and still he confesses his feelings. Sid is trying to impress DD and reach Roshni. Roshni is super shocked by Yash’s proposal. There is an interesting twist in the show. Will Roshni accept this proposal or will Sid wins her trust again?

After Soumya saves Suhani’s life and impresses Yuvraaj and others by showing her greatness, she herself evaluates the change in her that she risked Suhani’s life in her anger. Soumya rethinks about her decision to win Yuvraaj, and before she could think wise, the family heads back home. Soumya gets the evil company of Dadi once again who assures her that she will kick out Suhani by some plan very soon and make Yuvraaj marry Soumya. Dadi tells Soumya that she did not do any mistake, as everything is fair in love and war. Dadi asks Soumya to leave everything on her and hide her true feelings from Suhani. Soumya gets worried about Yuvraaj accepting Suhani by heart. Dadi plans to use Suhani’s dad Pankaj’s truth to threaten Yuvraaj and knows he is the weak link to break Yuvraaj and Suhani’s marriage.

Gunjan worries thinking about her pregnancy, when her career was taking a flight. She decides to abort the baby and is tensed as Ranvi’s reaction will be really bad knowing about her abortion. Veera tries to win Baldev’s heart and fails by Bansuri’s hurdles. Baldev tells Veera that even if he gives her numerous chances, only Ranvi will be important for her. Veera tries to clarify and makes a plan with Ranvi to take Baldev and Gunjan on valentine’s date. They plan surprises for their spouses and hope that everything gets well and all annoyance from Baldev’s heart is gone.

Chakor takes all the villagers and their kids to school in morning, to get admission. Bhaiya ji asks Chakor to reach on time to do the admission process of filling forms. Chakor and the villagers get excited seeing the school gate opening for them. They are asked to bring enough money towards admission fees and get stunned. The villagers ask Chakor about arranging fees and Chakor is clueless as Bhaiya ji did not tell her any such thing. Everyone start blaming Chakor for giving them hope and then breaking it. They all get sad and return home, having no money to pay to school. Chakor meets Baa and tells her everything. Baa goes to confront Bhaiya ji. Tejaswini answers on his behalf and covers Bhaiya ji’s true colors. Baa gets hugely disappointed.

Rain romance scene will be ahead between Rajat and Anu. The viewers will get to see love rekindling between them, but Anu still maintains her decision to marry Veer. During the engagement, everyone dance on music and Rajat asks Anu for a dance. The couple dances which makes Veer doubt on them. Veer gets irked and makes Anu wear the ring on some other finger, making engagement ritual fail. Veer acts angry after getting a parcel sent by Astha. Astha plans to make a big issue, but engagement gets done with peace. Anu meets Veer in a restaurant and he starts insulting her, to her shock. He leaves her alone and Rajat comes to her rescue, and drops her home.

Maya’s guilt makes her lead a simple life in an ashram, where she will be meeting Rudra’s mother (Played by Shruti Ulfat) Rudra’s Dadi will be meeting Maya taking her along. Maya comes to know about Rudra’s motive in his life. Dadi dislikes Maya for being member of Balivesh’s kund and hatches plan to protect Rudra, not knowing about Maya’s true love for Rudra. Latest revelation in the show is Shivanand being the prime Garuda to save Amrit, and begins his 24-year old research to find remaining six Garudas. He finds out that two of them are at same place and wonders about it. Its shown about Tiwari being a Garuda, as it gets revealed after a fight with Charles. With all the Garudas linking to each other in Mahakumbh, the seventh Garuda still remains a mystery.

Panchi sees a flower vendor ill treating his wife and taking his wife’s earrings forcefully and stands against him, giving him a lecture infront of everyone in the market. Rekha and Mukund witness this and Rekha assumes the reason why Govind made Titu marry Panchi. She feels Panchi’s boldness will not go well with Agarwal family, not knowing that Govind chose Panchi for her outspoken and right attitude towards life. Govind tries bringing Titu and Panchi closer, and Surekha determines to create hurdles for Panchi. How will Panchi manage her married life?

Shobha feels she lost everything in her life, and Vikram saves her life from an accident. Vikram’s love comes in her eyes as she senses his selfless bond with her. Vikram’s support becomes Shobha’s strength. He saves her once again when Sharda kicks out Shobha from her house, by not trusting her. Vikram defends Shobha and asks her to give back kids to Shobha. While Sharda supports Samarth this time, Vikram realizes Sarika’s plan to cut Shobha’s support pillars one by one. Vikram teams up with Shobha to expose Samarth by making him admit all his crimes, and even Sarika’s brother in law Anil joins hands with Vikram to expose Sarika in Abhay’s murder case.

Poorvi comes to know about Arjun’s sacrifices for her and is proud of his true love. Arjun unites Nisha and Lakshya and sends Watan to jail. Viraj makes Poorvi the head of the hotel project and she comes to know Arjun is behind her promotion. Poorvi and Arjun clear all their differences and get back to their love. Arjun and Poorvi’s union will mark the happy end of the show.

Ritika instills in RV that he loves Ishani who also loves him dearly. He gets motivated and his woes of Ishani’s divorce step gets relieved. Ishani asks Sharman to not doubt Ritika on having affair with RV and wants to prove him. She talks about the value of trust and doesn’t want to repeat her earlier mistake though has a tinge of doubt in her mind which would fade away quickly. In the track ahead, RV comes to Ishani and confesses his feelings of love for her yet again and realizes Chirag’s deception and fooling trick. He vents out his anger at Chirag and as he started breaking things Ishani gets hurt and he consoles her with love.  Ishani cries and gets teary eyed. Will Ishani and RV give a new kickstart to their relationship and love ? What about Sharman’s doubt on Ritika, Is he going to realize his mistake in judging her without proper knowledge of things ?

Abhiyankar, Anjali and Arjun are preparing for Everest summit after rescuing Nasir from Geneva Spur. Abhyinkar decides to go ahead as the team is close to Base 4 and Everest peak summit can be approached and moreover the weather is fine. Anjali with her immense focus and dedication has passed all the challenges leading to the decision on summing Everest and Abhiyankar informs her that summiting to peak has further new challenges. Meanwhile, Jagat goes through mix of shock and happiness to see Anjali going for Everest peak summit and her bravery story impresses him. Furthermore, Anjali gets much attention by Reena on news who regards her as inspiration for girls. Will Jagat wholeheartedly accept Anjali and do not differentiate on being a girl ? Arjun aims to get to the king’s sarpech but little he know that Reena has gotten info on Ramesh’s plan on stealing Sarpech and using Arjun for his mission. How does the sarpech mission play out in Abhiyankar-led Everest peak summit expedition ?