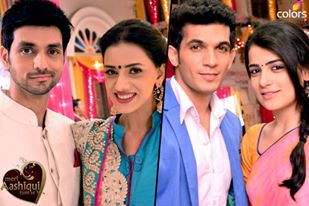 The truth of Ishani being alive was known to Derwash, Chaitali and now Amba also came to know of it when the minister spoke about his role in saving Ishani Parekh. With Amba, Ritika also gets to know about Ishani’s living existence. She goes ahead to visit the jail to inquire about Ishani and how she got released and when.  The jail in-charge informs that Ishani is alive and has left the jail. After getting confirmation on that revelation, Ritika as expected goes to RV with two things in her mind – whether to say the truth of Ishani being alive or to make up some story about Ishani and lie. Ritika earlier had an emotional conversation with RV who spoke of Ishani being alive for him always, and she also supported by saying that she can’t take his place.

On another front, Ishani continues to evade from RV’s eyes and took the identity of Nirupa Roy while devoting her time at NGO. Additionally, with Disha’s leaving the family – Manas and Kid, it puts much burden on her mom Falguni who is distraught at her daughter’s actions to leave the family. Disha has lied to a company of being unmarried since the job requirements wants the same, and it is the job of an international tour guide. For how long, Disha’s lie will help her in keeping the job, and once it is known, her wordly desires of not wanting to be poor at cost of family is going to get shattered.

Coming to Ritika and RV, with Ritika’s pregnancy and aspirations of full-fledged marriage with RV, and not just a name, Ishani’s truth of being alive to her holds prominence. What will be Ritika’s decision – selfish or selfless, and the former seems to be the obvious, though she can always leverage the sympathy angle ?

* We [TellyReviews] wish the best to Gauri Pradhan Tejwani in her future work endeavors, since she will take departure from the show as per the news. She portrays the role of Ishani’s mom Falguni in MATSH.